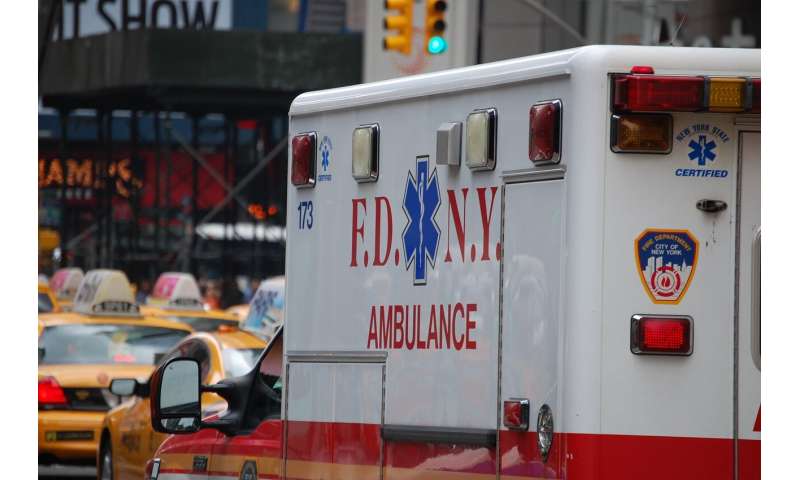 Some hospitals may strategically divert ambulances to avoid treating low‐paying patients who are uninsured or who have Medicaid, according to a recent analysis.

Charleen Hsuan, assistant professor of health policy and administration at Penn State, led a study that examined whether hospitals are more likely to temporarily close their emergency departments to ambulances—a process known as “ambulance diversion”—if neighboring hospitals were public instead of private.

The results—recently published in the journal Health Services Research—found that hospitals may be more likely to start diverting ambulances if nearby public, rather than private, hospitals are also diverting.

“Diversions act as a release valve. Once an emergency department has declared a diversion, others in the area are likely to follow,” said Hsuan. “When hospitals declare an ambulance diversion, a vulnerable population may be extraordinarily disadvantaged.”

Previous research suggests that minorities and people with low income are particularly affected by such ambulance diversions. According to the researchers, people who live in areas with restricted access to care are more likely to be affected. However, they may not realize it because in most cases, patients may not know they are being diverted to a hospital that is farther away.

For their analysis, Hsuan and colleagues examined inpatient and emergency department discharge data from California’s Office of Statewide Health Planning and Development data from California in 2007—examining only complete hospital diversions. The sample included 28 private hospitals, which were matched to 16 public hospitals of similar size and driving distance.

The researchers found that hospitals were about 3.6 percent more likely to start diverting ambulances if a nearby diverting hospital was public instead of private. In total, there were 6,516 diversions that happened after a neighboring public hospital started diverting.

According to the researchers, 263 of these diversions may not have occurred if the neighboring diverting hospital had been private instead of public.

Hsuan said the idea for the study came from a conversation she had with an emergency physician at a public hospital who shared with her that every time the hospital called for an ambulance diversion, hospitals surrounding the area would also call for one. Hsuan sought to find out what predictors may come into play for multiple hospitals to declare a diversion at the same time.