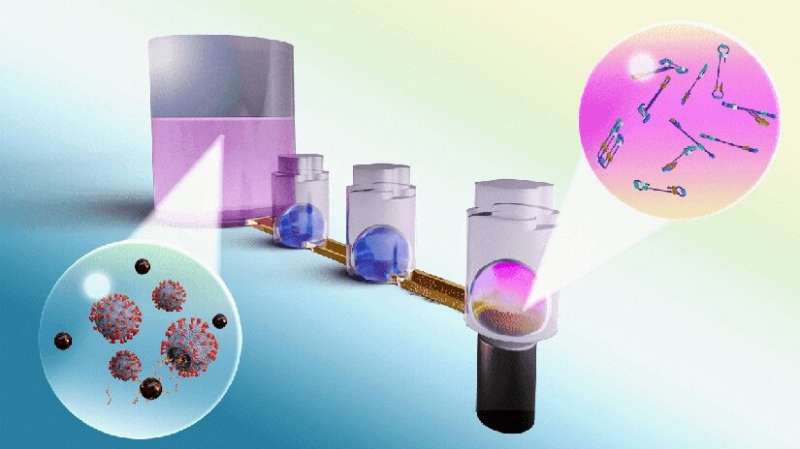 In early March 2020, just as the COVID-19 pandemic was forcing Duane Juang and other graduate student researchers at the University of Wisconsin-Madison to work remotely, the biomedical engineering Ph.D. student came across a Politico article. The story sounded a warning about how a dearth of lab supplies was hampering COVID testing across the United States.

Juang, who had experience working on fast, efficient diagnostic technologies in the lab of Professor David Beebe, emailed his mentor to ask if their research might offer a solution to the problem.

More than 18 months later, Juang has completed his Ph.D. and is working toward commercialization of a faster, simpler and less expensive alternative to PCR tests, the gold standard for detecting SARS-CoV-2. The test, which could easily be adapted to other infectious diseases, is based on an innovative combination of technology that he, Beebe, Ph.D. student Terry Juang and other UW-Madison collaborators outlined in a study published in the journal Nature Communications.

Given the costs and complexities of PCR-based tests, which need to be processed in large batches at a centralized lab, patients generally have to wait a minimum of 24 hours to receive their results. By contrast, the team’s Oil Immersed Lossless Total Analysis System (OIL-TAS) features a simpler setup, allowing it to produce results within an hour while requiring only minimal equipment.

Like a PCR-based test, the OIL-TAS uses RNA extraction and then a chemical reaction to detect nucleic acids from a virus (unlike antigen tests, which detect a protein on the surface of the virus and are less sensitive).

However, the OIL-TAS employs a rapid extraction method that Beebe’s lab pioneered. It eliminates the need to wash samples and relies on a less complex chemical assay (that’s also enclosed to decrease the risk of contamination) and a quicker detection technique that doesn’t require lengthy thermocycling. It also includes a microfluidic technology called exclusive liquid repellency, created by Beebe lab scientist Chao Li about five years ago, that prevents sample loss, safeguarding small, precious volumes. The researchers have filed several patents related to the technologies through the Wisconsin Alumni Research Foundation.

While Duane Juang concedes that the detection method in the OIL-TAS is less sensitive than PCR—the group’s test yielded a 93% agreement on positive results and a 100% agreement on negative ones compared to PCR when analyzing clinical SARS-CoV-2 samples—he says any positive results that it would miss would be in patients with low viral loads who are unlikely to transmit the virus.

While the ultimate goal of Juang’s ongoing work on the project with Flambeau Diagnostics (a spinoff of Salus Discovery, which is also among several Beebe spinoff ventures) is to create an at-home test, the road to regulatory approval is long and mired with hurdles. The first aim of the effort, which is being funded through a State Economic Engagement and Development (SEED) grant from the Wisconsin Economic Development Corporation via UW-Madison’s Discovery to Product office, is to create a rapid test for healthcare settings.

“This is a true lab-quality test in a point-of-care embodiment, and that’s pretty rare yet,” says Beebe, who’s also behind a Flambeau Diagnostics project to offer high-throughput, mobile rapid testing in lab-equipped vans in the Madison, Wisconsin, area, a venture funded through the government’s Operation Warp Speed initiative.

Beebe hopes that one silver lining of the COVID pandemic is the investment in new diagnostic technologies that will benefit humanity beyond one specific virus. He likens that aspect of Operation Warp Speed to NASA’s Apollo program, which accelerated development in computing, textiles, telecommunications and a whole host of fields.

Juang and Beebe both say their point-of-care test can be tweaked to detect other respiratory diseases like the flu and respiratory syncytial virus (RSV) … or future pandemic diseases.