Eggs are NOT bad for your heart: Thirty-year study finds eating one a day does not raise the risk of stroke or heart disease

Eggs will not increase your heart disease or stroke risk as previously feared, a thirty-year study has found.

Because of their cholesterol content, eggs have long been the subject of fierce debate around their role in causing heart problems.

But scientists say they have finally cracked the case – confirming that there is no link.

A US team, headed by a Harvard researcher, measured the diets of 215,618 healthy men and women who averaged one to five eggs a week for 32 years.

They found no association between egg intake and risk of cardiovascular disease (CVD) – which can lead to heart attack or stroke. 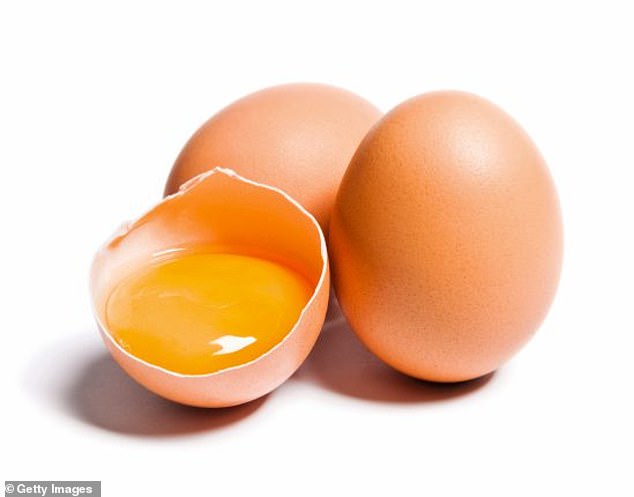 The findings, published in The British Medical Journal, did find that people who ate more than one egg a day had a higher risk, but they also tended to eat more red meat and have a higher body mass index.

Study author Dr Jean-Philippe Drouin-Chartier said: ‘The association between egg consumption and cardiovascular disease risk has been a topic of intense debate during the past decade.

‘Findings from previous studies on egg consumption and risk of cardiovascular disease have been inconclusive.

‘The results from our cohort study and updated meta analysis show that moderate egg consumption (up to one egg per day) is not associated with cardiovascular disease risk overall.

‘Results were similar for coronary heart disease and stroke.’

All were were free of CVD, type 2 diabetes and cancer at the start of the study.

When scientists checked in with their cohort a while later, there were 14,806 cases of CVD, including 9,010 cases of coronary heart disease and 5,903 cases of stroke.

Most people ate between one to five eggs per week, and those with a higher egg intake had a higher BMI, were less likely to be treated with statins – cholesterol lowering medication – and ate more red meat.

But there was no link between egg consumption and CVD risk after adjusting for age, lifestyle and dietary factors.

Participants were more at risk of CVD when researchers replaced one whole egg a day with a serving of processed red meat (15 per cent), unprocessed meat (10 per cent) or full fat milk (11 per cent).

WHAT IS A HEART ATTACK?

Figures suggest there are 200,000 hospital visits because of heart attacks in the UK each year, while there are around 800,000 annually in the US.

A heart attack, known medically as a myocardial infarction, occurs when the supply of blood to the heart is suddenly blocked.

Symptoms include chest pain, shortness of breath, and feeling weak and anxious.

Heart attacks are commonly caused by coronary heart disease, which can be brought on by smoking, high blood pressure and diabetes.

Treatment is usually medication to dissolve blots clots or surgery to remove the blockage.

Reduce your risk by not smoking, exercising regularly and drinking in moderation.

Heart attacks are different to a cardiac arrest, which occurs when the heart suddenly stops pumping blood around the body, usually due to a problem with electrical signals in the organ.

Foods such as fish, poultry, legumes, cheese and nuts in place of eggs were not linked to CVD risk.

The experts advised eggs are an affordable source of high-quality protein, iron and unsaturated fatty acids.

Professor Andrew Odegaard, at the University of California, said the results of the study are convincing – but ‘we should not put all our eggs in this observational basket for formal guidance on eating eggs’.

He said: ‘If frequent egg consumption is occurring in the context of an overall dietary pattern known to be cardioprotective, or eggs are being consumed for essential nutritional needs, then it is probably nothing to worry about.

‘Single foods could have contextual relevance for health, but a complex and extensive body of nutrition and dietary research really does support the current focus on overall dietary patterns in recommendations and guidelines.’

Dietitian Dr Carrie Ruxton commented on the findings, saying: ‘The debate about eggs and cholesterol has continued for years, despite public bodies in the UK and elsewhere saying time and again that eating eggs doesn’t present a risk to blood cholesterol levels or cardiovascular risk.’

‘This study is a helpful addition to our knowledge because it confirms that eating seven eggs a week is not linked to heart disease or stroke. It also backs up evidence from intervention trials which show no impact of egg consumption on blood cholesterol levels.

‘Given that eggs are rich in protein and nutrient-dense, providing one of the few dietary sources of vitamin D, it’s great that we can put people’s minds to rest’.

Lead researcher Dr Dominik Alexander, of the EpidStat Institute, US, said more research is needed to understand the connection between egg consumption and stroke risk.

But he added: ‘Eggs do have many positive nutritional attributes, including antioxidants, which have been shown to reduce oxidative stress and inflammation.

‘They are also an excellent source of protein, which has been related to lower blood pressure.’

The researchers added that their observational study could not say with certainty whether it was the eggs or meat or something else that caused the increase.

A previous study found that consuming just one egg a day reduces the risk of stroke by 12 percent.

And results from an updated meta-analysis of 28 observational studies with more than 1.7million participants further supports the lack of an association between egg intake and CVD risk.

But evidence did vary between studies conducted in the US, Europe and Asia.

Researchers said this may be due to eggs being included in a variety of Asian dishes while eggs tend to be eaten with red and processed meat in western populations.

CVD, a general term for conditions affecting the heart or blood vessels, is one of the main causes of death and disability in the UK.

WHAT IS CARDIOVASCULAR DISEASE AND WHAT CAUSES IT?

Cardiovascular disease (CVD) is a general term for conditions affecting the heart or blood vessels.

It’s usually associated with a build-up of fatty deposits inside the arteries (atherosclerosis) and an increased risk of blood clots.

It can also be associated with damage to arteries in organs such as the brain, heart, kidneys and eyes.

CVD is one of the main causes of death and disability in the UK, but it can often largely be prevented by leading a healthy lifestyle.

There are many different types of CVD. Four of the main types are described below.

Coronary heart disease occurs when the flow of oxygen-rich blood to the heart muscle is blocked or reduced.

This puts an increased strain on the heart, and can lead to:

A stroke is where the blood supply to part of the brain is cut off, which can cause brain damage and possibly death.

A transient ischaemic attack (also called a TIA or “mini-stroke”) is similar, but the blood flow to the brain is only temporarily disrupted.

The main symptoms of a stroke or TIA can be remembered with the word FAST, which stands for:

Peripheral arterial disease occurs when there’s a blockage in the arteries to the limbs, usually the legs.

dull or cramping leg pain, which is worse when walking and gets better with rest

hair loss on the legs and feet

numbness or weakness in the legs

persistent ulcers (open sores) on the feet and legs

Aortic diseases are a group of conditions affecting the aorta. This is the largest blood vessel in the body, which carries blood from the heart to the rest of the body.

One of most common aortic diseases is an aortic aneurysm, where the aorta becomes weakened and bulges outwards.

This doesn’t usually have any symptoms, but there’s a chance it could burst and cause life-threatening bleeding..

The exact cause of CVD isn’t clear, but there are lots of things that can increase your risk of getting it. These are called “risk factors”.

The more risk factors you have, the greater your chances of developing CVD.

If you’re over 40, you’ll be invited by your GP for an NHS Health Check every 5 years.

Part of this check involves assessing your individual CVD risk and advising you how to reduce it if necessary.