Health chiefs are set to announce a crackdown on salt levels in food after a damning report revealed two in three manufacturers missed Government targets.

Today’s Public Health England analysis found that while improvements have been made in certain produce – including breakfast cereals and baked beans – others have been ignored.

Meat products, such as sausages, mince and cooked meats, all failed to meet the recommended average levels, with 43 per cent exceeding the maximum target.

Only half – 52 per cent – of all average salt reduction targets for products consumed in the home were achieved last year. 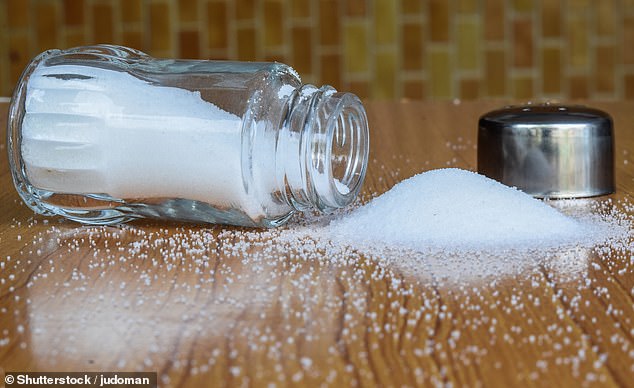 Campaigners said the failure to reduce salt further amounted to a ‘national tragedy’.

Professor Graham MacGregor, chairman of Action on Salt, said the result was that ‘thousands of unnecessary strokes and heart attacks have occurred and billions of pounds have been wasted by the NHS, and tragically more than 4,000 premature deaths per year have occurred.’

The NHS and World Health Organisation say adults should not have more than one teaspoon (6g) of salt a day.

Eating too much can put strain on the blood vessels and heart, raising the risk of high blood pressure, heart attack, heart failure and stroke. 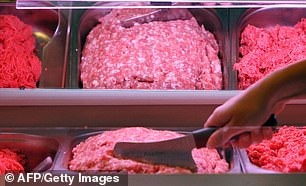 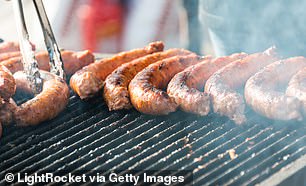 Meat products, such as sausages, mince and cooked meats, all failed to meet the recommended average levels, with 43 per cent exceeding the maximum target

The Government has been working for 12 years to encourage the food industry to voluntarily lower levels.

Shoppers in stores which banned treats at checkout queues bought 17 per cent fewer small packs of chocolate, sweets and crisps.

Impulse-buys of snacks to eat ‘on the go’ before getting home fell by three-quarters.

The Government is planning to ban the treat-laden ‘guilt aisles’ that see parents pestered for sweets by their children. A study led by the University of Cambridge and published in the journal PLOS Medicine looked at the six out of nine major supermarkets that have already brought in bans.

Co-author Dr Katrine Ejlerskov said: ‘Our findings suggest that, by removing sweets and crisps from the checkout, supermarkets can have a positive influence on the types of purchases their shoppers make.’

Training obese people in ‘mindfulness’ helps them slim, University of Warwick experts found. After just four 90-minute sessions, participants lost an average of 6.6lb in six months – far more than the 0.4lb lost by those who did not undergo the training.

Last month, Health Secretary Matt Hancock said salt intake had fallen by 11 per cent in under a decade, but if it fell by a third it would prevent 8,000 premature deaths and save the NHS more than £500million a year.

In categories such as pizzas, pasta, quiche, processed potato products, stocks and gravies, both manufacturers and retailers producing own-brand produce met all targets.

Yet meat products that were inherently salty, including bacon and sausages, had changed comparatively little.

Dr Alison Tedstone, PHE chief nutritionist, said: ‘While we have seen some progress, those that have taken little or no action cannot be excused for their inactivity.’

Companies were asked to meet average and maximum targets for salt content per 100g, with maximum targets ranging from 0.13g in canned vegetables to 3.75g in curry pastes.

Retailers were found to have made more progress than manufacturers towards achieving average targets, with 73 per cent success compared to 37 per cent.

Ready meals, soups, biscuits, rice, other cereals and meat alternatives did not meet any targets.

Overall, 81 per cent of products consumed in the home had sodium levels at or below their maximum target level.

Restaurants, takeaways and meal delivery businesses achieved 71 per cent below the maximum target levels, although health officials admit these targets are less stringent.