E-cigarettes ‘are NOT safe for your lungs’: Scientists discover vapers are nearly TWICE as likely to wheeze which can lead to acid reflux, heart failure and even cancer

E-cigarettes are not safe for your lungs, researchers have declared on the back of another worrying study into vaping.

Scientists found vapers are nearly twice as likely to suffer wheezing and difficulty breathing than those who do not smoke or use e-cigs.

These symptoms occur when the airways become inflamed and narrow, which can lead to COPD, acid reflux, heart failure and even lung cancer.

While e-cigarettes are generally thought to be less harmful than cigarettes, studies have linked their use to heart disease and cancer. 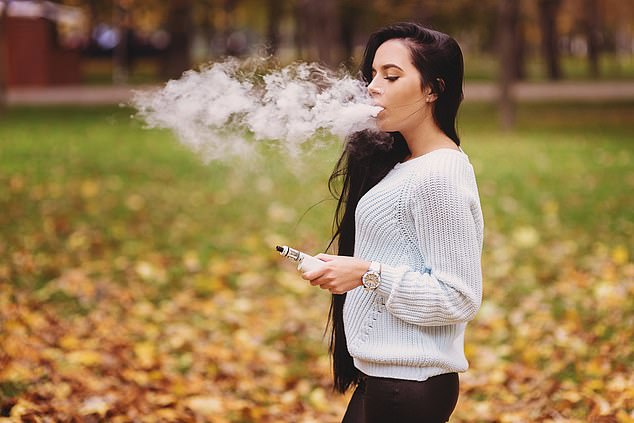 E-cigarettes ’cause signs of lung damage’, scientists have warned (stock)

The latest research, by the University of Rochester Medical Center, adds to the growing fears over the devices.

‘The take-home message is electronic cigarettes are not safe when it comes to lung health,’ study author Dr Deborah Ossip, a professor in the department of public health sciences, said.

‘The changes we’re seeing with vaping, both in laboratory experiments and studies of people who vape, are consistent with early signs of lung damage, which is very worrisome.’

Vaping is on the rise, with nearly 13 per cent of adults in the US having tried e-cigarettes, according to the National Center for Health Statistics.

And in the UK, 19.4 per cent of adults have tried an e-cig and 5.5 per cent still vape, according to the Office for National Statistics.

HOW COULD VAPING BE HARMFUL?

The flavourings in electronic cigarettes may damage blood vessels in the same way as heart disease, according to research published in June.

The chemicals used to give the vapour flavours, such as cinnamon, strawberry and banana, can cause inflammation in cells in the arteries, veins and heart.

They causes the body to react in a way that mimics the early signs of heart disease, heart attacks or strokes, the study by Boston University found.

Other recent studies have also suggested smoking e-cigarettes could cause DNA mutations which lead to cancer, and enable pneumonia-causing bacteria to stick to the lungs easier.

Researchers at New York University subjected human bladder and lung cells to e-cigarette vapor, which is marketed as being healthier than tobacco.

They found the cells mutated and became cancerous much faster than expected and mice exposed to the vapour also suffered significant DNA damage.

The vapour from e-cigarettes helps bacteria which cause the condition to stick to the cells that line the airways, they said.

The effect occurs with traditional cigarette smoke and those who are exposed to air pollution high in particulates from vehicle exhausts.

Figures have also shown a dramatic uptake of vaping among young people, with e-cig use rising by 78 per cent last year in those aged 14-to-17 in the US.

To better understand the safety of vaping, the researchers analysed 28,171 adults from the Population Assessment of Tobacco and Health study.

Results – published in the journal Tobacco Control – revealed vapers were 1.7 times more likely to experience wheezing and other respiratory symptoms.

This remained true even after adjusting for factors like BMI and secondhand smoke exposure.

But the vapers were less at risk than the smokers and dual users were just as at risk as the smokers.

The researchers stressed, however, they relied on the participants’ memories, with them being asked to recall whether they suffered wheezing after vaping.

There is also no evidence that e-cigarettes directly cause breathing difficulties, with the scientists just finding a link between the two.

Diet and activity levels can also influence our wheezing risk, and were not included in the study.

Small, sleek vaping devices like Juuls, which are used alongside flavoured nicotine pods, may lead to allergies and poor immunity, he claims.

E-cigarette emissions and flavourings have previously been linked to lung cell damage.

What is an e-cigarette and how is it different to smoking tobacco?

An electronic cigarette (e-cigarette) is a device that allows users to inhale nicotine by heating a vapour from a solution that contain nicotine, propylene and flavourings.

But while they have been branded as carrying a lower risk than cigarettes, an increasing swell of studies is showing health dangers.

E-cigarettes do not produce tar or carbon monoxide, but the vapor does contain some harmful chemicals.

Nicotine is the highly addictive chemical which makes it difficult for smokers to quit.

Very similar to normal e-cigarettes but with sleeker design and a higher concentration of nicotine.

Thanks to its ‘nicotine salts’, manufacturers claim one pod delivers the amount of nicotine as a pack of cigarettes.

It is composed of an e-cigarette (battery and temperature control), and a pod of e-liquid which is inserted at the end.

It is known as a ‘heat not burn’ smokeless device, heating tobacco but not burning it (at 350C compared to 600C as normal cigarettes do).

The company claims this method lowers users’ exposure to carcinogen from burning tobacco.