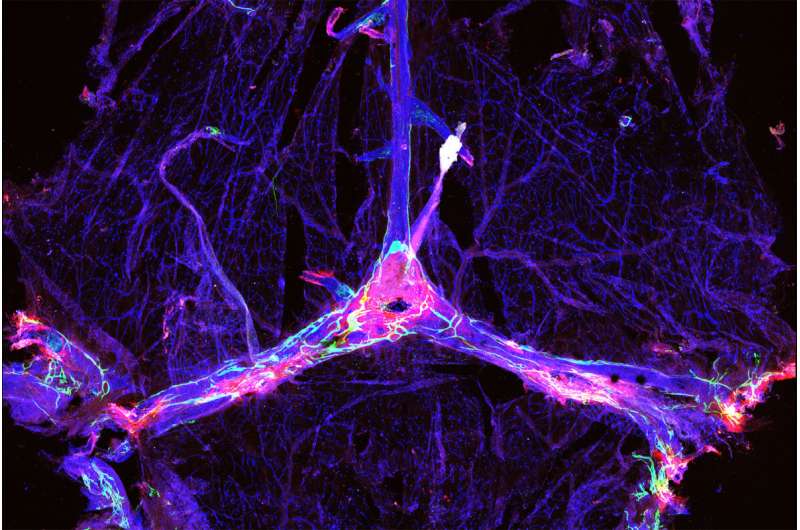 Experimental Alzheimer’s drugs have shown little success in slowing declines in memory and thinking, leaving scientists searching for explanations. But new research in mice has shown that some investigational Alzheimer’s therapies are more effective when paired with a treatment geared toward improving drainage of fluid—and debris—from the brain, according to a study led by researchers at Washington University School of Medicine in St. Louis.

The findings, published April 28 in the journal Nature, suggest that the brain’s drainage system—known as the meningeal lymphatics—plays a pivotal but underappreciated role in neurodegenerative disease, and that repairing faulty drains could be a key to unlocking the potential of certain Alzheimer’s therapies.

“The lymphatics are a sink,” said co-senior author Jonathan Kipnis, Ph.D., the Alan A. and Edith L. Wolff Distinguished Professor of Pathology & Immunology and a BJC Investigator. “Alzheimer’s and other neurodegenerative diseases such as Parkinson’s and frontotemporal dementia are characterized by protein aggregation in the brain. If you break up these aggregates but you have no way to get rid of the debris because your sink is clogged, you didn’t accomplish much. You have to unclog the sink to really solve the problem.”

Sticky plaques of the protein amyloid start forming in the brains of people with Alzheimer’s two decades or more before symptoms such as forgetfulness and confusion arise. For years, scientists have tried to treat Alzheimer’s by developing therapies that clear away such plaques but have had very limited success. One of the most promising candidates, aducanumab, recently proved effective at slowing cognitive decline in one clinical trial but failed in another, leaving scientists baffled.

Kipnis, who is also a professor of neurosurgery, of neurology and of neuroscience, identified meningeal lymphatics as the brain’s drainage system in 2015. A few years later, in 2018, he demonstrated that damage to the system increases amyloid buildup in mice. He suspects that the mixed and often disappointing performance of anti-amyloid drugs can be explained by differences in lymphatic function among Alzheimer’s patients. But proving this hunch has been challenging, as there are no tools to measure the health of a person’s meningeal lymphatics directly.

In this study, Kipnis and colleagues took an indirect approach to checking the drainage system in the brains of Alzheimer’s patients. The study was undertaken in collaboration with biotherapeutics company PureTech Health.

Thinking that the effects of a clogged drain might spill over onto microglia, the cells that serve as the brain’s cleanup crew, the researchers looked for evidence of lymphatic damage in the form of altered patterns of microglial gene expression. Microglia play a complicated role in Alzheimer’s disease: They seem to slow the growth of amyloid plaques early in the course of the disease but worsen neurological damage later on. The researchers disabled the meningeal lymphatics of a group of mice genetically prone to forming amyloid plaques, leaving the lymphatics functional in another group of mice for comparison, and analyzed the patterns of genes expressed by microglia.

Lymphatic dysfunction shifted microglia toward a state that was more likely to promote neurodegeneration. Further, when co-senior author Oscar Harari, Ph.D., an assistant professor of psychiatry and of genetics, compared the gene-expression patterns in microglia from mice and people—including 53 people who died with Alzheimer’s disease and nine who died with healthy brains—the people’s microglia most resembled those from mice with damaged lymphatics.

“There was a signature we found in the microglia from mice with ablated meningeal lymphatics,” Harari said. “When we harmonized the human and mouse microglial data, we found the same signature in the human data.”

Another cell type, endothelial cells that line the inside of lymphatic vessels, provided additional evidence for the importance of the brain’s drainage system. Co-senior author Carlos Cruchaga, Ph.D., a professor of psychiatry, of genetics and of neurology, identified the genes most highly expressed in lymphatic endothelial cells from mice. He discovered that genetic variations in many of the same genes have been linked to Alzheimer’s in people, suggesting that problems with the lymphatics might contribute to the disease.

“In the end, even though we’re looking at specific cell types and specific pathways, the brain is one big organ,” Cruchaga said. “The lymphatic system is how the garbage is cleaned out of the brain. If it’s not working, everything gets gummed up. If it starts working better, then everything in the brain works better. I think this is a very good example of how everything is connected, everything impacts brain health.”

To find out whether bolstering lymphatic function could help treat Alzheimer’s disease, the researchers studied mice genetically prone to developing amyloid plaques and whose lymphatics were impaired due to age or injury. They treated the animals with mouse versions of the experimental Alzheimer’s drugs aducanumab or BAN2401, along with vascular endothelial growth factor C, a compound that promotes the growth of lymphatic vessels. Combination therapy reduced amyloid deposits more than the anti-amyloid drugs alone.