A cheeky red, a buttery chardonnay, an organic G&T … Whichever way you drink it, alcohol remains the recreational drug of choice for many Australians.

We're drinking less of it than we used to – the lowest levels in more than 50 years, according to the most recent Australian Institute of Health and Welfare (AIHW) National Drug Strategy Household Survey.

In fact, only six per cent of nearly 2000 Australians polled by the Foundation for Alcohol Research and Education in 2018 reported that they drank every day. Most said they were “moderate drinkers” (having nine or fewer standard drinks per week); half said they drank one or two drinks in a single session; and a third said they drank between three and five.

And yet … we do hear a lot about the harm that alcohol continues to cause. More harm, overall in Australia, than 22 illicit drugs including heroin and ice, according to another recent study.

So, really, how concerned should we be? Do merely moderate drinkers have any reason to worry about booze? What difference does a pinot or two at the end of the day really make? Come to think of it, isn't a tipple of red good for you? 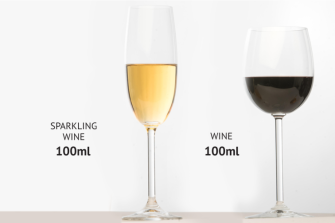 Two standard drinks a day will put you at low risk of developing an alcohol-related disease or injury.Credit:Simon Schluter

How much is too much?

Many countries have guidelines around “safe-enough” drinking levels. In the UK, men and women are advised to drink no more than seven pints of beer a week. In the US, dietary guidelines recommend limiting drinking to one drink a day for women, two for men. In Spain, the standard for men is four drinks a day and two for women.

In Australia, the National Health and Medical Research Council (NHMRC) recommends that healthy men and women should drink no more than two standard drinks on any day.

What they mean is that two drinks – that’s 20 grams or 25ml of pure ethyl alcohol – will put you at low risk, but not no risk, of developing an alcohol-related disease and/or of being injured over your lifetime.

The guidelines, released back in 2009, are being revised and will be released to the public for feedback this year. The previous advice, from 2001, was the same for women but allowed men four standard drinks a day.

Times change and scientific evidence evolves. Is our yardstick for “safe-enough” drinking about to change again?

The National Health and Medical Research Council, which sets the guidelines, won’t say yet.

What will two drinks a day put you at low risk of, exactly?

First, the bad news. Alcohol is classed as a known human carcinogen by the United Nations International Agency for Research on Cancer; it's on a long, A-Z list that starts with acetaldehyde, which your liver produces when it breaks down alcohol, and ends with X- and gamma radiation. Drinking alcohol, says the international agency, increases your risk of developing mouth, pharyngeal, laryngeal, oesophageal, colorectal, liver and, for women, breast cancers.

This is backed by an analysis of 527 studies published between 1956 and 2012 and documenting a total of nearly half-a-million cancer cases. The analysis, in the British Journal of Cancer, adds more sad news: there is accumulating evidence that drinking booze is associated with pancreatic and prostate cancers and melanoma.

Drinking alcohol has also been found to contribute to dementia and to escalate learning and cognitive difficulties in people who already have them.

“Alcohol is closely related to around 60 different diagnoses,” says the World Health Organisation, “and for almost all there is a close dose-response relationship, so the more you drink, the higher your risk of disease. Less is better.”

The analysis of half a million cancer cases found that heavy drinkers were five times more likely to develop mouth, throat and oesophagus cancers than non- or occasional drinkers, and twice as likely to develop liver cancer.

But – brace yourself – moderate and even light drinkers were not exempt. Light drinking was associated with cancer of the oral cavity and pharynx, oesophagus and, in women, breast. Colorectal and laryngeal (voice box) cancer came into the picture with moderate drinking, defined as between 12.5 grams and 50 grams a day – so including two-glass-a-day drinkers.

A study of the burden created by alcohol use in 195 countries between 1990 and 2016 reiterates that moderate drinking carries risks. The lead author of the study, Dr Max Griswold, says “based off our study, two standard drinks [as a guideline] is too high.”

“At most, our study would recommend zero to one standard drinks a day, so the same as the Netherlands – with an emphasis on zero.” 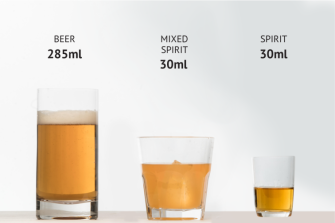 Should women drink less than men?

Yes. “The current guidelines don't distinguish between men and women but my understanding is that women are more sensitive to the long-term effects of alcohol,” says Turning Point’s clinical director, Dr Matthew Frei.

Studies show that women actually produce smaller quantities of an enzyme called alcohol dehydrogenase (ADH), which is released in the liver and breaks down alcohol in the body.

Women also tend to have higher levels of body fat and lower levels of body water than men, which also influences alcohol absorption rates and amount, as fat retains alcohol. So the rule of thumb that it takes the body about an hour to break down a drink may apply differently to women just as it varies depending on a man's build and metabolism.

Women are faster to experience alcohol-induced liver disease and damage to their hearts and nerves as well as their brains. And the American Cancer Society says women who have two or three alcoholic drinks per day have a 20 per cent higher risk of breast cancer compared to non-drinkers, one reason being that alcohol increases oestrogen and androgen levels.

But “when writing the guidelines,” says Dr Frei, “I think a decision was made to lump men and women together in order to establish an easy-to-remember number. Two drinks are easier to recall than one-and-a-half (for women).” 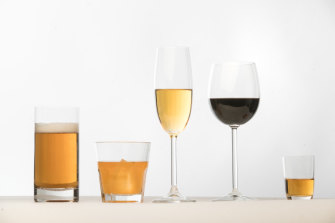 Some cancers are associated with drinking alcohol.Credit:Simon Schluter

Where's the good news? Isn’t alcohol good for you in small doses?

Not really. Well, there is evidence that small amounts of alcohol can be good for the heart and circulatory system (and even protect against type 2 diabetes and gallstones).

Some studies show that moderate consumption can reduce the risk of heart attack, ischemic (clot-caused) stroke, peripheral vascular disease, sudden cardiac death and death from all cardiovascular causes by 25 to 40 per cent.

But even if you could target alcohol to specific organs of the body for specific purposes, the harms to other parts of the body remain clear.

“What many people don't realise is that alcohol affects virtually every organ system in the body,” says Associate Professor Yvonne Bonomo, an addiction medicine specialist and lead researcher for the St Vincent's Hospital national study.

“It can affect liver function, eventually leading to cirrhosis (scarring of the liver); affect the actual heart muscle and cause heart arrhythmia (irregular heartbeat); increase blood pressure and even increase the chance of brain injury.”

“When you weigh up the risk versus any potential benefits,” says Associate Professor Bonomo, “the risks outweigh the benefits.” 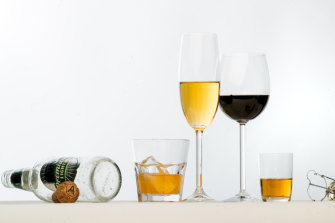 It's not often talked about but the wheels can fall off – in an instant or over a lifetime – when you've been drinking.Credit:Simon Schluter

Seriously, how can an occasional bottle of chardonnay hurt?

It may not but there are a host of less-talked-about unforseen consequences that come with even occasional drinking.

Most people are not alcoholics – most of the alcohol in Australia is consumed by one-fifth of our population, according to a 2016 report by FARE.

But Sam Biondo, executive officer of the Victorian Alcohol and Drug Association, can number off the alcohol-related scenarios involving “moderate” drinkers that end up being life-changing, whether because they are corrosive over time or sudden and traumatic.

“Take women who are pregnant. If they don't know they’re pregnant, people can find themselves consuming more alcohol than they should, which could lead to complications for the unborn child,” Mr Biondo says.

“Then there’s people who are normally quite peaceful and law-abiding who get themselves into king-hit scenarios after bingeing.

“Personal relationships get put under pressure, and then there’s the family violence that occurs.”

In its pre-budget 2017-18 submission to Treasury, FARE said while 15 Australians die of alcohol-related causes every day, a further 430 are hospitalised because of booze. That's 430 people who end up in A&E after having a drink.

“These figures understate the significant impact that some individuals’ alcohol use has on others,” says Mr Biondo, “including violence on our streets and in our homes, vandalism, road traffic accidents, child maltreatment and neglect, and lost productivity in the workplace.”

Mr Biondo says it’s not enough to just blame the consumer, and points to “direct marketing of alcohol across a whole range of mediums to target consumers and make a profit”.

“We perpetually target and blame the victim, which is often dressed up in language commenting on their inability to moderate their behaviour. But where is the conversation about different parties’ social responsibilities?

“It’s not just those using alcohol, but those placing it in front of us who are constantly normalising drinking in Australia.”

Recent revelations that the alcohol industry is helping the government form its new national alcohol strategy could be seen as a case in point.

What would a doctor do?

“Doctors are human, and different doctors will have different approaches to alcohol,” Associate Professor Bonomo says. “Some won’t drink at all, and others are more philosophical about it; they know the risk and will choose to drink in moderation.”

“This might not be the answer people want to hear,” says Dr Lars Møller, programme manager of alcohol and illicit drugs at the World Health Organisation in Europe, “but there is no safe level for drinking alcohol.

“Of course, there is lower-risk drinking, but WHO does not set particular limits, because the evidence shows that the ideal situation for health is to not drink at all.”