Douglas F. Covey, PhD, a leader in the development of a new class of drugs — neurosteroids — to treat mental illness, has been installed as the inaugural Andrew C. and Barbara B. Taylor Distinguished Professor of Psychiatry at Washington University School of Medicine in St. Louis.

The professorship was established through a gift from philanthropists Andrew and Barbara Taylor and the Crawford Taylor Foundation to support the Taylor Family Institute for Innovative Psychiatric Research, established in 2012 at the School of Medicine with an initial $20 million gift from the family. Researchers at the institute, including Covey, investigate the scientific underpinnings of psychiatric illnesses, with the goal of improving diagnosis and treatment.

Covey is a specialist in the chemistry and biology of steroids and has spent years synthesizing and developing neurosteroid molecules that soon may provide new tools for psychiatric treatment. He was installed by then-Chancellor Mark S. Wrighton and David H. Perlmutter, MD, executive vice chancellor for medical affairs, the George and Carol Bauer Dean of the School of Medicine, and the Spencer T. and Ann W. Olin Distinguished Professor.

“We are grateful for the generosity of Andy and Barbara Taylor and the Crawford Taylor Foundation,” said Wrighton, now chancellor emeritus. “This professorship is only one part of a substantial gift that is helping bolster and expand the work of Douglas Covey and the other scientists at the Taylor Family Institute as they work to develop more effective treatments for people with psychiatric illness.”

“Dr. Covey’s work isolating and synthesizing neurosteroids has great potential to help patients with psychiatric illness,” Perlmutter said. “We’re grateful for the Taylors’ generous investments in this professorship and in the Taylor Family Institute to support the work of researchers such as Doug Covey. The Taylors’ dedication enables scientists like Dr. Covey to focus attention on finding better treatments for the thousands of patients suffering from mental illness who do not benefit from current therapies.”

Covey studies how neurosteroids work as anesthetics and analgesics and has been analyzing their potential to treat neurodegeneration and psychiatric illnesses, particularly depression. His laboratory is developing methods to determine exactly how neurosteroid molecules bind to proteins on neurons and other cells in the central nervous system.

For more than two decades, one of Covey’s close collaborators has been Charles F. Zorumski, MD, the Samuel B. Guzé Professor, head of the Department of Psychiatry and director of the Taylor Family Institute.

“Doug has studied natural neurosteroids and developed scores of synthetic neurosteroid molecules, some of which have therapeutic potential,” Zorumski said. “Although existing medications help many psychiatric patients, current therapies don’t work for everyone. The compounds Doug is developing may help those who don’t benefit from current medications. His work actually helped spur the pharmaceutical company Sage Therapeutics to work with us at Washington University to discover, develop and test neurosteroids.”

In its first seven years, the Taylor Family Institute for Innovative Psychiatric Research has made significant progress in understanding how neurosteroids and related molecules called oxysterols regulate brain function. To accelerate the progress of this work and expand its application, the Taylors and the Crawford Taylor Foundation committed an additional $10 million to the institute to support more research and to endow this professorship.

“I am honored to receive this recognition and to serve in a professorship that bears the name of a family whose generosity has made so much of this work possible,” Covey said. “We have been studying neurosteroids for a few decades now, and it is very gratifying to see our work beginning to bear fruit.”

Andrew C. Taylor is executive chairman of St. Louis-based Enterprise Holdings, which his father, the late Jack Taylor, founded in 1957. After earning his bachelor’s degree from the University of Denver in 1970, Andrew Taylor worked for RLM Leasing, a Ford Motor company affiliate. He returned to Enterprise three years later. In 1976, he was named general manager of Enterprise Rent-A-Car’s St. Louis regional operations. Over the next four decades, he served as the company’s president and chief operating officer, CEO and chairman. He assumed his current role as executive chairman in 2013. Now called Enterprise Holdings, the company is the most comprehensive service provider — and the only investment-grade company — in the U.S rental car industry.

Civically minded, Taylor is a board member for the Naval Aviation History Foundation and the Missouri Botanical Garden. He also is a Washington University life trustee, and he served as chair of the public phase of Leading Together: The Campaign for Washington University, the university’s recently concluded capital campaign.

Barbara Taylor, who earned a bachelor’s degree in psychology from the University of San Francisco, is an honorary trustee and former president of the Board of Commissioners for the Saint Louis Art Museum. She also is a trustee and member of the executive committee of Forest Park Forever. She previously served as a trustee for Webster University and Mary Institute and Saint Louis Country Day School, and she has held leadership positions with the Junior League of St. Louis and St. Louis Children’s Hospital.

The Taylors and Enterprise Holdings have contributed more than $100 million to Washington University through gifts, including $70 million to establish and expand the Enterprise Holdings Scholars program, which has helped more than 330 students. In 2009, Washington University presented the Taylors with the Jane and Whitney Harris St. Louis Community Service Award, and in 2018, Andrew and Barbara Taylor were recognized with the Robert S. Brookings Award for their dedication to the university.

“It’s tremendously exciting to think that this professorship to advance Dr. Covey’s work at the Taylor Family Institute, as well as the other collaborations at the institute, have such great potential to help people,” Andrew Taylor said. “We are proud to do our part to support the institute’s innovative research and confident its researchers will unveil new ways to help people coping with mental illness.”

The Crawford Taylor Foundation — the charity of the Jack C. Taylor family — is committed to enabling and enhancing programs that create lasting legacies in St. Louis, particularly community development programs that amplify St. Louis’ reputation nationally and internationally. It also funds programs that assist women and youth; animal welfare groups whose efforts focus on rescue and rehabilitation of animals; and organizations aimed at preventing cruelty to animals. In addition, the foundation supports the preservation of parks and places of natural beauty, and development of long-term environmental solutions. 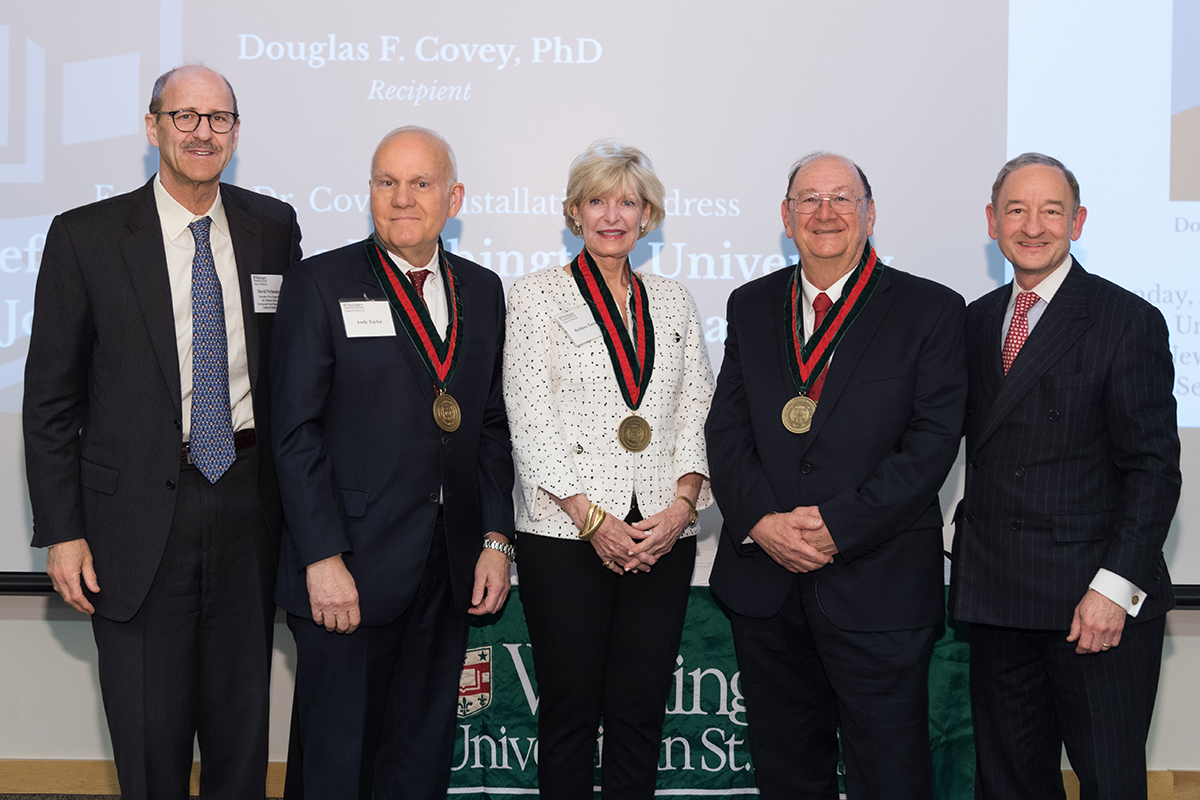