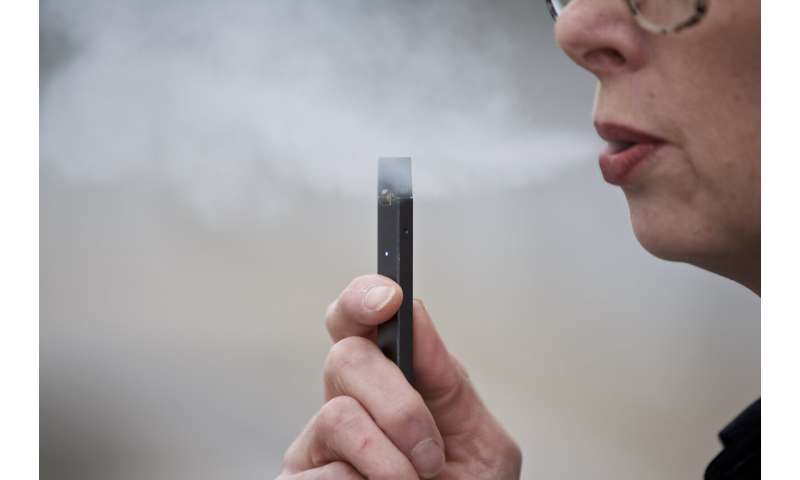 The young models and the candy-colored graphics that helped propel Juul to the top of the e-cigarette market are gone. In their place are people like Carolyn, a 54-year-old former smoker featured in new TV commercials touting Juul as an alternative for middle-age smokers.

“I don’t think anyone including myself thought that I could make the switch,” Carolyn says, sitting in a suburban living room as piano music quietly plays in the background.

The tagline: “Make the switch.”

Under intense scrutiny amid a wave of underage vaping, Juul is pushing into television with a multimillion-dollar campaign rebranding itself as a stop-smoking aid for adults trying to kick cigarettes. But the strategy is raising concerns from anti-smoking experts and activists who say the company is making unproven claims for its product.

On Thursday, six anti-tobacco and health groups called on the Food and Drug Administration, which regulates e-cigarettes, to investigate Juul’s marketing efforts across TV, radio and other formats.

“Juul, a product that FDA has found to be largely responsible for the current epidemic of youth usage of highly addictive e-cigarettes, is being advertised and marketed on a massive scale as a smoking cessation product, without the required review and approval by FDA,” said the letter from the American Heart Association, the Truth Initiative, the American Academy of Pediatrics and three other groups.

In a statement, FDA spokesman Michael Felberbaum said only that the agency “continues to closely scrutinize potentially false, misleading or unsubstantiated claims” to make sure the public is “not misled into mistakenly using inherently dangerous tobacco products for medical uses.” 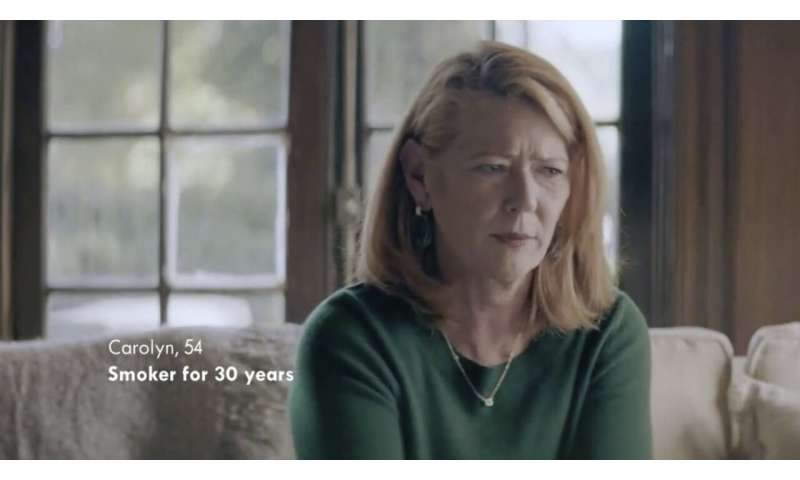 Neither Juul nor any other e-cigarette has been approved by the FDA to help smokers quit.

Indeed, Juul’s website carries the disclaimer: “Juul products are not intended to be used as cessation products, including for the cure or treatment of nicotine addiction”—a point underscored Thursday by a Juul representative.

Over the past half-century, the FDA has granted approval to just a few kick-the-habit products, including nicotine gums, patches, lozenges and prescription drugs.

Anti-tobacco experts are perplexed that the FDA hasn’t stopped Juul from pitching its nicotine-emitting device to millions of American smokers looking to quit cigarettes.

“I think Juul is skirting the edge of the law, and I think that the FDA is letting them get away with it,” said Stan Glantz, a tobacco control researcher at the University of California San Francisco.

FDA enforcement is especially important, Glantz and others argue, because e-cigarettes are not subject to the decades-old laws that ban advertising of traditional cigarettes on TV, radio and billboards.

Most experts agree e-cigarettes are less harmful than the paper-and-tobacco variety because they don’t produce all the cancer-causing byproducts found in smoke. 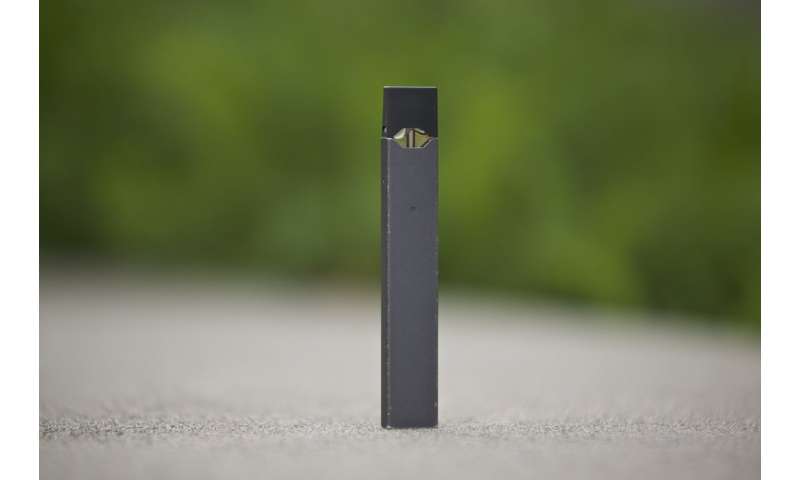 But researchers are only beginning to understand the unique risks of e-cigarettes, which emerging science suggests can damage the lungs and airways and contribute to precancerous growths. Those risks have led some experts to conclude that smokers who use both cigarettes and e-cigarettes are unlikely to get any health benefit.

Survey and study results suggest about 10% to 30% of smokers who vape are able to quit cigarettes. The rest use both products.

Juul points to recent survey results that suggest nearly 50% of smokers who tried Juul stopped using cigarettes within three months. The company-funded research is based on online questionnaires. Participants did not undergo chemical testing to verify they had quit, a technique used in more rigorous studies.

Juul spent more than $11.8 million on the TV ads over the first four months of the year, according to ad tracker iSpot.tv. The spots aired more than 2,800 times on cable channels including A&E, the Food Network and the Discovery Channel.

The TV campaign followed more than $75 million in spending on radio, print, online and outdoor display advertising last year, according to Kantar, a tracking and analytics company. That was more than what was spent by tobacco giant Altria, the maker of Marlboro cigarettes and a recent investor in Juul. Because of the restrictions on tobacco advertising, Altria and other tobacco companies spend most of their marketing budgets on in-store displays and promotional mailings to smokers.

The Juul ads carefully avoid key words associated with FDA-approved smoking aids, such as “quit,” ”addiction” and “health.” Instead, the company’s testimonials refer to “switching” to Juul to get a “nicotine fix” and “improve” one’s life.

“I think the Juul ads are very carefully written and lawyered to confuse the public,” Glantz said. 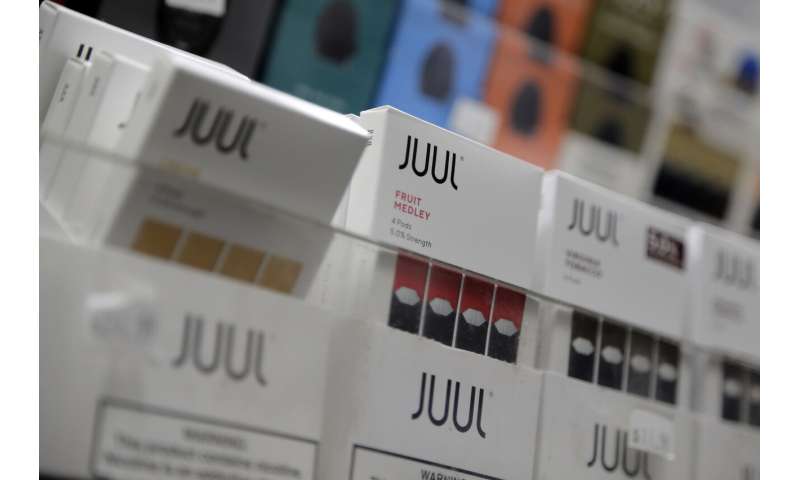 The FDA has broad leeway to decide which regulations it will actually enforce. In the case of e-cigarettes, all vaping products now on the market are technically illegal, under an Obama-era regulation that required manufacturers to submit applications by 2018. But recently departed FDA Commissioner Scott Gottlieb decided the FDA would not enforce the policy until 2021, in part because of industry complaints that earlier regulation would wipe out most vaping businesses.

“There are a ton of non-enforcement decisions going on at FDA, and that’s clearly what’s happened with the advertising by Juul,” said Eric Lindblom of Georgetown University’s law school, who previously served as a senior official in the FDA’s tobacco center.

The light U.S. approach to regulation contrasts with that of Europe, where nicotine levels are capped and advertising is tightly restricted.

Britain and other countries have had success promoting e-cigarettes as a reduced-risk product to smokers without seeing the surge in underage vaping gripping the U.S. But they also ban most e-cigarette advertisements from television, newspapers, magazines and websites.

Paul Cheeseman of Philadelphia said smokers may need to try a number of options before finding something that helps them quit. The 37-year-old accountant quit smoking two years ago after a neighbor gave him a Juul device he had confiscated from his child.

Cheeseman said he thinks the Juul ads are effective because they tap into smokers’ negative feelings about being “controlled by the ritual of smoking.” He said Juul works because it helps replace both the nicotine and the physical ritual of smoking.