Cancer sufferer, 26, having a testicle removed had a surprise pre-surgery ‘ball voyage’ bash organised by loved-ones who blasted ‘Great Balls of Fire’ and ‘Wrecking Ball’ to guests

A 26-year-old man had a ‘ball voyage’ bash for one of his testicles before having it surgically removed following a cancer diagnosis.

Justin Robertson noticed his left testicle was enlarged in July 2016 after moving to London for a job in advertising, but found excuses not to see a doctor.

He finally plucked up the courage to walk into a clinic on the advice of his concerned girlfriend, and tests revealed a cancerous lump

Mr Robertson, originally from Bournemouth, Dorset, was told the testicle needed to be removed.

But knowing his sunny sense of humour, his family and friends organised a special surprise send-off for his testicle days before his operation that November. 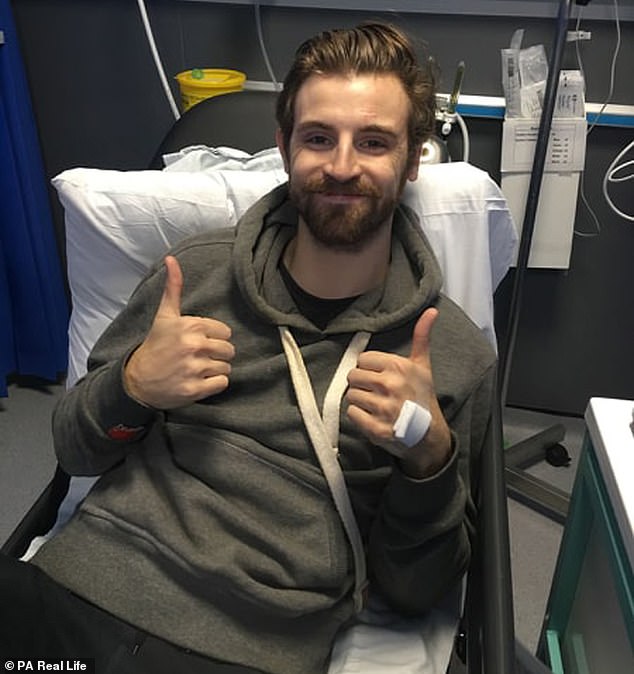 Justin Robertson, 26, after having his left testicle removed in November 2016 following a cancer diagnosis 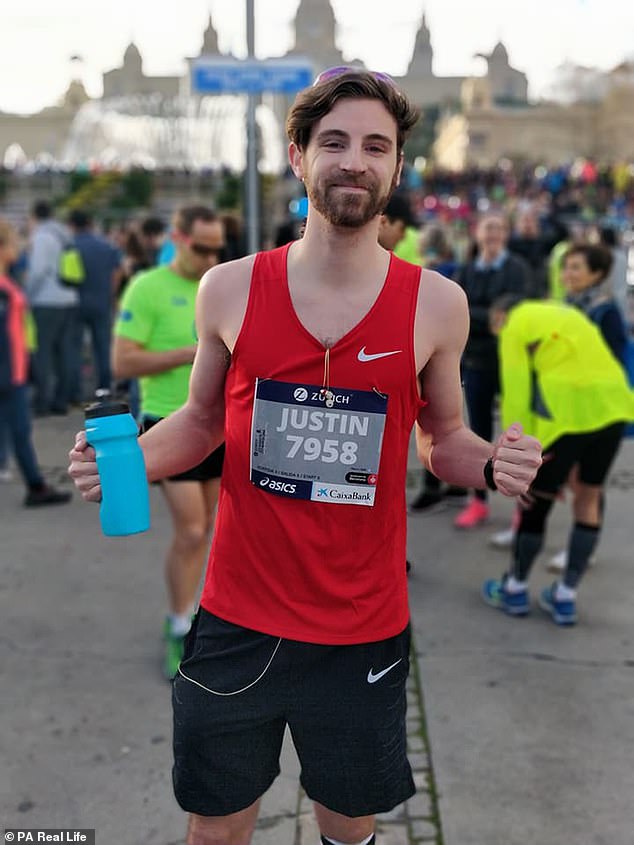 Mr Robertson said: ‘One minute I was walking into a routine health check-up and the next I was being told I was losing a testicle.’

‘I couldn’t believe it when I stepped through the door and all my friends and family were shouting, “ball-voyage” in honour of my soon-to-be-departed left testicle.’

His friends laid out tables packed with spherical snacks, such meatballs and stuffing, along with a selection of nuts. 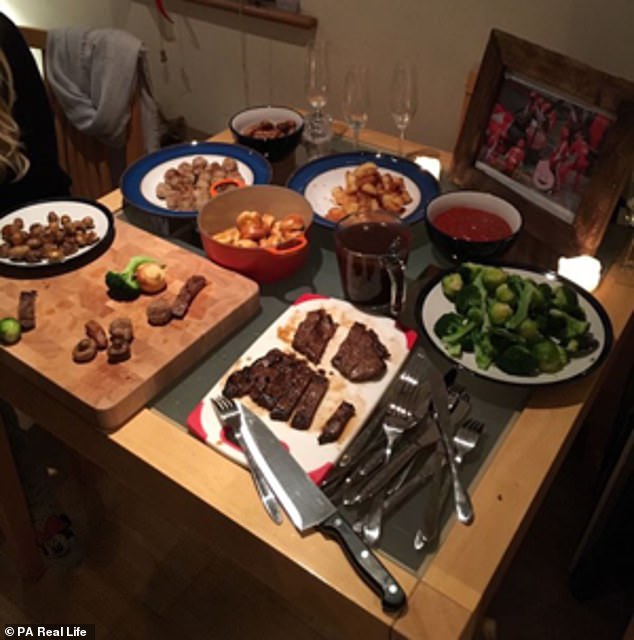 His family and friends organised a special surprise send-off for his testicle days before his operation that November. They laid out tables packed with spherical snacks, such meatballs and stuffing, along with a selection of nuts and meat and one veg (pictured)

‘It was such a great do and it made such a difference seeing everybody who’s important to me before the big op,’ Mr Robertson added.

‘I was the butt of one too many ball-related jokes, but it was ace all the same.’

Two days after the bash, Mr Robertson was admitted to St George’s Hospital in Tooting, south west London, to have the procedure, known as an orchidectomy.

Surgeons removed the testicle through an incision made in the groin. The operation was a success and Mr Robertson was discharged on the same day.

He went back for two bouts of chemotherapy and a course of radiotherapy to kill off any remaining cancer cells.

Six months later, in May 2017, Mr Robertson, speaking out as part of Macmillan’s ‘Let’s Talk About What You Can’t Say’ campaign, was given the all-clear.

Following the positive news, he underwent surgery to have a prosthetic testicle fitted, which he said brought him ‘closure’.

But, despite his good humour, Mr Robertson said his ordeal could have been avoided if he had confronted his fears earlier. 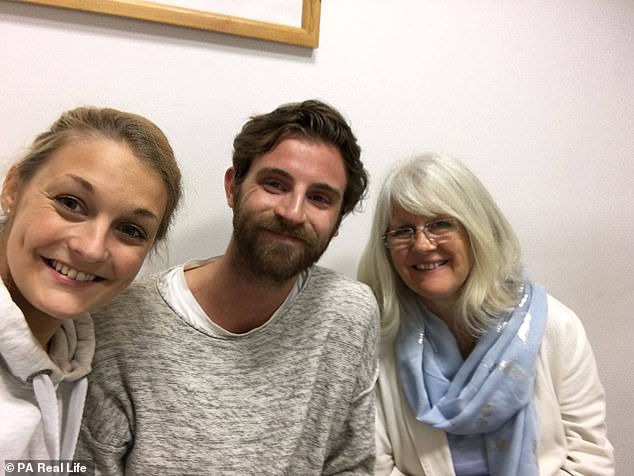 ‘As fun as my “ball-voyage” party was, you don’t want to have one thrown in your name – believe me,’ he said.

‘I wish I’d seen the doctor as soon as I noticed something was amiss, instead of waiting as long as I did.’

He recalled noticing his testicle becoming enlarged, but kept finding excuses to put off going to a doctor.

He said: ‘One morning I noticed that my left testicle felt slightly larger than before, it seemed irregular but there was no lump and I decided to see how it felt after a week.’

But, caught up with his busy life in London, weeks turned to months.

‘Looking back, it’s clear that I could have made the time to see someone sooner if I’d wanted to – but I didn’t,’ he said.

‘I was forever making excuses to myself. Either I had too much work on, or I didn’t want to eat into my social life, but deep down I know I was scared and embarrassed.’ 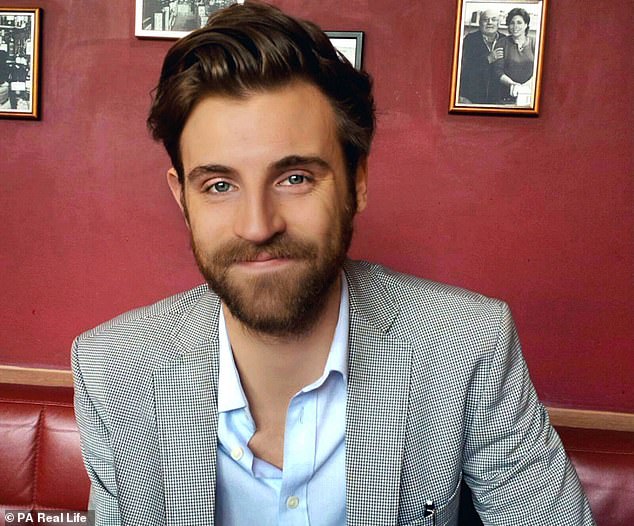 After his op, Mr Robertson went back for two bouts of chemotherapy and a course of radiotherapy to kill off any remaining cancer cells. Six months later, in May 2017, he was given the all-clear

He said his friends broke down into tears when he told them he’d been diagnosed with cancer.

‘Shane, my housemate, broke down… He knew lads who were just 16 when they were diagnosed with testicular cancer, which really grounded me, as at least I have broad shoulders to deal with the burden.’

Mr Robertson’s sister Penny, 30, a civil servant, kept the family strong. ‘Straight off the bat she was positive about the whole thing,’ he said.

‘She used to work for the department of health and insisted that this was something we were going to beat.’

HOW TO CHECK FOR TESTICULAR CANCER

Testicular cancer is still quite rare, with just over 1,600 new cases a year in the UK.

However, it is one of the most curable cancers with 90 per cent making a complete recovery.

The cause is unknown but doctors do know that men who were born with an undescended or partly descended testicle are five times more likely to develop testicular cancer.

Other research has suggested that there may be a hereditary factor involved, and that if you have a father or brother who has developed the disease you are at an increased risk.

A brother with testicular cancer means that you could be 10 times more likely to develop it.

The first sign is usually a swelling of one of the testicles, or a pea-sized hard lump on the front or side of a testicle.

Other signs to look out for are a sudden collection of fluid in the scrotum, an enlargement or tenderness of the breasts and occasionally there may be a dull ache, or even more seldom, acute pain in the abdomen or groin.

From the time of puberty onwards your man should do a simple quick check regularly.

A good place to do this is in, or immediately after a bath or a shower, when the muscle in the scrotal sac is more relaxed.

He may ask you to help. Hold the scrotum in the palm of your hands, so that you can use the fingers and thumb on both hands to examine the testicles.

Note the size and weight of the testicles. It is common to have one slightly larger, or which hangs lower than the other, but any noticeable increase in size or weight may mean something is wrong.

You should feel a soft tube at the top and back of the testicle. This is the epididymis, which carries and stores sperm.

It may feel slightly tender. Don’t confuse it with an abnormal lump. You should be able to feel the firm, smooth tube of the spermatic cord, which runs up from the epididymis.

Feel the testicle itself. It should be smooth with no lumps or swellings. It is unusual to develop cancer in both testicles at the same time, so if you are wondering whether a testicle is feeling normal or not, you can compare it with the other.

Treatment for testicular cancer should not normally affect your sex life.

The occasional patient may have problems with infertility before diagnosis of testicular cancer.

For those who are fertile there is little risk of their fertility being damaged irreversibly by the treatment.

A period of 12 – 24 months of diminished fertility after treatment is usual, however.

It is rare to have the disease in both testicles, and if one testicle has to be removed, the remaining testicle tends to make enough sperm to compensate for the loss.

Several hundred children have been fathered over the last decade by parents treated for testicular cancer and there is no evidence of any genetic problems to children from the treatment.