Boys who are exposed to pollution in the womb and childhood may have poorer thinking skills and working memory, scientists claim.

They found boys exposed to greater levels of the tiny pollutant emitted by diesel fumes performed worse on memory tests.

However, the findings did not apply to girls. The Spanish researchers believe this may be because they have different hormones and genetics. 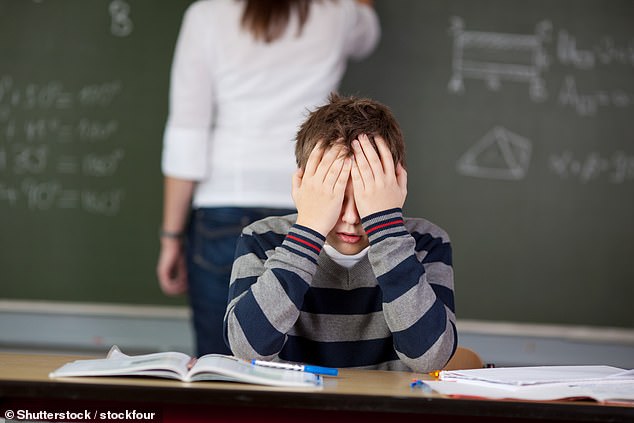 Boys who are exposed to pollution in the womb and childhood may have poorer thinking skills, scientists in Barcelona have said following a study

Both boys and girls exposed to pollution in the womb and throughout childhood were also less able to stay focused on a computerised task.

Poor working memory skills can have an impact on children’s learning as it is required in the classroom for concentration, as well as in every day life.

The findings add to the growing evidence that shows air pollution is threatening children’s brains and cognitive function.

Researchers at the Barcelona Institute for Global Health (ISGlobal) used data from 2,221 children aged between seven and ten.

The children’s cognitive abilities were assessed using various tests on the computer, found the study published in Environmental Health Perspectives.

Their exposure to air pollution at home during pregnancy and throughout childhood was estimated with a model using real measurements.

The study found greater PM2.5 exposure from pregnancy until age seven years was associated with lower working memory scores on tests in boys.

The results suggest exposure to fine particulate matter throughout the study period had a cumulative effect, meaning they got worse over time.

Working memory is a system inside the brain responsible for temporarily holding information, similar to short term memory.

It has a limited capacity, and the information is being processed while used – when writing a phone number down, for example.

It plays a fundamental role in learning, reasoning, problem-solving and language comprehension.

Executive attention is one of the three networks that make up a person’s attention capacity and is involved in high-level forms of attention.

It’s involved with noticing and solving conflicts, error detection and the regulation of thoughts and feelings.

Dr Ioar Rivas, lead researcher, said: ‘As yet, we don’t understand what causes these differences [between boys and girls].

‘But there are various hormonal and genetic mechanisms that could lead to girls having a better response to inflammatory processes triggered by fine particulate matter and being less susceptible to the toxicity of these particles.’

But this study assessed exposure over a much longer time – from the pregnancy to seven years of age – as opposed to just one year in previous work.

He said: ‘This study reinforces our previous findings and confirms that exposure to air pollution at the beginning of life and throughout childhood is a threat to neurodevelopment and an obstacle that prevents children from reaching their full potential.’

A growing body of research suggests that exposure to air pollution in the earliest stages of life is associated with negative effects on cognitive abilities.

Fine-air particles, which weigh less than 0.0025mg and have about three per cent the diameter of a human hair, are given out in vehicle-exhaust fumes.

They enter circulation when they are breathed in and deposited in the lungs.

WHAT EVIDENCE IS THERE THAT POLLUTION AFFECTS CHILDREN’S BRAINS?

Pollution is damaging to children’s lung function, even at lower levels of exposures, as well as contributing to a multitude of health conditions mostly involving cardiovascular and pulmonary disease.

Researchers have long noted higher rates of mental illness and learning and developmental delays among children growing up near congested freeways:

Children who breathe in toxic air may be at a higher risk of growing up with autism spectrum disorder (ASD), research in Environment International suggests.

Researchers discovered youngsters living in highly polluted parts of Shanghai have a 86 per cent greater chance of developing ASD.

The scientists, based at Monash University in Australia, said children are most at risk in their first three years of life.

Teenagers who live in a polluted cities face a higher risk of developing psychosis, according to research published in JAMA Psychiatry.

Air pollution from cars’ exhaust fumes may be altering the structure of children’s brains to make them more anxious, research by the University of Cincinnati revealed.

The study used neuroimaging and discovered those exposed to pollution had higher volumes of a metabolite that has been linked to Alzheimer’s disease and brain disease.

And the same children had higher rates of short term anxiety, giving the scientists a clue to one way that pollution might affect the brain to increase risks of mental illness.

Youngsters whose expectant mothers lived in homes with fine-air particle pollution have thinner outer layers of their brains, which is associated with ADHD.

The researchers, from Erasmus University in Rotterdam, analysed pregnant women whose children were followed from their pregnancies to between six and 10 years old.

Brain health was investigated using scans taken when the youngsters were between six and 10 years old.