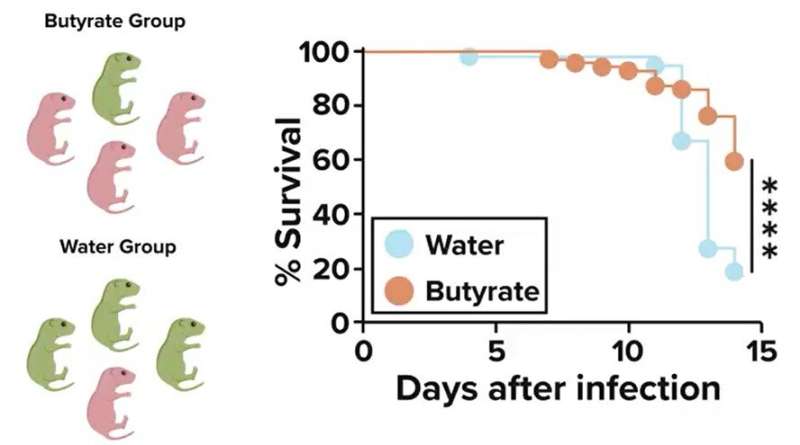 Biliary atresia is a rare disease that occurs when a delicate tree-like set of ducts that carry bile from the liver to the intestine becomes scarred and blocked. While some treatments can slow the damage, most children who develop biliary atresia will die without a liver transplant.

However, when pregnant mice were fed butyrate—a food supplement derived from intestinal bacteria—most of their pups survived after exposure to infection that induces fatal biliary atresia. Co-authors of the new study, published Jan. 10, 2022, in Nature Communications, say this occurred because the mothers receiving the enhanced diet transferred a healthier mix of gut bacteria to their newborns, which in turn helped them resist the disease.

“Other studies have shown that the maternal transfer of the microbiome to the baby may change susceptibility of later-onset conditions such as allergies, obesity, even heart disease. Our study shows that this transfer also has implications for diseases that begin during the neonatal period, like biliary atresia,” says Jorge Bezerra, MD, Director, Division of Gastroenterology, Hepatology and Nutrition at Cincinnati Children’s and senior author of the new study.

The difference in survival rates was striking. When newborn mice were exposed to a virus that is known to cause biliary atresia, about 60% of those born to mothers given butyrate survived, compared to only 20% of the mice born to mothers receiving typical food and water. Then, after further testing revealed which compound produced by the healthier mix of gut bacteria offered the strongest protection, the team improved the survival rate to as high as 83%.

That key compound turned out to be glutamine—also widely available as a food supplement. However, the team directly injected pups with glutamine after they were born rather than feeding glutamine to their mothers.

These different results from different approaches indicate that much more research is necessary before making any recommendations to human mothers about what they might do to reduce the risk of their children developing biliary atresia, Bezerra says.

What are butyrate and glutamine?

Butyrate is a short chain fatty acid that is metabolized by humans but depends upon our gut bacteria to produce. We get butyrate when the bacteria in our guts breaks down otherwise non-digestible plant fibers.

Like the mice in the study, human babies with biliary atresia often have very low amounts of butyrate in their systems, which makes the beneficial effects observed from the butyrate heavy diet worth further investigation, the researchers say. No human clinical trials of the butyrate diet have been attempted for preventing biliary atresia.

In a typical human diet, glutamine is a useful protein that comes primarily from consuming meat and dairy products, along with some high-protein plant foods. Specifically, glutamine directly supports the health of bile duct tissues, the research team reports.

It was somewhat surprising that the rough equivalent of a high-fiber plant diet would reveal the importance of a largely animal-based food product.

“We think that the intestinal production of butyrate in neonates also enriched the population of bacteria that makes glutamine inside the intestinal lumen,” Bezerra says. “Both molecules are important, with glutamine serving as a survival factor for bile duct cells while butyrate may suppress an unwanted harmful immune response. It appears that both work together to decrease the risk of biliary injury.

A complex study to analyze a complex relationship

The study published in Nature Communications involved building upon years of past research and using several new and established technologies to tease out how a rare disease can be affected by the interplay between our immune systems and the bacteria living in our guts.

In addition to Bezerra, the work involved four co-leading authors and 19 other scientists from Cincinnati Children’s, the University of Cincinnati, and several institutions in China.

The team was inspired by a previous study that reported that mice with high levels of the bacterium Anaerococcus lactolyticus appeared to be resistant to biliary atresia. That bacteria is one of several species known for producing butyrate.

The new paper used flow cytometry to dig into understanding which types of cells within liver tissue were being affected by butyrate, noting that the substance sharply reduced the inflammatory immune system response after pups were infected with the disease-triggering virus.

The team also used DNA sequencing to analyze the population of gut bacteria, which demonstrated a common molecular signature between maternal and newborn microbiomes after the mothers were fed with butyrate.

Later, the team used mass spectrometry to quantify several substances generated by the bacteria that might be responsible for the beneficial effect. This work boiled down the list to two substances in the gut that were sharply increased by the butyrate-heavy diet: Hypoxanthine and glutamate.

The team evaluated both substances by injecting their biological cousins—inosine and glutamine—into pups induced to develop biliary atresia. Glutamine showed a powerful benefit, with 83% of pups resisting biliary atresia, while inosine showed no benefit.

While the butyrate diet appeared to limit a tissue-damaging immune system over-reaction to the infection, the glutamine specifically supported the health of the cells in the bile duct epithelium.

What does this mean for infants with biliary atresia?

Currently, there is no cure for biliary atresia other than liver transplantation. If performed early enough, a surgical Kasai procedure can extend survival by restoring some of the bile flow from scar-clogged biliary trees. But this procedure is not a cure.

If these mouse-based findings successfully translate to human disease, this discovery could transform care for many children with biliary atresia in the years ahead. But many questions remain to be answered.

It is not possible yet to predict which newborns will develop biliary atresia, which it turn makes it difficult to know which pregnant women should consider a yet-to-be-developed supplement. While some cases of biliary atresia are caused by viral infections, the specific cause of disease for many children is not known.

A safe dose of butyrate that also would be strong enough to prevent biliary atresia is not known at this time; likewise for glutamine.

Much about the timing of any potential treatment also remains to be studied. For example, even if glutamine treatment protects bile ducts from being damaged by the disease, it is not clear whether glutamine can help repair damage and/or help re-open already clogged bile ducts.