Bereaved skin cancer patients are more likely to die because they don’t have a loved one to check their skin for dangerous moles, scientists claim

Bereaved skin cancer patients are more likely to die from melanoma – the deadliest form of the disease, a study has claimed.

British and Danish experts found melanoma patients had a 17 per cent higher risk of dying if their partner had died.

The researchers, who tracked 5.5million people for 20 years, also claim widows and widowers are less likely to get diagnosed with the disease.

This is because they don’t have a loved one to check for dangerous moles, meaning their cancer isn’t spotted until it is too late.

When melanoma reaches later stages, it is generally more aggressive and harder to treat.

Each year, 197,000 people are diagnosed with melanoma globally. It is the fifth most common cancer in the UK and kills nearly 2,300 people each year. 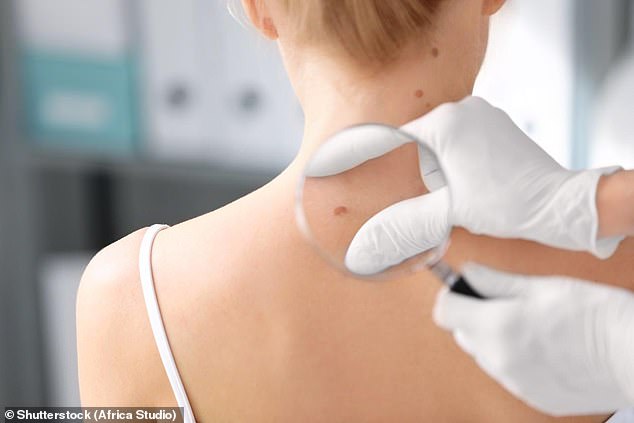 Losing a partner can raise the risk of dying from the deadliest form of skin cancer by almost a third, according to new research

The study published in the British Journal of Dermatology was based on almost 5.5million people in the UK and Denmark who were tracked for up to 20 years.

The first study part, from the London School of Hygiene and Tropical Medicine and Aarhus University Hospital, in Denmark, investigated links between partner bereavement and the risk of diagnosing melanoma.

Those who had lost a partner were 12 per cent less likely to be diagnosed with melanoma compared with non-bereaved persons.

WHAT IS MELANOMA AND HOW CAN YOU PREVENT IT?

Melanoma is the most dangerous form of skin cancer. It happens after the DNA in skin cells is damaged (typically due to harmful UV rays) and then not repaired so it triggers mutations that can form malignant tumors.

The American Cancer Society estimates that more than 91,000 people will be diagnosed with melanoma in the US in 2018 and more than 9,000 are expected to die from it.

Around 15,900 new cases occur every year in the UK, with 2,285 Britons dying from the disease in 2016, according to Cancer Research UK statistics.

People who develop melanoma are usually treated by having the growth removed and potentially with traditional cancer treatments such as chemotherapy, depending on how bad their illness is.

In the second study part, the researchers compared the risk of mortality among people with melanoma who bereaved with those non-bereaved regardless of when their partner died.

Melanoma patients who experienced bereavement had a 17 per cent higher risk of dying from their melanoma compared with those who were not bereaved.

The effects were more significant in the first year after losing a partner, with bereaved being 31 per cent more likely to die compared to non-bereaved.

Senior author Dr Sinead Langan, of the London School of Hygiene and Tropical Medicine, said: ‘The study findings are interesting and may relate to bereaved people no longer having someone to help with skin examinations, leading to delays in diagnosis.’

‘Our work suggests that melanoma may take longer to detect in bereaved people, potentially because partners play an important role in spotting early signs of skin cancer.’

Dr Langan said: ‘We observed an increase in melanoma-specific mortality associated with partner bereavement, which peaked during the first year following melanoma diagnosis.’

The researchers said they could not rule out the reason behind worse death rates in bereaved people is due to stress accelerating the disease, and not through lack of checking skin.

Psychological pressure has been proposed as a risk factor for melanoma, but clinical evidence is limited.

A previous study from the two universities suggested that psychological factors, such as stress, are widely believed to play an important role in the onset of skin diseases, including psoriasis, eczema, vitiligo and melanoma among others.

It has been suggested stress hormones can accelerate growth and migration of tumour cells, worsening prognosis, as immunological surveillance is important in melanoma outcomes.

An Israeli study from 2000 found similar results. Published in the American Journal of Public Health, findings from the group suggested that stress had an effect on the malignancy and prompted an ‘accelerated demise’ in adults following the death of an adult son in the Yom Kippur War in the early 70s.

They followed their cohort for 20 years and found that the risk of death was increased by bereavement if the cancer had been diagnosed before the loss, but not after.

Limitations of the recent study include lack of data on some risk factors of melanoma, such as sun exposure or family history. The researchers considered that this had limited impact on the conclusions drawn from this study.