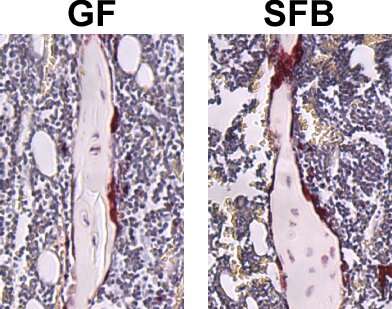 Microbes are often seen as pathogens that cause disease, but the picture is actually more complex than that limited view. The gut microbiome, which is the collection of microorganisms that colonize the healthy gut, is considered a supporting organ that can regulate host biological functions, including skeletal health. Researchers at the Medical University of South Carolina (MUSC) who study osteoimmunology, the interface of the skeletal and immune systems, have examined the impact of a specific microorganism, segmented filamentous bacteria (SFB), on post-pubertal skeletal development. Their results, published online on Jan. 10 in the Journal of Bone and Mineral Research Plus, showed that SFB elevated the response of specific immune cells in the gut and liver. This response led to increased osteoclast activity and decreased osteoblast activity, cumulatively impairing bone mass accrual.

“This is the first known report to show that within the complex gut microbiome, specific microbes have the capacity to effect normal skeletal growth and maturation,” said Chad M. Novince, D.D.S., Ph.D., an assistant professor in the colleges of Medicine and Dental Medicine, who studies the impact of the microbiome on osteoimmunology and skeletal development.

The Novince lab focuses on the post-pubertal phase of skeletal development, the critical window of plasticity that supports the accrual of approximately 40% of a person’s peak bone mass. Recent work from the lab showed that the gut microbiome heightens immune responses in the liver and bone environment, which impairs skeletal bone mass. SFB has been shown by other groups to activate the immune response of TH17 cells in an interleukin-17A (IL-17A) dependent manner. The research aimed to link these aspects of SFB-mediated immunity determine if specific gut microbes have the ability to affect skeletal health.

To study the effects of SFB and the gut microbiome on skeletal health, the Novince lab utilized a mouse model with a defined microbiota. This research was facilitated by MUSC’s Gnotobiotic Animal Core, which is directed by Caroline Westwater, Ph.D., co-author and professor in the College of Dental Medicine. Available through the unique animal core, germ-free mice (no microbiota) and gnotobiotic mice (defined microbiota) provide an excellent model for studying the contributions of the microbiome to skeletal development.

To begin its studies, the Novince lab compared germ-free mice to SFB-monoassociated mice. Mice that had SFB exhibited a 20% reduction in trabecular bone volume—the type of bone that undergoes high rates of bone metabolism. Further examination of these mice showed that SFB colonization led to increased IL-17A levels in the gut and circulation, and enhanced osteoclast potential.

The presence of SFB within a complex microbiota led to reduced trabecular bone volume, which was attributed to increased osteoclast activity and decreased osteoblast activity. SFB colonization led to a proinflammatory immune state in the gut, with increased numbers of myeloid-derived suppressor cells (MDSCs) and M1-macrophages in the lymph nodes associated with the gut. Moreover, SFB colonization increased IL-17A levels in the gut and circulation.

Interestingly, the SFB presence in a complex gut microbiota also profoundly stimulated hepatic immunity. SFB colonization upregulated proinflammatory immune factors in the liver and increased TH17 cells in the liver draining lymph nodes. Furthermore, the presence of SFB led to higher levels of acute phase reactants—immune factors that are made in the liver and secreted into the circulation. Lipocalin-2 (LCN2) was particularly interesting because it is an antimicrobial peptide that influences bone metabolism.

SFB colonization resulted in increased circulating levels of IL-17A and LCN2, which are both factors that support osteoclast activity and suppress osteoblast activity. Taken together, these data show that SFB plays a critical role in regulating the immune response in both the gut and liver which has significant effects on the skeleton and provides strong support that gut microbiota actions on the skeleton are mediated in part through a Gut-Liver-Bone Axis.

Additionally, the contribution of SFB to skeletal health may have significant clinical implications.

“If we can prevent the colonization or deplete specific microbes such as SFB from the microbiome, there is a clinical potential to optimize bone mass accrual during post-pubertal skeletal development,” said Novince.

It is known that diet, probiotics and antibiotics have significant effects on the make-up of the microbiome, including SFB colonization. A majority of a person’s bone mass accrues during adolescence, or postpubescently. As people age, they slowly begin to lose bone mass, which puts them at risk for fractures and osteoporosis. Modulation of SFB, through non-invasive interventions such as diets or probiotics, could allow for the build-up or optimization of peak bone mass accrual during adolescence. This would limit the risk for aging associated low bone mass and related fractures.