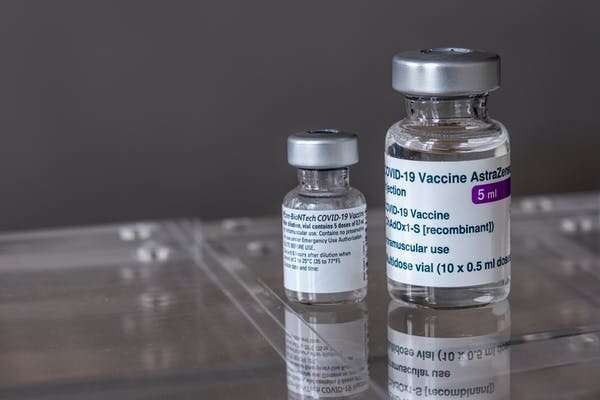 The B16172 variant is now dominant in the UK, and there have been fears that its sudden rise could derail Britain’s exit from lockdown. Scientists—including me—have predicted previously that B16172 and other closely related variants could, because of the mutations they carry, be resistant to vaccines.

Public Health England (PHE) has therefore investigated the effectiveness of the leading vaccines against B16172. It has released a preprint—an early piece of work yet to be reviewed by other scientists—which suggests that the UK’s vaccines are still effective against B16172, just not as effective as they are against B117, the variant that was previously dominant in the UK.

Does this mean we need not be worried? Unfortunately, probably not. Although PHE’s general conclusion looks correct, when looking closely at its findings there are a number of things that suggest B16172 could nevertheless cause a spike in cases in Britain.

Firstly, dosing makes a big difference here. After two doses, PHE did indeed find that the Pfizer vaccine was highly effective against B117 (93%) and only somewhat less effective (88%) against B16172. The equivalent estimates for the AstraZeneca vaccine were 66% and 60%.

However, the overall number of COVID-19 cases in people who had received two doses of either vaccine was low, which makes these estimates somewhat uncertain. Because these results weren’t calculated using lots of data, we need to be cautious about giving these results too much credence.

These estimates are quite worrying, considering the UK’s strategy is still to leave 12 weeks between the first and second doses. As B16172 becomes more prevalent, it may mean that we’re leaving millions of people with only 34% protection for a number of months. Increasing the gap between first and second doses (allowing more people to get first doses in the meantime) has been credited with preventing between 26 and 47 deaths per 100, 000 population in the UK—but these results may mean that having an extended gap is no longer the optimal strategy.

That said, this preprint only measured symptomatic illness and couldn’t estimate the effectiveness of the vaccines at preventing severe disease caused by B16172. As COVID-19 vaccines generally appear rather more effective at preventing severe disease than mild or asymptomatic infections, continuing with the 12-week gap and getting first doses to a larger number of people could still be optimal for reducing hospitalisations and deaths. Whether this is in fact the case should become clearer in time.

Perhaps more concerning was the finding that after two doses the AstraZeneca vaccine was much less effective than the Pfizer vaccine against both B117 and B16172. PHE has suggested this may be because of second doses of the AstraZeneca vaccine being rolled out later, meaning that this assessment was made before they had reached their full effectiveness.

But this isn’t yet proven, and this difference between the vaccines is a big gap to make up. In my view, given this difference it’s too early to claim—as PHE has—that both vaccines are highly effective against the B16172 variant.

The debate about vaccine effectiveness also shouldn’t happen in isolation from discussions about how infectious the new variant is. There’s reasonable evidence that B16172 is more infectious than earlier variants—perhaps 50% more so.

A modest reduction in vaccine effectiveness can alone be enough to tip the balance in favor of a increased transmission; when combined with an increase in infectiousness, then transmission can rise significantly.

The power of this combination is clear to see from the rapid increase in cases of B16172 in recent weeks. Case numbers have doubled every seven to ten days at a time when we were still in a fairly strict lockdown. For several weeks this increase was hidden by the dramatic decline in B117 cases at the same time. But now that B16172 has overtaken B117 as the dominant strain, and after the relaxations of May 17, we can expect to see total numbers of cases to start to increase more rapidly.