Scientists have discovered dozens of genes that are ‘strongly’ linked to autism, in what could be a breakthrough.

Researchers hope the 70 newly-discovered genetic variants could pave the way for new tests and treatments for the condition.

In the largest study of its kind, US researchers looked at the DNA of 150,000 participants, 20,000 of whom had diagnosed autism.

They identified the biological changes in the brain that contribute to autism.

Autism and related conditions such as Asperger’s affect more than one in 100 British children and one in 70 American youngsters — ten times more than 30 years ago.

Despite the rise, the condition is still little understood and getting a diagnosis can be lengthy and stressful for patients and their families.

While drugs can be given to control symptoms such as aggression or hyperactivity, there is no cure. 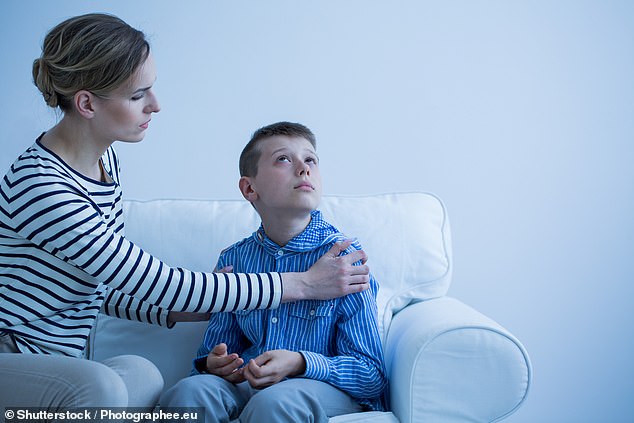 What are the signs of autism?

Signs of autism in young children include:

Signs of autism in older children include:

Common signs of autism in adults include:

The latest study,  published in Nature Genetics, pooled data from autism research initiatives, such as the Autism Sequencing Consortium, as well as the Massachusetts Institute of Technology and Harvard.

As well as the 70 genes that appear to be behind autism, they spotted a further 250 that are also associated with it.

Study co-author Dr Joseph Buxbaum, director of the Seaver Autism Center for Research and Treatment at Mount Sinai in New York, said: ‘We know that many genes, when mutated, contribute to autism.

‘In this unprecedented study, we were able to bring together multiple types of mutations in a wide array of samples to get a much richer sense of the genes and genetic architecture involved in autism.

‘This is significant in that we now have more insights as to the biology of the brain changes that underlie autism and more potential targets for treatment.’

He said a ‘precision medicine approach’ based will likely be needed for autism, that is based on a person’s genes.

And people should be genetically tested for autism to help develop new medicines that ‘benefit families and individuals at risk for autism spectrum disorder’, Dr Buxbaum said.

‘The more we can advance therapeutics, based on the targets identified in these genetic findings, the more people we have the potential to help, which could have a significant impact in addressing autism and developmental delay worldwide,’ he added.

The team then examined the activity levels of genes they uncovered, which are located in developing human neurons — the building blocks of the brain.

This showed that genes strongly linked with autism overlap with genes that increase the risk of schizophrenia.

Dr Buxbaum said: ‘These analyses indicate that there are shared genetic risk factors between autism and other neurological and psychiatric disorders.’

The researchers say their findings offer the ‘most comprehensive look yet’ at genetic variation among those with autism and other neurodevelopmental conditions.

They shed light on the ‘molecular roots’ of brain development and neurodiversity and provide new avenues for future research on the biology of autism, the team said.