Have you heard the one about the female politician who gets legless, goes to a strip club and turns in to a sexist, racist, groping disgrace? No? Well, how about the all-girl netball team getting blotto at the end of season drinks and urinating on each other and others? What about a high profile woman being photographed mock fellating a dog? No? Well, thankfully, me either. 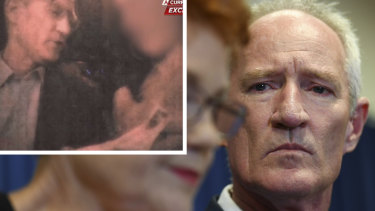 Steve Dickson resigned after he appeared on A Current Affair in a strip club.Credit:Nine

So why, I am asking myself yet again this week, do men? What’s more, once busted, why do they use alcohol as an excuse for their bad behaviour, arguing they are really great blokes until booze hits their bloodstream and they turn in to morons ready to unleash stupidity at best and violence at worst? How come, in so many criminal convictions, do men blame the grog for their transgressions? And just why do so many believe drunkenness is a get out of jail free card? It wasn’t me your honour, it was the beer!

Now, before I go on let me say that I am acutely aware that women, too, can exhibit horrendous behaviour when drunk. Oh, hell yes we can. As someone who once lived opposite a backpackers for years, I have heard the screeching, seen the fights and smelt the repercussions as I regularly hosed vomit and broken glass from my front garden. I have also been on a hen’s night where we visited a male strip club and, well, let’s just say it was an experience of women behaving badly I never wish to revisit or recall.

But it seems to me there is something going terribly wrong when blokes and booze unite that is different to the way we women tend to behave as a whole under the influence. And this week, we witnessed yet again just how nonsensical, inane and boorish this ugly union can be. I’m talking Steve Dickson here, whose lewd and lascivious behaviour captured on video at a US strip club last year saw the married 56-year-old comment, “I’ve done more Asian than I know what to do with”, continually grope a stripper’s breasts, and comment on another’s “wonderful set of cahoonas”.

After resigning from his party, One Nation, Dickson released a statement apologising for his behaviour and saying it was not a “true reflection” of him. “The footage shown does not reflect the person I am. It shows a person who was drunk and not in control of his actions and I take full responsibility for allowing that to happen.”

But why, I ask? Why did alcohol make him “not in control of his actions”, unaware of his standing in the community, his marriage vows or the fact he is a moral crusader?

It is the same question I’d like to ask the group of young men on holiday in Bali who felt the need to streak, urinate in public, insults locals and damage property while on a bus trip, all captured on video by the driver and released this week. I’m sure these young men present as normal when sober but add beer and their inner bozos burst forward.

Again, like Dickson, I’m sure these men would blame their behaviour on the booze, relinquishing responsibility for their actions in the process. But I am not copping this is an excuse, now or ever. Because I have seen it bandied about way too often in my career on police rounds and most disturbingly as a court reporter covering rape cases involving sportsmen.

In every instance, alcohol was used as an excuse. The man was so drunk he forgot he was married and took a woman or girl back to his room. He was so pissed he didn’t notice his mates enter the room. He was too out if it to stop them piling on the poor woman and taking turns with her sexually. Even worse, if the woman was drunk, she was accused of being complicit, somehow to blame for her alarming predicament. Yep, apparently, the booze made her want it.

While there are many psychological reasons cited for why men act the way they do under the influence – much of it seen as a lack of strong parents and male role models and discussed at length in author and psychologist Steve Biddulph’s excellent series of books on men and boys – there is no doubt it is a problem which much be addressed. Professor David Moore, from the National Drug Research Institute, wrote in 2016 that there is a need for future policy addressing alcohol and violence “to recognise that violence is gendered and most often perpetrated by men, especially young men".

“Informal discussions conducted in policy development meetings suggest that policy stakeholders see changes to masculine practices as unachievable or assume that masculinity is singular, fixed and inevitable,” he continued. “However, unless such issues are addressed, little lasting progress will be made in reducing alcohol-related violence.”

While the examples of this week’s male drunken behaviour may not have arguably resulted in violence, they do show that this belief that masculine behaviour is intractable – that boys will be boys – has some merit. And that is too depressing to contemplate.

So, it’s with great delight I can report some good news in his regard. Male attitudes and actions around alcohol are changing for the batter it seems– albeit slowly. Statistics reported by the Australian Institute of Health and Welfare show 22 per cent of Australians aged 14 and over reported being a victim of an alcohol-related incident in 2016, down from 29 in 2010. And 82 per cent of 12 to 17 year-olds reported abstaining from alcohol – a significant increase from 72 per cent in 2013. Also, it should be noted, 32 per cent of drug treatment episodes in 2015–16 were primarily for alcohol, making it the most commonly treated drug in Australia.

So, perhaps new generations of young men are finally realising that excessive alcohol is not their best self’s friend, nor is it an excuse for bad or illegal behaviour. Let’s just hope they are strong and brave enough to tap older men who should know better on the shoulder and remind them this is the case, too.

Wendy Squires is a regular columnist.