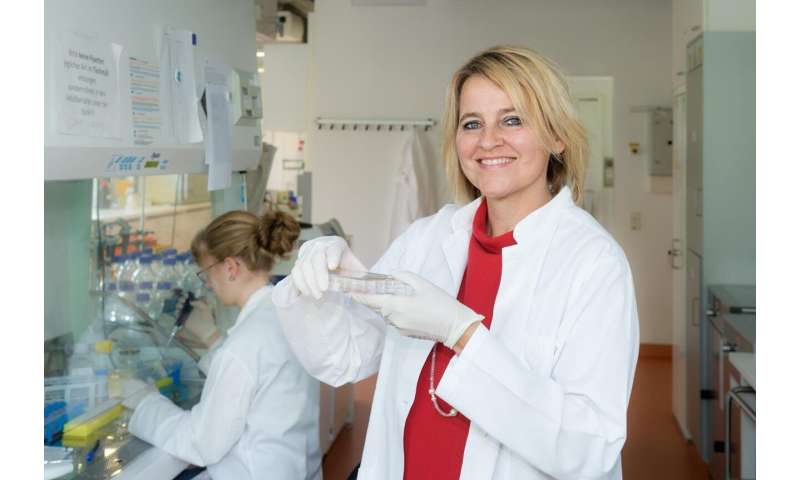 Why do we age? What exactly is happening in our bodies? And can we do anything about it? Mankind has sought answers to these questions since time immemorial. While the pharmaceutical scientists Alexandra K. Kiemer and Jessica Hoppstädter from Saarland University are not claiming to have solved this ancient problem, they have uncovered processes within our immune system that contribute to aging. Kiemer and Hoppstädter have shown that low levels of the hormone cortisol and the protein known as GILZ can trigger chronic inflammatory responses in the body. The results have been published in the journal Aging Cell.

The phenomenon of human aging is the result of a complex interaction between numerous factors, with our own immune system playing a critical role. As we get older, our body’s own defense mechanisms age, too. The adaptive or specific immune system that each of us acquires over the course of our lives and that protects us from the pathogens that we came into contact with gradually deteriorates as we age. In contrast, however, our innate or non-specific immune system, which is the first line of defense towards a wide variety of pathogens, becomes overactive. The result is chronic inflammation.

A persistent state of inflammation can cause serious damage to our bodies. One consequence is that chronic inflammatory diseases, such as atherosclerosis or arthritis, are far more prevalent in older patients. “This has been well-known for a long time. In fact, the scientific community refers to this phenomenon as ‘inflamm-aging’—a portmanteau word that combines the two inseparably linked processes of inflammation and aging,” explains Alexandra K. Kiemer, Professor of Pharmaceutical Biology at Saarland University.

What was uncertain up until now was what actually caused these inflammatory responses to flare up. Kiemer and her research group have now provided some important insight. According to research results from Jessica Hoppstädter, a lead researcher in Kiemer’s team, the inflammatory process is linked to the fact that the amount of cortisol generated in the body decreases as we get older.

Cortisol and its inactive form cortisone, commonly referred to as stress hormones, are released by the adrenal gland. The hormone cortisol acts as a biochemical signaling molecule and is involved in numerous metabolic processes in the body. Cortisol deficiency in the body leads to an inflammatory response. “The serum level of cortisol in the body is lower in the elderly. Moreover, macrophages, an important type of immune cells, can convert inactive cortisone to active cortisol, but this ability declines with increasing age. What we observe is what we could call ‘macroph-aging’—the age-induced disruption of macrophage functions,” says Dr. Hoppstädter.

Macrophages are important cells within the immune system that use signaling molecules to control other immune cells. They play a critical role in determining the extent of our body’s inflammatory response. However, macrophage function becomes impaired with increasing age. This can lead to an increase in the quantities of pro-inflammatory signaling molecules, which in turn drives the activity of other inflammatory cells of the body’s immune system.

The studies conducted by the pharmaceutical research team in Saarbrücken indicate that one particular protein is implicated in the malfunctioning of macrophages in the elderly. The protein is known as GILZ and its levels are regulated in part by cortisol. “The acronym GILZ stands for glucocorticoid-induced leucine zipper,” explains Professor Kiemer. Kiemer’s research group has been conducting experimental studies on the GILZ protein for many years and has discovered that it plays a critical role in many important processes in the human body. But GILZ can have a beneficial or a detrimental effect depending on the specific metabolic conditions.

“We know that GILZ plays a key role in our immune system, for example it’s involved in switching off the macrophage inflammatory response. So we put forward the hypothesis that loss of GILZ contributes to macrophage-mediated inflammation in older individuals,” explains Hoppstädter. Her data shows that a lower cortisol level causes macrophages to produce less GILZ, which in turn means that the macrophages simply continue to release inflammatory signaling molecules. The team found that GILZ levels are indeed lower in older subjects. To find out whether that in itself was enough to cause an inflammatory response, Hoppstädter genetically deactivated the GILZ protein. The data confirmed Hoppstädter’s conjecture: the macrophages were activated and there was a resulting increase in chronic inflammatory processes.

Professor Kiemer’s research group is involved in a number of studies examining the activity of the GILZ protein, including the search for new active compounds that are capable of boosting GILZ levels in the human body. However, a substance able to arrest the progress of age-related inflammatory processes or impede macrophage aging is still a long way off.