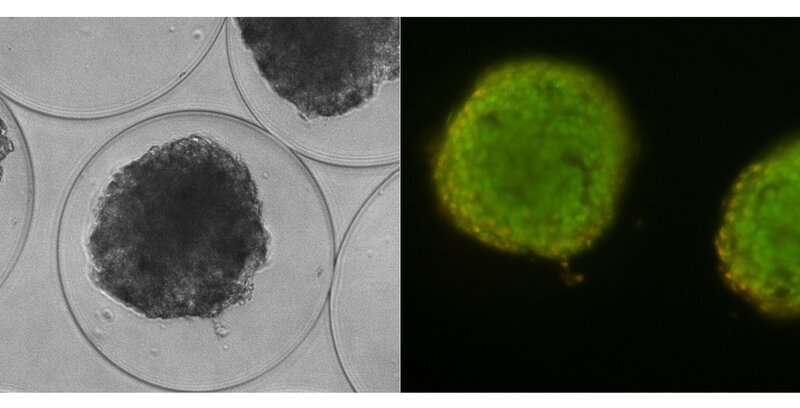 Type 1 diabetes mellitus (DMT1) contributes to 10 percent of the total of cases of diabetes mellitus worldwide, mainly in young people, and is regarded as a growing health risk. DMT1 is characterised by the self-immune destruction of the pancreatic cells that produce insulin (pancreatic islets), which leads to severe insulin deficiency and which is followed by the raising of blood glucose levels. Right now, the therapy based on insulin injections is the treatment applied in type 1 diabetic patients. As a result, in addition to the medical complications, this treatment requires multiple daily measurements of blood glucose and the lifelong sub-cutaneous administration of insulin.

Alternatively, says study author Albert Espona-Noguera, “the transplant of isolated pancreatic islets from donors provides a fresh source of insulin-producing cells capable of meeting insulin requirements in accordance with blood glucose levels in patients with DM1. One of the drawbacks of islet transplants is the long-term use of immunosuppressant drugs to prevent the immune rejection of the transplanted islets. These drugs lower the patient’s defences and entail serious medical complications. To avoid this problem, the pancreatic islets can be isolated from the patient’s immune system by means of microencapsulation techniques in which the islets are encapsulated in microcapsules made of biocompatible (non-toxic) materials. Among many materials used in cell microencapsulation, alginate is the most widely used one. This natural polymer has excellent properties for biomedical applications as it offers high compatibility and low toxicity.”

“However, the microencapsulation technique has various technical obstacles that are hampering its clinical application. A crucial problem is the high number of empty microcapsules generated during the process to microencapsulate the islets, which leads to a large increase in the volume of microcapsules to be implanted, and which in turn may increase the host’s immune reaction following implantation,” said Espona-Noguera.

The researchers sought to avoid the high number of empty microcapsules. “We have come up with an innovative approach for purifying the microencapsulated islets in order to reduce the implant volume by separating the microencapsulated islets from the empty microcapsules,” said Espona-Noguera. “We have developed a system to magnetically separate the microcapsules that combines magnetic nanoparticles and a microfluidic chip, in other words, a chip with channels of micrometric size produced by means of 3-D printing techniques, and which contains strategically placed magnets,” added said Espona-Noguera. “To separate the microcapsules, the pancreatic islets are put into contact with magnetic nanoparticles, thus providing them with magnetic properties.

“We are able to eliminate the empty capsules and, as a result, we reduce the volume of the therapeutic microcapsule implant. The great purification efficiency of this magnetic separation system has enabled us to lower the implant volume by nearly 80 percent, thus reducing the complications arising out of the implanting of large volumes of microcapsules and providing us with an alternative DMT1 treatment,” said Espona-Noguera.