Don’t let Banks Violet Bair’s age fool you. She may be silly, but Hilary Duff’s 4-year-old daughter is serious about music! Banks’ dad Matthew Koma recently shared the cutest video of her singing intently at a Harry Styles concert, and it’s giving major “So Yesterday” vibes!

Koma, who is a singer-songwriter and leads the Winnetka Bowling League band, shared a video of the preschooler on Instagram for her birthday today. In it, she looks effortlessly cool wearing a pink velvet dress and white pearls and sitting next to her mom. Banks gazes at Styles and sings every word to “Watermelon Sugar.” She’s not dancing or feeling bored or doing anything else a typical kid might do at a concert; instead, she is fully immersed in the music — and it’s the most adorable thing ever.

“Harry 4th Birthday Banks Bair,” Koma captioned it. “May you always sing with the most engaged and concerned look on your face.”

“Love you more than you’ll grow up to love Dawes,” he continued, making a cheeky reference to the band that Mandy Moore’s husband, Taylor Goldsmith fronts.

“Happy birthday to the next queen of pop in the making,” another wrote. 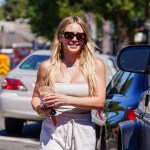 “Happy birthday, Banks with the cutest singing dimples !” someone said.

Banks looks just like her mama. And while she may be famous now for her hit series, How I Met Your Father and Younger, Duff was a singer once-upon-a-time too. Her debut Christmas album, Santa Claus Lane, just celebrated its 20th anniversary, as it dropped on Oct. 15, 2002. From there, she released Metamorphosis in 2003. She has released five studio albums in her career, including her latest, Breathe In. Breathe Out in 2015. Even Joe Jonas is a fan, as his DNCE band recently covered her hit “Come Clean.”

Of course, Banks still listens to this music now.

“I can’t get away from it, because someone exposed my 3-year-old to it,” Duff told Cosmopolitan. “We get in the car and I have to listen to my own music because my daughter’s screaming, ‘I want “parks,” I want “parks.”’ I’m rolling up to her preschool, and every time I turn it way down, she’s like, ‘Why do you turn it off? Why you turn it off?’ Like, girl. I’m not rolling up to your preschool blasting my own shit. So embarrassing.”

Banks also likes making music of her own. In Sept. 2019, Koma shared a video of the then-11-month-old Banks playing a mini pink piano along with her dad.

Now she knows all the words to Harry Styles and realizes how sacred one of his concerts is? (No wild fan-girling for this serious girl!) It won’t be long before we’re buying tickets to as Banks Bair show. Fingers crossed the future popstar brings back a song or two from her mama’s extensive collection at that time!

These famous moms love wearing matching outfits with their kiddos.