Epinephrine (ep-uh-nef-rin, -reen) is also known as adrenaline. It is a hormone that is secreted by the adrenal glands. (1, 3)

Adrenalin, without the e, was originally used as a trademark for a product made by an American pharmaceutical firm Parke, Davis & Co. The usage of the word, with and without the e, however, was not very consistent, thus many seem to use the terms interchangeably. (2)

Dopamine and norepinephrine are also referred to as catecholamines. They too are synthesized from tyrosine and contain the catechol moiety. (4) 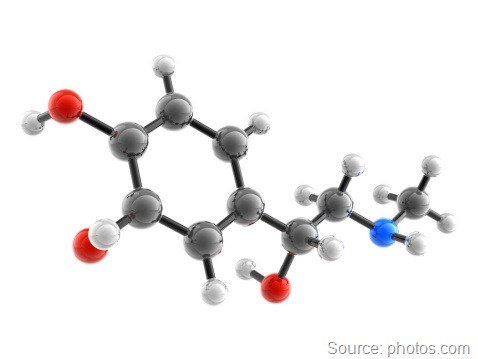 What role does epinephrine play in the body?

Epinephrine is involved in the fight or flight response in humans.

The fight or flight response occurs when a person is subject to a threat. This causes a signalling process to occur, which causes the body to react to the potential danger.

Specifically, once a threat is perceived, a signal is sent to the brain. The brain then sends nerve impulses to the adrenal gland in the kidneys.

Epinephrine then enters the bloodstream. It is thus carried around the body to cells in various locations, where it initiates several responses. (5)

Despite initiating several different responses, epinephrine’s effects have a collective purpose – to provide energy so that the major muscles of the body can respond to the perceived threat. (4)

One of the places where epinephrine has an effect is in the liver.

Epinephrine, along with another hormone called glucagon, is responsible for the breakdown of glycogen in liver cells. Glycogen is a form of energy storage in animals.

Epinephrine binds to a receptor on the outside of a liver cell causing a conformational change to occur.

This change means that a G protein can now bind. Consequently, adenylate cyclase and ATP can bind to the complex.

The second messenger then causes the activation of a protein kinase which activates phosphorylaze. Phosphorylaze is an enzyme which catalyzes the breakdown of glycogen to glucose. (3)

Epinephrine and the skin

Restriction of the arteries is caused by the binding of epinephrine to these alpha-adrenergic receptors. This cuts off blood supply to the skin. (4)

A signalling cascade is also stimulated. This results in the contraction of the smooth muscle cells in the skin, which cause the raising of the hairs on the surface of the skin. (5)

Epinephrine and the lungs

Specifically, epinephrine binds to beta-2-adrenergic receptors on bronchiole muscle cells. This allows the bronchioles to relax, which enables intensified respiration. (5)

Epinephrine and the heart

Epinephrine binds to beta-adrenergic receptors on heart muscle cells. This causes the contraction rate of the heart to increase. This ultimately leads to increased blood supply to the tissues in the body. (4)

Epinephrine is used in a medical context. One of the most widely known uses is in epinephrine injections to relieve the symptoms of allergic reactions. Epinephrine is also sometimes used in cardiopulmonary resuscitation (CPR).

Perhaps one of the most widely known uses of epinephrine is in injections for life-threatening allergic reactions. (7)

Such potentially life-threatening allergic reactions are referred to as anaphylaxis and can be caused by:

Common symptoms of anaphylaxis are:

Epinephrine injections work to counteract the symptoms of anaphylaxis by:

Epinephrine has a short half-life, however, so the relief from the symptoms is only temporary. Consequently the individual needs to be taken immediately to hospital. (3)

Epinephrine use in Cardiopulmonary Resuscitation (CPR)

Epinephrine is sometimes used in CPR as it is an adrenergic receptor stimulator. (12)

It stimulates both alpha and beta-adrenergic receptors which cause enhanced myocardial and cerebral blood flow.

This means that CPR is more effective as a central blood reserve is maintained due to increased peripheral resistance. (13)

There are potential side effects of using epinephrine, however, as it has been linked to brain and heart damage. (3)

Extensive epinephrine treatment induces proliferation of cardiac muscle cells. This is partly due to the activation of the Mitogen-activated protein (MAP) kinase cascade. This can lead to cardiac hypertrophy. (4)

Cardiac hypertrophy results in the size of the chambers of the heart being decreased – in particular the left and right ventricles. (14)

April graduated with a first-class honours degree in Natural Sciences from Pembroke College, University of Cambridge. During her time as Editor-in-Chief, News-Medical (2012-2017), she kickstarted the content production process and helped to grow the website readership to over 60 million visitors per year. Through interviewing global thought leaders in medicine and life sciences, including Nobel laureates, April developed a passion for neuroscience and now works at the Sainsbury Wellcome Centre for Neural Circuits and Behaviour, located within UCL.

Founded in 2012, Peloton introduced a revolutionary spin on the spin class. Participants could work…