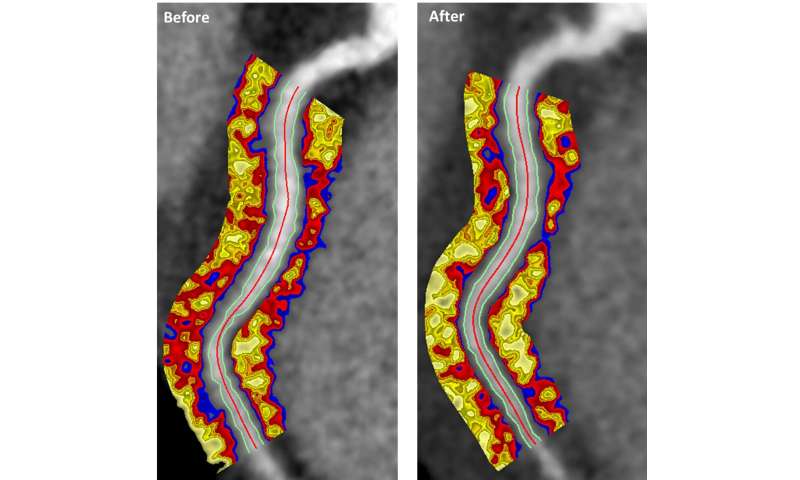 Researchers have found that anti-inflammatory biologic therapies used to treat moderate to severe psoriasis can significantly reduce coronary inflammation in patients with the chronic skin condition. Scientists said the findings are particularly notable because of the use of a novel imaging biomarker, the perivascular fat attenuation index (FAI), that was able to measure the effect of the therapy in reducing the inflammation.

The study published online in JAMA Cardiology, has implications not just for people with psoriasis, but for those with other chronic inflammatory diseases, such as lupus and rheumatoid arthritis. These conditions are known to increase the risk for heart attacks and strokes. The study was funded by the National Heart, Lung, and Blood Institute (NHLBI), part of the National Institutes of Health.

“Coronary inflammation offers important clues about the risk of developing heart artery disease,” said study’s senior author Nehal N. Mehta, M.D., a cardiologist and head of the Lab of Inflammation and Cardiometabolic Diseases at NHLBI. “Our findings add to the growing body of research that shows treating underlying inflammatory conditions may reduce the risk of cardiovascular diseases.”

The researchers analyzed 134 patients who suffered moderate to severe psoriasis and had not received biologic treatment for at least three months before starting on the study’s therapy. Fifty-two of these patients who chose not to receive the biologic therapy, were treated with topical or light therapies only and served as the control group. The participants are from an ongoing, prospective cohort study, the Psoriasis Atherosclerosis Cardiometabolic Initiative cohort at NIH.

Coronary artery inflammation particularly affects perivascular fat—the fat tissue surrounding arteries—by changing its composition, making it attenuated, or less fatty, as captured by the perivascular fat attenuation index (FAI), which researchers in the current study used to measure the effects of the biologics on coronary inflammation.

“FAI is a new method of analyzing CT scans that can predict a patient’s risk of fatal heart attacks and other cardiac events years in advance, and independent of other traditional risk factors for heart disease,” explained study co-author Charalambos Antoniades, M.D., professor of cardiovascular medicine at Oxford University. “In fact, our research has found that an abnormal perivascular FAI was linked to a six- to nine-fold increased risk of major adverse cardiovascular events.”

“After seeing the predicting value of the perivascular FAI for cardiac events, a key lingering question was if we could modify it using anti-inflammatory interventions. As far as we know, our study is the first to assess potential effects of biologic therapy on coronary inflammation using the measure,” said Mehta.

The researchers believe that the strength of the perivascular FAI in predicting the risk of future cardiac events could guide therapeutic decisions for individual patients, promoting a more personalized medicine approach to care.

Psoriasis, a common skin disease affecting 3% to 5% of the U.S. population, is associated with heightened systemic inflammation, which elevates risk of blood vessel disease and diabetes. Inflammation occurs when the body’s defensive mechanism kicks in to ward off infection or disease, but this mechanism can turn against itself when triggered, for instance, by excess low-density lipoproteins (LDLs) that seep into the lining of the arteries.

High cholesterol can be reversible – with the help of a good diet. One breakfast…

Bradley Walsh, 60, has said he was warned by doctors he would die if he…