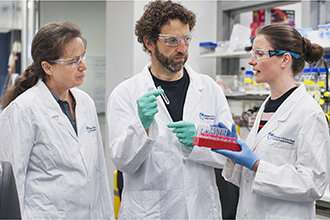 Institute scientists have revealed that a gene called PHF6 plays a powerful role in protecting against blood cancer. The study showed how a breakdown in the gene’s function could accelerate the development of T cell acute lymphoblastic leukaemia (T-ALL).

Understanding how potential ‘tumour suppressor genes’ work is important for T-ALL because new prevention and treatment strategies are urgently needed. Half of all adult patients with this cancer do not survive beyond five years.

“We discovered how PHF6 was important for limiting cell division. This is significant because the overproduction of cells is a hallmark of cancer. Our study showed that without the tumour suppressing function of PHF6, the early stages of normal blood development were disrupted which could potentially explain how PHF6 mutations lead to leukaemia,” Dr. McRae said.

The study found PHF6 was also important for regulating the expression of other genes, Dr. McRae said. “A loss of PHF6 conspires with other genetic mutations found in blood cancer patients. We saw this to be the case with a gene called TLX3, that is overexpressed in leukaemia cells,” she said.

Associate Professor Thomas said that in order to improve early diagnosis and treatment of cancers, researchers needed to forensically investigate genetic mutations to better understand their impact because not all mutations played a role in driving or maintaining disease.

“Large-scale sequencing efforts have pinpointed more than 100 genes frequently mutated in T-ALL. For this information to be useful for improving diagnosis and treatment, investigating the contribution of these genes to disease development and progression is essential,” he said.

Dr. McRae said PHF6 was well worth exploring because previous studies had shown PHF6 was the fifth most common mutation in T cell leukaemias.

“It is our job as cancer researchers to determine which mutated gene ‘suspects’ are actually ‘culprits’ for driving disease so that we can carry this important information forward in our mission to combat disease. This is why it is so exciting to have identified PHF6’s tumour suppressor function and establish that loss of PHF6 function drives and maintains leukaemia,” she said.

Mutations in PHF6 generally occur during a patient’s lifetime due to environmental factors and errors in the DNA repair process. In some rare cases, people are born with these mutations, which result in the Borjeson-Forssman-Lehmann intellectual disability syndrome (BFLS). It is important to note that a subset of BFLS patients develop leukaemia early in life.