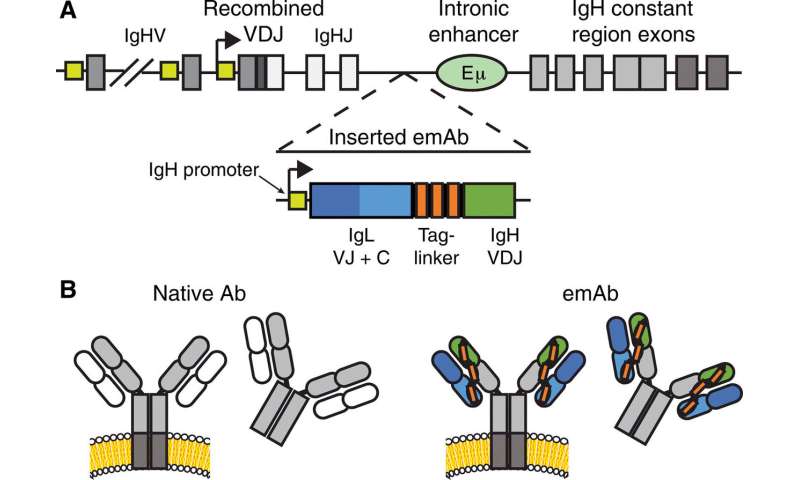 Antibodies are currently in use to treat diseases that range from cancer to autoimmunity and are usually administered to patients in multiple doses, much like medical drugs. However, the production and storage of antibodies are comparatively more expensive, with considerable interest on finding alternative strategies to deliver them.

In a recent study, Howell F. Moffett and an interdisciplinary research team in the departments of Global Health, Immunology, Vaccine and Infectious Disease in the U.S. engineered both human and murine (mouse) B cells in the lab. They engineered the cells to express antibodies that targeted a number of viruses including the respiratory syncytial virus (RSV). The scientists showed that a single injection of B cell expressing RSV-specific antibodies into mice lacking T and B cells to be protective. This new technology, now published in Science Immunology, will open the possibility of using engineered B cells as therapeutics in healthcare.

Effective vaccines are not currently available for lifelong protection against many common infections such as RSV, HIV, influenza virus and Epstein-Barr virus (EBV), despite decades of research. In the present work, Moffett et al. introduced an alternative to a protective vaccine by developing a genetic strategy using CRISPR-Cas9 (clustered regularly interspaced short palindromic repeats and Cas9 protein), using the technique to replace endogenously encoded antibodies of primary human B cells with antibodies that target RSV, HIV, influenza or EBV instead.

They observed the efficient expression of the engineered antibodies in primary B cells under the control of endogenous regulatory elements to indicate intracellular compatibility. The cells also maintained normal antibody expression and secretion. Using the engineered mouse B cells, they showed how a single transfer of B cells engineered to express an antibody against the respiratory disease RSV resulted in potent and durable protection in RAG1 deficient mice. The present approach offers the opportunity to achieve sterilizing immunity against pathogens where traditional vaccines have thus far failed to induce or maintain protective antibody responses.

Protective vaccines have reduced human mortality from several infectious diseases by activating the humoral immune response for the subsequent production of high-affinity, pathogen-specific antibodies that produce B cells. Nevertheless, research efforts are still underway to offer protection against pathogens that cause a variety of common diseases, including the RSV, a common pathogen infecting the upper and lower respiratory tracts. The virus has a life-threatening impact on infants, the elderly, those with cardiopulmonary disease and those undergoing hematopoietic stem cell transplants. 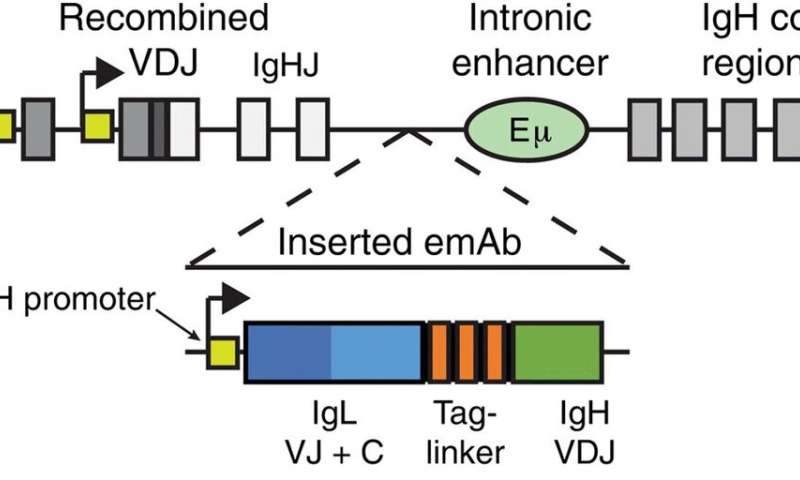 Although several variants of RSV vaccine candidates were developed in 1966 and 2016, they were not able to elicit a prolonged protective response. Scientists are also currently developing monoclonal antibodies to similarly protect against HIV, influenza virus, Epstein-Barr virus (HBV), human metapneumovirus virus (HMPV), dengue, Zika virus, Ebola virus and many other high-risk pathogens. Protective vaccines typically elicit both long-lived B cells and antibody-secreting plasma cells, where memory B cells express a membrane-bound form of antibody. These allow cells to rapidly respond and differentiate into additional antibody-secreting cells during infection.

Moffett et al. developed a genetic engineering strategy to mimic the effective B cell response, which allowed the expression of protective antibodies against RSV, HIV, influenza or EBV in mouse or human B cells in the presence of endogenous regulatory elements. The fully functional B cells typically require alternative splicing and polyadenylation to produce membrane-bound and secreted antibodies; a challenging process to recapitulate in a viral transgene. Adding another layer of complexity, antibodies are typically produced with two genes; the heavy chain gene (IgH; Immunoglobin heavy chain locus) and either the kappa (Igk) or the lambda (Igλ) light chain gene. Targeting the IgH locus is a complicated task due to its large size and extreme genetic heterogeneity within antibody expressing B cells.

The IgH locus includes segments of V (variable), D (diversity), J (joining) and C (constant) that undergo recombination events at the level of the DNA during B cell development in each cell. Previous research attempts had either replaced the heavy region or light region of the IgH locus to genetically engineer B cells. In the present work, Moffett et al. combined the two previous techniques by developing a single-cut approach to insert a genetic construct in an intronic region (noncoding region of an RNA transcript) of the IgH locus. Using this approach, they efficiently engineered both murine and human cells.

To achieve one-hit insertion, the scientists designed an engineered monoclonal antibody (emAb) cassette containing an IgH promoter. In the following step, Moffett et al. genetically engineered the constructs to allow emAbs to be expressed within membrane-bound regions, under the control of endogenous regulatory elements. 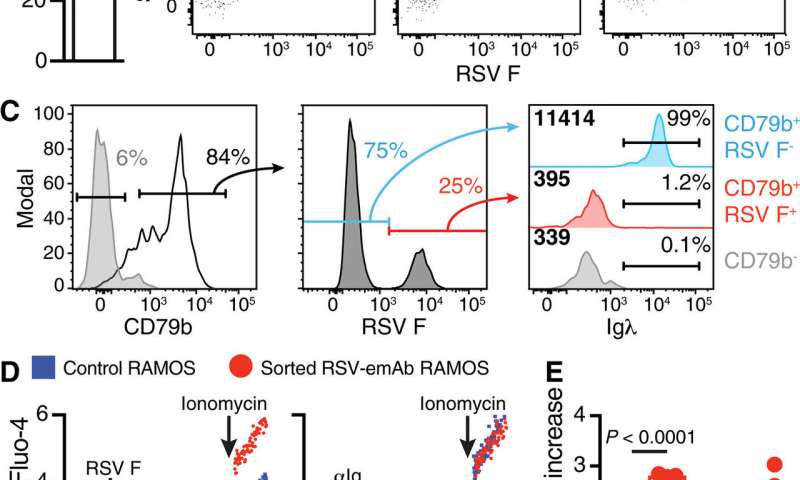 To test the insertion and expression of emAb (engineered monoclonal antibody) cassettes, the scientists investigated them in a Burkitt-lymphoma derived B cell line that natively expressed membrane-bound antibodies. They analyzed the genome using the CrispRGold algorithm to identify several potential Cas9 guide RNA binding sites to implement the intended genetic engineering. The scientists first electroporated the cell line precomplexed with the Cas9 protein to achieve efficient DNA cutting. Then they incubated the cells with adeno-associated virus (AAV), which encoded an engineered RSV-emAb cassette derived from Palivizumab (a monoclonal antibody engineered for respiratory syncytial virus).

The scientists designed the experiments to only allow cells to bind the respiratory syncytial virus (RSV) antigen, if the RSV-emAb cassette could be successfully inserted into the IgH locus. Using flow cytometry, they then assessed RSV-emAb expression in the cell surface and the results showed that emAb engineering reprogramed the B cells with a functional monoclonal antibody.

In the next step, Moffett et al. engineered human primary B cells with cell expansion and differentiation, before electroporation with gRNA/Cas9. To test the performance of the emAb backbone across multiple, independently derived antibodies, the scientists designed three additional emAb cassettes encoding the listed antibodies, alongside mock engineered control B cells.

The scientists showed the flexible nature of the emAb platform to engineer B cells to produce and secrete protective monoclonal antibodies. Followed by experimental setup optimization to express both IgH loci via gene engineering. 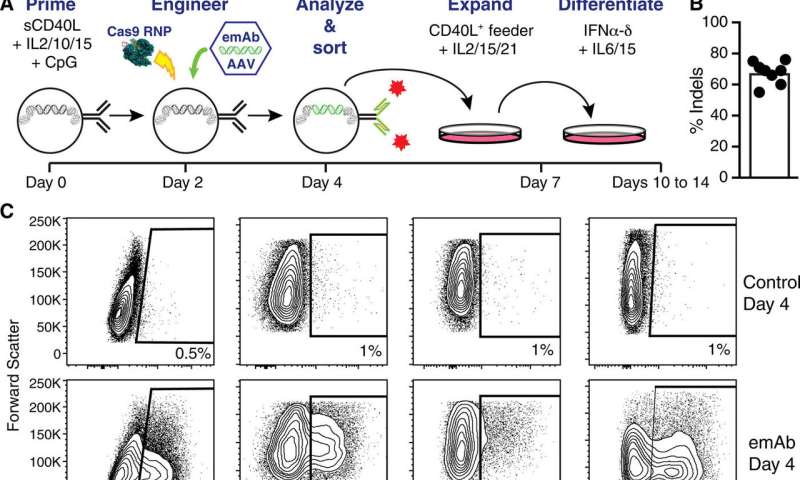 After completing the experiments to engineer primary B cells in vitro, the scientists next tested their protective capacity in vivo in a mouse model of infection. Moffett et al. were able to maintain serum antibody levels for 40 days, after transferring the gene engineered emAb B cells into the immunocompromised RAG1-/- mutant mouse model lacking endogenous T and B cells. The engineered cells protected the mice for 82 days due to the persistence of emAb cells. However, the cells did not respond to infection, which the scientists credited to the absence of T cells in the RAG-/- mutant mice.

Since the B cells were engineered and cultured in-lab, they may not have acquired the property of memory B cell formation to respond independently of the help of T cells and prevent infection in the animal model. In the future, therefore, Moffett et al. intend to pre-select B cell subsets with reduced dependence on T cells to improve the cell response to infection. 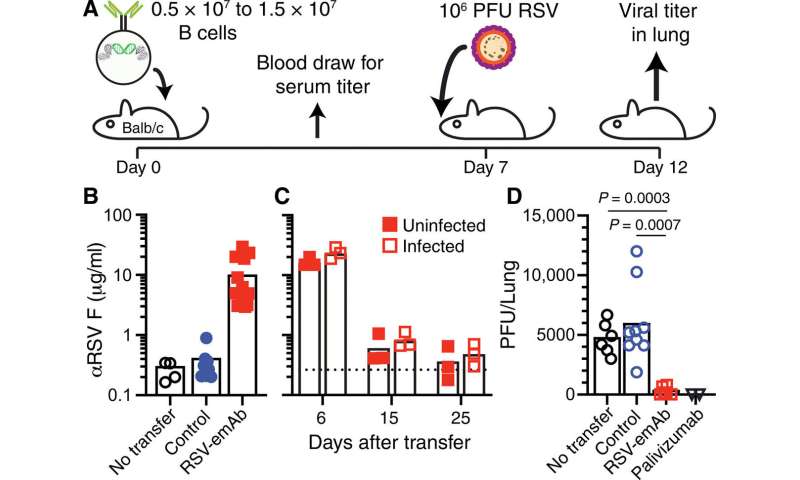