Celery juice has been seemingly everywhere: The murky green potion looks like water from an algae-filled pond, yet its disciples have been downing it by the glassful. Yes, that staid crunchy workhorse usually smeared with peanut butter has gone to the top of the vegetable cart.

Stories posted to Instagram and elsewhere are anecdotal but claim that the juice is a remedy for digestive issues, auto-immune disorders, psoriasis, acne, chronic fatigue syndrome, acid reflux, the shingles virus, strep bacteria and weight loss. Many of the stories credit Anthony William, a self-professed originator of the celery juice craze. 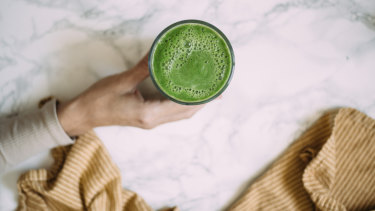 Juicing retains the taste and concentrates the nutrients, but many preparations reduce the fibre, which nutritionists say is the best part.Credit:iStock

"There's no scientific evidence to support any of the claims being made," said Rachel Scherr, an assistant research scientist in nutrition at the University of California, Davis. There aren't large studies in humans on the topic, and the little research that exists on the vegetable has been cellular or animal.

Nutritionists say other factors could be influencing juicers' sense of well-being: better hydration from celery's water content (celery juice is literally a tall drink of water, 94% so); or a placebo effect.

Should you still drink it if there is no evidence?

"Overall, it's a healthy juice," said Dr. Elizabeth Bradley, medical director of Cleveland Clinic's Center for Functional Medicine. Celery juice has more potassium and vitamin K than tomato juice and carrot juice. However, it is lower in important nutrients like vitamin A, which is abundant in carrot juice. Unlike other vegetables that may lose polyphenols and antioxidants from the pulp or skin when juiced, Bradley said, it is unclear how much loss occurs when juicing whole celery stalks. Nevertheless, nutritionists recommend consuming a variety of vegetables and their juices because they all have their own combination of phytochemicals, antioxidants, vitamins and minerals.

The salty flavour in one cup of celery juice comes from the 215 milligrams of sodium, an essential electrolyte that helps our bodies maintain a balance of fluids. The recommended dietary allowance is less than 2,300 milligrams daily, but most Americans exceed that. It is a habit that can increase blood pressure, a risk factor for heart disease and stroke.

Juicing retains the taste and concentrates the nutrients, but many preparations reduce the fibre, which nutritionists say is the best part. The juice contains 3.78 grams per cup, still far below the 25 to 30 grams recommended daily, primarily from food. Fibre helps people feel full and maintain regularity.

Like kale and spinach, celery contains antioxidants and may have anti-inflammatory properties. Compared to the stalks, the leaves are more than 20 times higher in flavones, a class of flavonoids and compounds found in plants with antioxidant properties, according to a 2017 review in Advances in Nutrition. Food is complex, and just because a food is high in flavones doesn't translate into guaranteed health benefits. Compounds like flavones are modified after they are absorbed, and these modified forms might not have the same effect as what is demonstrated in preclinical studies, according to the review.

For those who were consuming few vegetables and are now drinking celery juice, nutritionists say that's a good change.

Why is celery juice suddenly everywhere?

Many credit William, who wrote a book called, "Celery Juice: The Most Powerful Medicine of Our Time Healing Millions Worldwide." He shares advice with his large fan base through his podcast, his website, his New York Times best-selling books and in his contributions to Gwyneth Paltrow's site Goop.

William, who also uses the moniker "Medical Medium," is neither a medical doctor nor formally trained in nutrition, and his process is unconventional. "Spirit starts to speak to me and I write every word exactly the way spirit wants it until I have a stack of notepads many feet high," he said, adding, "It's a gift that was given to me."

His claims are as large as the fields of celery in California, the country's biggest producer. Nutritionists call his assertions unfounded. "Any reputable scientist would say there's nothing here," said David Levitsky, a professor of nutrition and psychology at Cornell University. "And I guarantee you next year there will be some other juice or food or magical mushroom that will come out and offer these same properties."

However, across the country, according to an analysis from the U.S. Department of Agriculture's Economic Research Service, cartons of celery were fetching $15.05 earlier this month, a 42.8% increase from the same time the year before, although far below the high of $73.66 in April.

How was celery used before?

Celery is from the plant Apium graveolens and is a relative of carrots, parsley and cilantro. Before being cast to the bottom of the crisper, it had quite the illustrious history. Charles Davis, a plant evolutionary biologist at Harvard University, said that the Egyptians placed wild celery in King Tutankhamen's tomb in 1325 B.C. and that the first cultivated medicinal use of celery dates to 400 B.C. by the Romans.

Greeks drank a wine from it, and winning athletes wore crowns of the foliage in Pan-Hellenic games. The seeds and fruit have long been used medicinally. "I find it intriguing that the purported medical usage of the plant is being revived today but is instead extracted from the vegetative parts," Davis said in an email interview.

Will celery juice hurt you?

"There's nothing in it that's going to hurt you," Levitsky said. Celery can have a slight diuretic effect, which may increase urination and reduce some bloat.

Nutritionists say patients should not discontinue seeing their doctor or treatment in favour of a celery juice regimen.

But there is something larger at stake, Levitsky said. Believing in miraculous remedies can leave patients vulnerable to just about anything, even harmful treatments. "It thwarts belief in science and medicine to some magical mystery cure, and there ain't no such thing," he said.

Is celery juice a scam?

"It's definitely not a 'miracle juice,'" said Rebecca Scritchfield, dietitian and author of Body Kindness. "It can join the list of the snake oil remedies."

William, for his part, contends he is not misleading anyone; he neither owns a celery farm nor sells the juice himself. "I'm not saying it's a cure-all," he said.

Nutritionists say to drink celery juice if it is enjoyable, but don't take stock in all the claims.