Teenager caught a mind-altering infection from his cat, started believing he was the ‘son of the devil’ and having suicidal thoughts

A teenager was left suicidal after he caught a mind-altering infection from his cat who scratched him.

The boy, whose name has not been revealed, was hospitalised four times during 18 months, believing he was an ‘evil, damned son of the devil’.

Doctors diagnosed the otherwise healthy 14-year-old – who had been having suicidal thoughts and feared his cat was going to kill him – with rapid onset schizophrenia.

His illness progressed, leaving him with hallucinations, irrational fears and outbursts of rage, until his mother had to quit her job to care for him.

During an 11-week stay in hospital, extensive testing was carried out on the boy, who was failing to respond to usual treatments.

A physician recognised marks on his skin linked with ‘cat-scratch disease’, caused by a bacteria called Bartonella henselae found in the mouth and claws of cats. 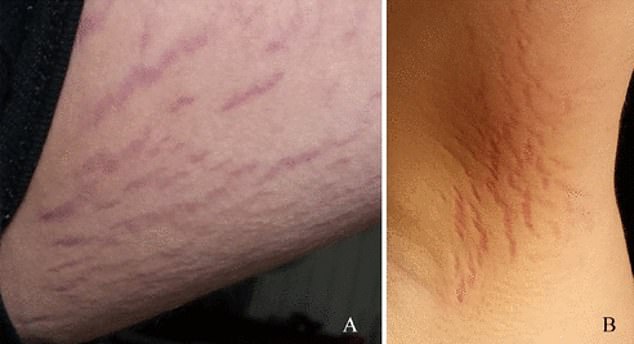 A teenager who spent almost two years in psychosis was suspected to have schizophrenia, but was in fact had an infection of Bartonella from cat scratches. Photographs taken by the parents in February 2017, around seven months after the parents spotted them

The patient tested positive for the infection, and after a range of antibiotics, he made a full recovery, doctors at North Carolina State University revealed.

Bartonella infection is notorious for ‘hiding’ in the linings of blood vessels, but left untreated, it can have devastating consequences.

It has caused a range of illnesses, ranging from a fever to fatigue, and in extreme cases can lead to deadly brain swelling and heart infections.

Researchers, writing in the Journal of Central Nervous Disease, said this rare case was interesting for a number or reasons.

Dr Ed Breitschwerdt, lead author of the case report, said: ‘This case is interesting for a number of reasons.

‘Beyond suggesting that infection itself could contribute to… schizophrenia, it raises the question of how often infection may be involved with psychiatric disorders generally.’

The talented boy, who owned many pets, was suddenly struck in October 2015 by symptoms including feeling overwhelmed, confused, depressed, and agitated.

He also expressed that he wanted to take his own life due to intrusive thoughts about killing his family.

He was admitted for emergency psychiatric hospitalisation and discharged a week later.

But soon he became more dysfunctional and was unable to go to school due to his severe psychiatric symptoms.

The report said: ‘In addition to persecutory delusions related to his pets, he developed auditory, visual, and tactile hallucinations and began refusing to leave the house.’

By December 2015, his mother quit her job to provide full-time supervision, but he was soon in a psychiatric hospital again.

WHAT SHOULD YOU DO IF YOU’RE BITTEN BY AN ANIMAL?

Clean the wound immediately by running warm tap water over it for a couple of minutes, even if the skin does not appear broken.

Remove any dirt or foreign objects from the wound.

Encourage the wound to bleed slightly by gentle squeezing (unless already bleeding freely).

If there is heavy bleeding, place a clean pad or sterile dressing over wound and apply pressure.

Dry the wound and cover with a clean dressing or plaster.

Seek medical advice unless the wound is very minor.

For severe wounds, go to A&E.

The medial team were mystified when a long list of treatments for the psychosis and other possible causes of the symptoms such as an auto-immune condition were ineffective.

The withdrawal symptoms of the drugs were traumatic, too – the boy experienced severe anorexia, nausea, and vomiting, which resulted in hospitalisation and a 20.5kg (40lbs) weight loss over almost six weeks.

In the summer of 2016, he was hospitalized for 11 weeks at a large out-of-state psychiatric teaching hospital where extensive testing took place.

When he came home, still unwell, his parents noted the marks on his skin around the armpit and thigh – around ten months after the initial symptoms begun.

In early 2017 a physician connected the dots, and blood tests revealed that there was, in fact, an infection of cat-borne bacteria.

By the end of the year, after missing two years of school, the boy had returned to his normal self.

Bartonella was until recently thought to be a short-lived infection.

But watchdogs have warned that cat bites and scratches can be ‘devastating in terms of infection and permanent disability’, if left untreated.

There are at least 30 different known species of Bartonella, and 13 of those have been found to infect human beings.

Official figures suggest around 12,000 Americans succumb to cat scratch disease each year. It is unsure how many Britons develop the infection.

A 23-year-old man was left unable to get an erection after he was scratched by a cat, a bizarre case study revealed last September.

The unidentified patient, from Belgium, was injured by the claws of a feline in his own home – but it is unknown how.

As well as the inability to make love, he endured pain in his testicles, a fever and intense sweating at night before visiting hospital.

Doctors discovered he had ‘cat-scratch disease’ after various tests. It is caused by bacteria called Bartonella henselae found in the mouth and claws of cats.

It causes fever, fatigue, headaches, and swollen lymph nodes. In extreme cases it can even cause deadly brain swelling and heart infections.

A course of antibiotics cleared up the infection and the man’s erection returned.

The infection’s link to erectile dysfunction has been relatively scarce until the new case, revealed by doctors in BMJ Case Reports.

They were unable to state how the bug caused his loss in erection ability, however, pointed to previous cases that triggered facial paralysis.

They said this same biological mechanism could have triggered his erectile dysfunction and testicular pain.