Student, 22, undergoes a life-saving heart transplant after doctors ‘dismissed her symptoms of a killer condition as exam stress’

A student whose extreme tiredness and difficulty walking were put down to exam stress discovered she actually needed a heart transplant because of a life-threatening condition.

Charlotte Carney, 22, was reportedly told by doctors she was sleeping 20 hours a day and feeling breathless because she was stressed.

But last year – five years after she started suffering – she was diagnosed with deadly restrictive cardiomyopathy, in which the heart doesn’t properly fill with blood.

She was given just a 20 per cent chance of surviving the next two years without a heart transplant, which she received in spring last year.

After six days in a coma and four weeks in hospital following the operation, Miss Carney is now well enough to finish her degree and is urging people to be organ donors. 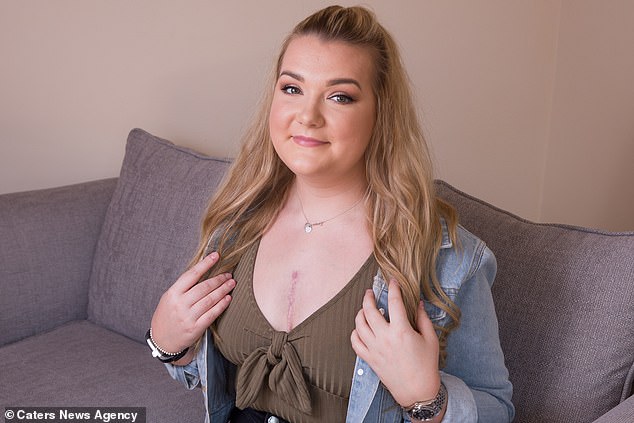 Charlotte Carney, from Northwich in Cheshire, had a heart transplant aged just 22 last year, after what she thought was laziness turned out to be a serious illness

She claims GPs suggested her symptoms were linked to stress but her health continued to decline and left her sleeping for 20 hours per day and struggling to walk.

‘I was dismissed by doctors due to my age in 2013 and I was told my symptoms were due to exam stress,’ she said.

‘But as the years passed my health continued to decline, I struggled to stay awake for longer than a few hours.

‘I thought I was just really lazy and loved sleep but after tests on my heart I was finally diagnosed.’

Tests last February revealed she had restrictive cardiomyopathy, which occurs in less than one in a million people.

The condition prevents the heart from relaxing properly and means it does not fill with blood, reducing how much oxygen can get to the muscles.

It is unknown what causes restrictive cardiomyopathy and it can develop at any age, but isn’t curable. 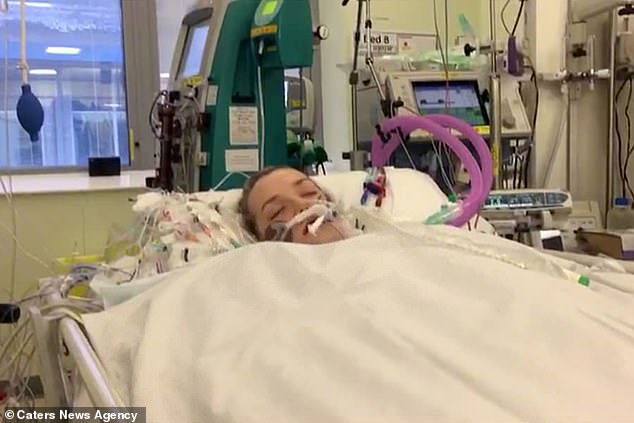 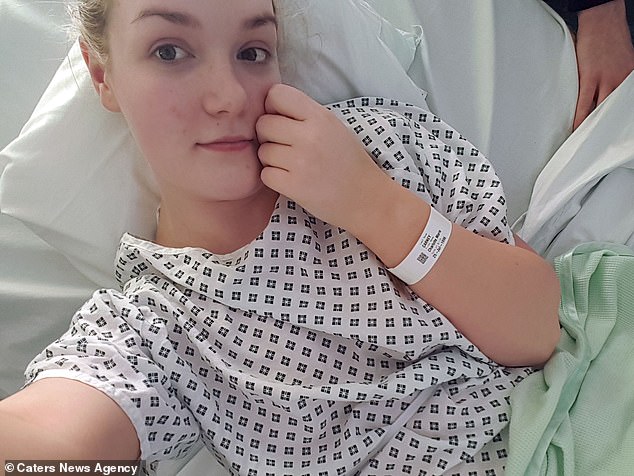 Miss Carney said doctors gave her a 20 per cent chance of surviving two years if she didn’t get a new heart, because her condition prevented her organ from filling with blood

WHAT IS RESTRICTIVE CARDIOMYOPATHY?

In patients with restrictive cardiomyopathy (RCM), the heart’s muscle cells are replaced with scar tissue.

This causes the muscle walls of the ventricles (the lower chambers of the heart) to stiffen, which makes it harder for the heart to beat.

In particular, the stiffened muscles cannot relax properly, which means the ventricles can’t fill with blood. This lowers blood flow around the body.

Some people with RCM have no, or very mild, symptoms. But over time, the restricted function of the heart can lead to heart failure, symptoms for which include tiredness, shortness of breath and palpitations.

RCM is relatively rare compared to other types of cardiomyopathy. It is most often diagnosed in children at 5–6 years of age, although it can develop at any age.

Although RCM cannot be cured, treatment aims to reduce and control symptoms, particularly those of heart failure. In some cases where the heart function is very poor, people may require a heart transplant.

It can be genetic and run in families. It can also develop following some treatments for cancer, such as radiation therapy.

Miss Carney tried medication but it didn’t help, so she was put on the heart transplant waiting list three months after her diagnosis.

‘I knew my time was running out,’ she said. ‘And if I didn’t have a new organ quickly I was risking being too unwell for the transplant.

‘I couldn’t believe it when three weeks later I got the call. The nurse started asking about the weather at first and then she said “I think you know why I’m calling”.

‘It was surreal and although I was nervous I knew I had no other choice if I wanted to survive.

‘I was so thankful when I woke up but I thought about the donors family straight away.’

Miss Carney spent just four weeks in hospital before she was allowed home and noticed a difference in her appearance straight away after the transplant.

She has been thriving since returning home and will now be able to complete her degree in forensic psychology.

She said: ‘For the first time in my life I had warm feet – they had always been cold before.

‘My family and friends said I looked really pink, too, as I’d always been so pale before the surgery.

‘I don’t need several naps every day now and finally have my independence back.

‘I have just started back for my final year at university to study forensic psychology and criminal justice.’

Miss Carney is now thanking the charity Cardiac Risk in the Young for saving her life after they referred her to a heart doctor after tests.

And she is sharing her story to raise awareness of the importance of organ donors.

‘I can’t thank the family of the heart donor enough and I do hope to one day meet them if they want to,’ she said. 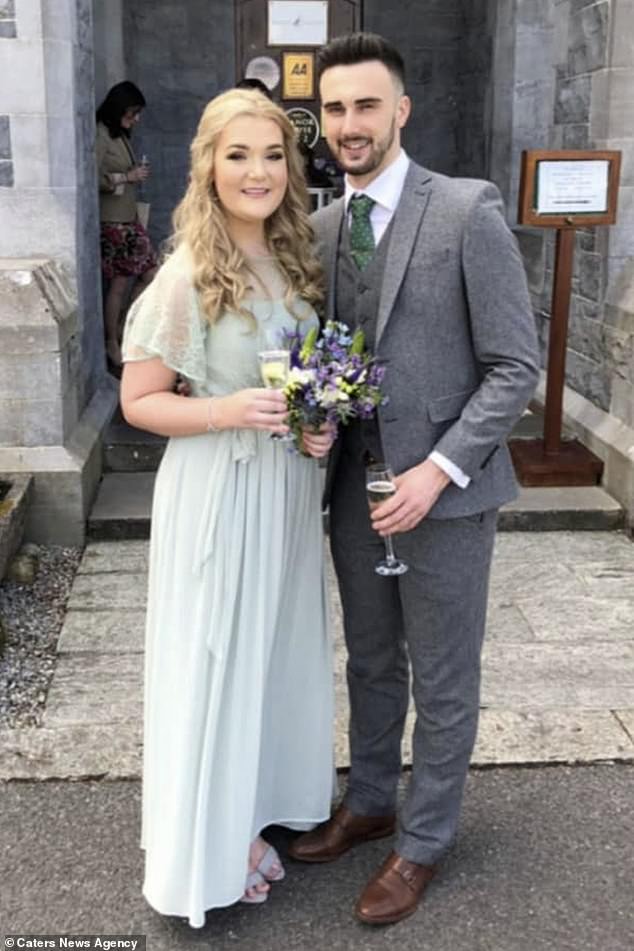 Miss Carney (pictured with her boyfriend, Ciaran Hughes) is back in good health after her operation and will return to university to finish her degree in forensic psychology 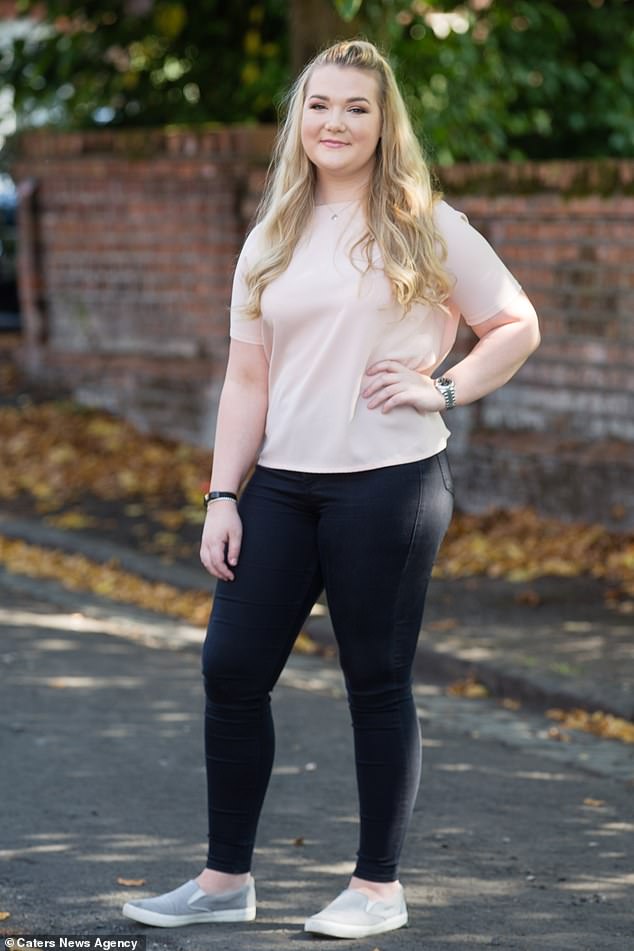 The 22-year-old, who began suffering with her symptoms more than five years ago, is now urging people to join the organ donor register to help the ‘endless’ list of people waiting for lifesaving operations. She said: ‘I’m very grateful I didn’t have to wait years for the call’ 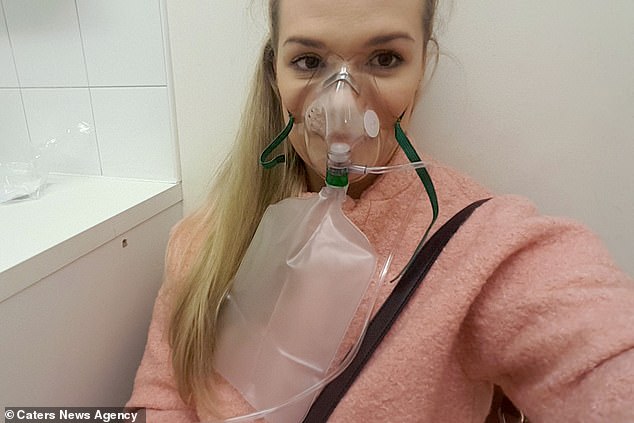 Miss Carney’s heart problem meant oxygen could not be pumped around her body fast enough so she often became breathless without exercising (pictured, wearing a mask to help her breathe)

‘My quality of life was so poor earlier this year that I don’t think I would have lasted another two years.

‘I would only be able to stay awake from 11am until 2pm and even walking a few steps would leave me breathless.

‘I think it’s so important for the law the change around organ donation so it’s an “opt out” system.

‘People need to talk to their families about this subject too so everyone knows what they want.’

‘The amount of people on the waiting list is endless, I’m just very grateful I was one of the lucky ones who didn’t have to wait years for their call.’

British Heart Foundation’s Philippa Hobson, a senior cardiac nurse, added: ‘Restrictive cardiomyopathy can reveal itself in a number of subtle ways, with symptoms including shortness of breath, swelling of the legs and feet, fatigue and nausea.

‘If you notice any new symptoms, particularly if they persist, speak to your GP.

‘Although restrictive cardiomyopathy is uncommon, heart conditions can affect anyone at any age and it’s essential that they’re diagnosed early.’