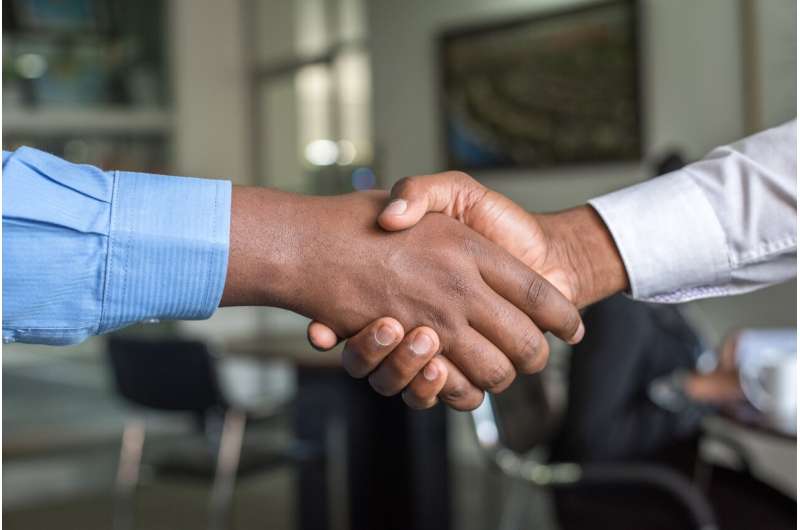 Researchers from the University’s School of Social Sciences found that extending handshakes beyond three seconds meant that people received less enjoyment from one-on-one encounters and even influenced how often they would laugh.

Dr. Emese Nagy, a Reader in Psychology who led the study, said that the findings highlight the importance of introducing ourselves appropriately.

“Handshakes are a particularly important greeting and can have long-lasting consequences for the relationships that we form,” she said.

“There has been evidence to suggest that many behaviors, such as hugs, fall within a window of approximately three seconds and this study has confirmed that handshakes that occur in this timeframe feel more natural to those who participate in the greeting.

“While shaking hands for longer may appear to be a warm gesture on the surface, we found that they negatively affected the behavior of the recipient, even after the handshake was finished.

“Politicians are particularly keen on prolonged handshakes, which are often used an expression of warmth but also as a means of demonstrating authority.

“However, our findings suggest that while doing so might look impressive for the cameras, this behavior could potentially jeopardize the quality of their working and personal relationships from the beginning, which could have repercussions for millions of people.”

To determine the results, 36 study participants were interviewed by Masters students about their work and career prospects. Following this, the subjects were then introduced to a second researcher, who would either shake their hand as ‘normal’ (less than three seconds), ‘prolonged’ (longer than three seconds), or not at all. The participants were unaware of the significance of the handshake throughout the study period, with their subsequent reactions analyzed.

Handshakes of less than three seconds resulted in less subsequent smiling than prolonged handshakes, but did feel more natural to those who participated. No behavioral changes were associated with the no-handshake control experiment.

This latest study follows on from another led by Dr. Nagy in 2011 that confirmed that a hug lasts about as long as many other human actions, and supports a hypothesis that we go through life perceiving the present in a series of three-second windows.