Is there a way to chemically manipulate small, confined areas on cellular surfaces? Scientists have developed a microfluidic probe to send a flow of free radicals on live cells and track the outcome using fluorescence imaging. As outlined in the journal Angewandte Chemie, this approach makes it possible for the first time to generate a reaction zone of free radicals with controlled size and concentration for subcellular research. 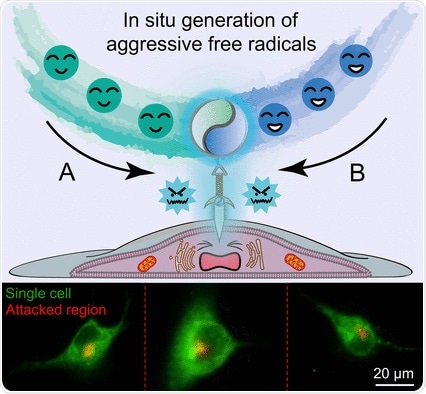 Free radicals are important stimulants for cells. When live cells are exposed to radicals, they develop intense reactions that can lead to cell injury or even death. Many anticancer drugs are based on the action of free radicals sending cancer cells to death.

However, scientists find it difficult to perform research on the reactions of live cells to radicals in a truly controlled way. Free radicals are unstable and react with their environment before reaching their targets. A team of scientists led by Jin-Ming Lin from Tsinghua University, Beijing, has now developed a microfluidic approach to continuously generate a flow of free radicals for subcellular manipulation.

To make the radicals, the researchers chose a microfluidic two-component system. In this setup, one microchannel harbored a solution of enzymes able to cleave hydrogen peroxide. Another channel contained a solution of hydrogen peroxide and an organic dye. Both channels were immersed with their ends in a nutrient solution where a live cell was placed just below the channel ends. A third channel with an upward flow ensured that the fluids leaving the microchannel ends would meet in the middle position, forming a confined reaction zone.

According to the authors, this setup ensured that the reaction zone had the size of only a few micrometers. In this zone, the enzyme horseradish peroxidase would react with the hydrogen peroxide to form reactive enzyme intermediates, which then reacted with the organic dye to give an organic radical. Immediately after their generation, the dye radicals would then attack the cell placed directly below the reaction zone.

The authors say that the tiny fluorescent spot and its movement highlight the ability of the microfluidic method to manipulate small subareas on the cell surface. “By contrast with lipophilic tracers, which stain the whole cell, it is convincing that the free radicals generated only attack the target subcellular region of the single cell,” they argue.

One particular application fascinates the authors: they envision using the microfluidic probe as a “pen” for cells. “This will enable us to directly write text or draw graphics on single cells for personalized cell marking or artwork,” they explain.