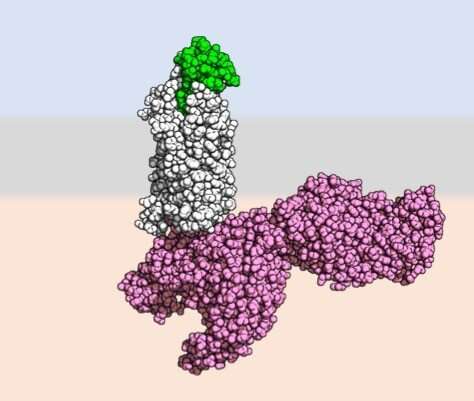 Chemokine receptors, located at the surface of many immune cells, play an important role in cell function. Chemokines are small proteins that bind to these receptors and control the movement and behavior of white blood cells.

However, despite the importance of this family of receptors, their activation mechanism remains poorly understood. In Switzerland, a research consortium from the University of Geneva (UNIGE), the Biozentrum of the University of Basel, and the Paul Scherrer Institute (PSI) in Villigen has succeeded in decoding the activation mechanism of the CCR5 receptor, a member of this family implicated in several diseases such as HIV/AIDS, cancer, and the respiratory complications of COVID-19.

This discovery represents an important step in the understanding of chemokine receptor biology, providing valuable insights for improving new drugs that this important family of receptors. It was published recently in the journal Science Advances.

The CCR5 receptor plays a major role in inflammation and immune defense, and has long been an important target for anti-HIV drugs. “Research on CCR5 began almost 25 years ago as part of the fight against AIDS,” explains Stephan Grzesiek, a professor at the Biozentrum of the University of Basel, who co-directed this work with Professor Oliver Hartley of the Department of Pathology and Immunology at UNIGE Faculty of Medicine, and colleagues from the Paul Scherrer Institute (PSI). “It is indeed fundamental to the HIV infection mechanism, but also seems to be very important in many other pathological processes, notably in cancers and inflammatory diseases. However, in order to better exploit it for therapeutic purposes, we needed to understand, at an atomic level, how activation through its binding to chemokines works.”

Chemokines are small signaling molecules that play a central role in the circulation and activation of immune cells. By binding to receptors on the membrane of white blood cells, they act as guides, ensuring that the cells reach the right place at the right time, to both maintain the immune system and respond to infection or injury. But how is the receptor able to sense the docking of a chemokine at the outside the cell? And how is this activation message transmitted to the inside of the cell so that it can respond?

Until now, the study of this phenomenon has been hampered by the difficulty of observing the 3D structures of the receptors when bound to the molecules that activate them. To this end, the Basel team, which specializes in structural biology, used cryo-electron microscopy tools that make it possible to preserve and observe the structure of the smallest elements of living organisms. “However, in order to understand the entire process, it is necessary to make use of engineered chemokines that bind to receptors more stably than the natural ones,” says Oliver Hartley. “For this, we were able to exploit the molecules that we had discovered in the course of our HIV drug research.” And indeed, some of these variants over-activate the receptor while others block them entirely.

The right key to fit in the lock

The receptor, which is embedded in the cell membrane, works like a “lock and key” mechanism. A specific part of the chemokine structure must fit into the CCR5 lock to activate a change in the structure of the receptor, which then lets it trigger the activation and migration of white blood cells. “The activation capacity of chemokines is determined by certain amino acids (protein building blocks) that must arrange themselves in a specific pattern. If this part of the chemokine adopts a straight shape, it succeeds in activating the receptor. But if the amino acids are changed, the molecule adopts a slightly different shape which, although it maintains a very strong bond with the receptor, prevents its activation,” explains Oliver Hartley. These small changes thus make the difference between receptor activators and inhibitors.