I heard this a lot when I was growing up: “You can do anything. We just want you to be happy.”

It was the 1980s, and the self-esteem movement had taken hold, imploring parents to tell kids they were “special” and destined for greatness. 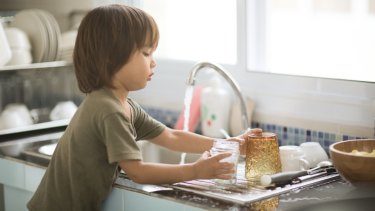 Are we raising ‘generation anxiety’?Credit:Stocksy

My parents meant well. But, as a chronically anxious child who worried about everything from the threat of nuclear war to the width of my hips, the message felt like a straitjacket.

Fast forward 40 years and we’re still teaching children to deny their feelings and pursue happiness as the holy grail.

They live in an airbrushed world where social media filters out setbacks and encourages us to “follow your bliss” and “live your best life”.

Yet these trite “inspo” slogans sit alongside statistics that portray an alarming truth: our young people are drowning in a sea of toxic stress.

ABS data shows we have the highest youth suicide rate in a decade. Waiting lists for help have blown out to the point that psychologists are saying young people are dying before they can access treatment.

In 2018, Mission Australia surveyed almost 30,000 15- to 19-year-olds and found that their number one concern is mental health, with 43 per cent naming it their biggest worry – more than doubling in three years.

This is Generation Anxiety and they are stressed out of their minds.

And why wouldn’t they be in our divided, volatile and over-stimulated modern age?

The frenetic 24-7 news cycle beamed onto phones that have become extensions of themselves warn young people of the constant threat of global terrorism, catastrophic natural disasters and irreversible climate change.

Then there’s the increasingly unstable job market, the fact that many of them will never know the security of owning their own home, and the unrelenting pressure to carefully curate their “personal brand” on social media.

Mission Australia's survey found young people are also struggling with how to cope with stress, school or study problems, and body image.

In the face of all these challenges, telling them to “do what makes you happy” or “follow your bliss” seems grossly inadequate, if not downright irresponsible, life advice.

Adolescent psychologist Michael Carr-Gregg believes children’s stress is often exacerbated by well meaning parents who try to shield their children from adversity, in what he describes as the “wussification of a generation”.

“It’s snow plough parenting, where we think we can smooth out the path for them to the point that we don’t actually allow them to ever be sad, so by the time they hit real life they’re just total unprepared for any challenges,” he says.

"If you mollycoddle these kids they never get to problem solve, or feel angry or frustrated or disappointed and they get this instant gratification that doesn’t allow them to learn how to manage their emotions.”

Our crumbling mental health system needs a radical overhaul and major investment if we’re to have a chance of turning the youth suicide rate around.

There are some positive moves afoot, including Victoria’s forthcoming royal commission into mental health, and Premier Daniel Andrews’ plan to embed psychologists, counsellors and other mental health professionals in every government secondary school in the state.

Nationally, the federal government has committed $47 million for youth mental health service headspace’s head office and a further $52 million to bolster centres across Australia – although this still falls short of what is required to meet demand.

He also wants to see as much investment in emotional literacy in schools as we channel into the traditional pillars of academic learning.

“What the Mission Australia survey tells us is that kids lack fundamental social and emotional competencies and that’s a huge problem for their mental health outcomes,” he says.

“We need to put our energy into teaching them skills like anger management, problem solving and conflict resolution.”

It’s natural to want to protect the young people we love, but as they face unprecedented challenges in a hectic modern world, we do them a disservice when we patronise them with platitudes that ignore the real stresses they face.

Instead of wanting children to be happy, maybe we should start equipping them to be human.

Jill Stark is a journalist and author of Happy Never After: Why The Happiness Fairytale Is Driving Us Mad.