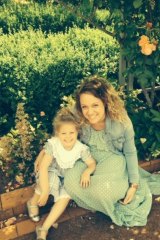 Katie Fielding found her mental health ‘took a dive’ during her second pregnancy.

Mothers' struggle to cope with psychological stress during pregnancy may result in poorer health for infants, a new Australian-US study has indicated, prompting perinatal health services to call for expectant mothers and those around them to feel comfortable seeking support.

Research from the Australian National University and Pennsylvania State University, published in Psychosomatic Medicine today, measured the cortisol levels of pregnant women during stressful experiences and found those with an unhealthy response to stress gave birth to children who had a higher number of health problems in their first three years of life.

"When anyone, including pregnant women, [is] exposed to stress, their cortisol levels rise," explained the study's lead author, Dr Michael Roettger from the ANU.

"Normally the body responds to that, but in people with depression or anxiety their cortisol levels flatline, because they're constantly stressed."

In a randomised clinical trial, researchers conducted solo interviews with 132 US women between 12 and 32 weeks pregnant about their relationship problems. A cortisol collection was taken before and after the discussion, which was taped to allow psychologists to rate the stress experienced. Participants also took part in a mental health assessment.

Mothers who had minimal reactivity to stress had children who were three times more likely to have respiratory infections, colds, fevers, and ear infections during the first three years of life. Their children also required double the amount of GP visits than children of mothers who did react to stress.

While previous research has looked at how experiencing psychological stress during pregnancy can correlate with low birth weight and delayed cognitive and physical development, this study looked specifically at the ability to cope with common psychological stress.

Dr Roettger said, while "these findings need to be replicated" in further longitudinal studies, he hoped the results would provide even further reason for a policy focus on mental health support during pregnancy.

"There is lots of attention paid to pregnant women avoiding alcohol, smoking, substance use and even caffeine. But now there is more attention being paid to treating prenatal anxiety and depression – this study emphasises this is important not only for the mother but also the child."

Katie Fielding, 35, had what she described as a "normal" first pregnancy. However, after experiencing postnatal depression, her second, two years later, was "very different".

"I was sick for the first three to four months, and my mental health really took a dive," she said. "I started experiencing suicidal thoughts, and went back on a low dose of anti-depressants."

The mental health worker from Penguin, Tasmania, was concerned by the lack of research on taking anti-depressants while pregnant, but was convinced by her GP that taking medication would be better than the alternative. Her daughter Ruby, now 9, was induced at 37 weeks so she could start more serious mental health treatment.

"There is some kind of idea in society that you're supposed to have this glow when you're pregnant, but for a lot of women it's not that at all."

Ms Fielding said she felt lucky that she was already well versed in the mental health system. Diagnosed with bipolar disorder a year after giving birth, she said her message for other women was to seek treatment and encouraged people around pregnant women who might be struggling to not be uncomfortable raising the alarm.

"I think, because you're pregnant, it's such as touchy subject, but it doesn't make it go away," she said. "If the wires in the brain aren't working properly, they aren't working."

A 2014 report by PWC and the Centre of Perinatal Excellence (COPE) estimated the annual cost of not treating perinatal depression and anxiety in Australia at $538 million.

Dr Nicole Highet, clinical psychologist and founder of COPE, said she was "not surprised" by the study, noting it highlighted the need for the promotion of information about perinatal health, as well as prevention and early intervention strategies.

"Promotion and prevention includes providing expectant and new parents with timely, quality information about emotional and mental health throughout their pregnancy and the year following birth – when we know women are most likely to develop anxiety and/or depression for the first time, or relapse if they have a pre-existing illness," she said.

There is some kind of idea in society that you're supposed to have this glow when you're pregnant, but for a lot of women it's not that at all.

Perinatal Anxiety and Depression Australia (PANDA) CEO Julie Borninkhof said, although the organisation welcomed "any research that helps build our understanding of how the mental health of expecting and new mums might impact on the health of their babies", she hoped this study would be viewed as highlighting the need to identify mental illness in pregnant women and support them through it, rather than as a reason to blame mothers.

"We need to be careful of adding to any anxiety that expecting mums may already be feeling by talking about potential negative effects on their babies," said Ms Borninkhof.

"The best outcome from this research would be for more expecting mums who experience any thoughts or feelings that worry them to know that seeking help as soon as possible ensures the best outcomes for themselves and their families."