Scientists have linked some forms of intestinal bacteria to an increased risk of  colorectal cancer, two new studies suggest.

Researchers found higher levels of nearly 30 different types of bacteria in patients with the disease compared to healthy individuals.

Some bacteria were commonly found in the mouth while others turned nutrients found in red meat and poultry into carcinogens.

The team, led by the University of São Paulo (USP) in Brazil, says it hopes the findings lead to new ways to both screen for, diagnose and treat the cancer. 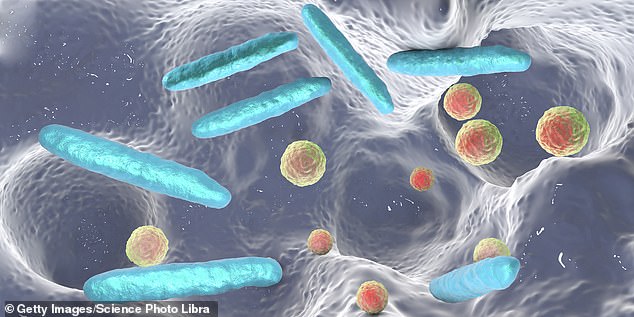 A new study led by the University of São Paulo found higher levels of nearly 30 different types of bacteria in patients with the disease compared to healthy individuals. One was Fusobacterium nucleatum (pictured), an oral bacterium that plays a role in periodontal disease

Colorectal cancer is a cancer that starts in the colon or rectum, located at the lower end of the digestive tract.

The cancer usually begins with growths called polyps. They are located on the innermost lining of the colon or rectum and become cancerous over many years.

A study published in 2017 found that colorectal cancer cases diagnosed in adults younger than age 55 doubled from 1990 to 2013, although no one is sure why.

In response, the American Cancer Society updated its screening guidelines for colorectal cancer, lowering the age that people at average risk begin regular screenings from 50 to 45.

According to the American Cancer Society, colorectal cancer is the third most common cancer diagnosed in the US, among both men and women.

It is also the third leading cause of cancer deaths in both American men and women and is estimated to cause more than 51,000 deaths in 2019.

Between the two studies, both published in Nature Medicine, the team found 29 species of bacteria in cancer patients in the US, Europe and Asia.

For the first study, researchers looked at more than 600 fecal samples from cancer patients and controls from five past studies.

They found that high levels of bacteria usually found in saliva were in the stool samples of the cancer patients.

This included Fusobacterium nucleatum, an oral bacterium that plays a role in  periodontal disease and has been linked to colorectal cancer in the past.

‘Larger numbers of oral bacteria tend to travel to the intestine in colorectal cancer patients. This migration may cause inflammation in the intestine, giving rise to the tumor,’ said first author Dr Andrew Maltez Thomas, a researcher at USP.

‘However, we don’t know the actual reason for the migration, only that there’s a link between the presence of these bacteria in the intestine and colorectal cancer and that the link deserves to be investigated further.’

The second study, led by the University of Trento In Italy found that choline, an essential nutrient found in several foods such as meat, poultry and fish, is broken down by gut bacteria and turned into a metabolite, which is necessary for metabolism.

This metabolite has been associated in past studies with an increased risk of cardiovascular disease, and the team now says it also raises the risk for colorectal cancer.

Co-author Dr Nicola Segata, an associate professor of computational metagenomics at the University of Trento said some of the species of bacteria found were only discovered recently.

‘The gene that degrades choline in a potentially dangerous metabolite is a good example,’ she said.

‘This gene is frequently carried in the gut microbiome by a bacterial species that does not have a name and that we discovered in other work earlier this year.’

Researchers say future studies will determine whether the bacteria raises the risk of colorectal cancer or if the cancer allows certain species of bacteria to flourish.

‘We detected an association, but that doesn’t necessarily imply a causal link,’ said co-author Dr João Carlos Setubal, a professor of bioinformatics at USP.

‘The question is whether specific bacteria can cause cancer or cancer creates a different environment in the colorectal duct and thereby favors certain bacteria over others.

‘We don’t yet have an answer, which would be fundamental for the results of the research described in the article to help develop therapies to treat colorectal cancer.’