Mother, 42, reveals strangers thought she was being beaten by her husband after an epileptic seizure left her covered in bruises

A woman was thought to be the victim of domestic violence when an epileptic seizure left her covered in bruises.

Sarah Bomzer, 42, was making her husband Adam, 43, a cup of tea last month when she suddenly had a fit.

The mother-of-two, of Southampton, fell to the ground, leaving her face and arms bruised. She also cut her eye after hitting it on the kitchen counter, which she fears may have blinded her had it been a few millimetres higher.

Mrs Bomzer, who has endured seizures since 2016, spent the night in hospital on painkillers and hooked up to a drip.

In a bid to raise awareness of epilepsy, she posted a picture of her bruised face on social media, only to be inundated with concerned messages from strangers who accused her of covering up her husband’s abuse. 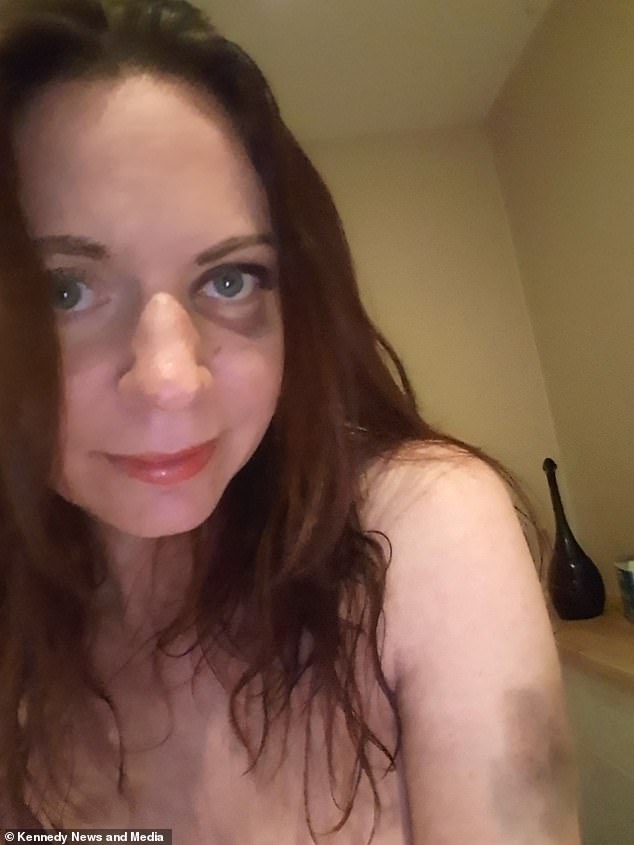 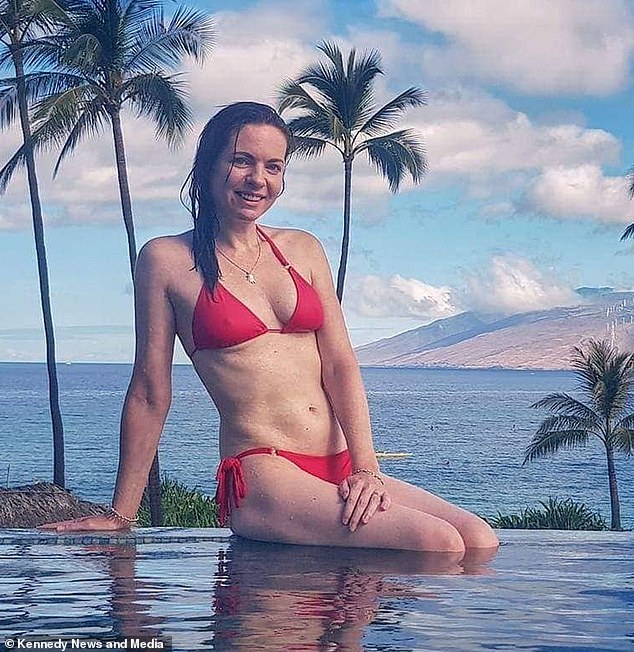 The mother-of-two (pictured before the ordeal) has endured seizures since 2016, which she initially dismissed as panic attacks brought on by the stress of divorcing her children’s father 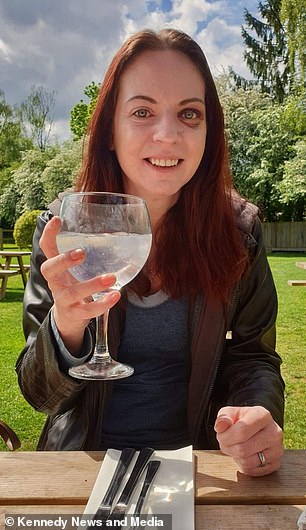 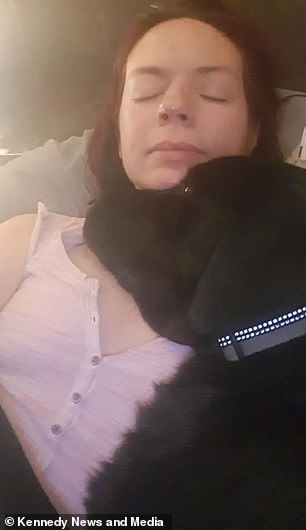 Mrs Bomzer (pictured left after the fall) is awaiting neurological tests to confirm she has epilepsy, with doctors so far just suspecting this is the cause of her seizures. Her black Labrador Bagheera (right ) has learnt to howl when she is about to have a seizure 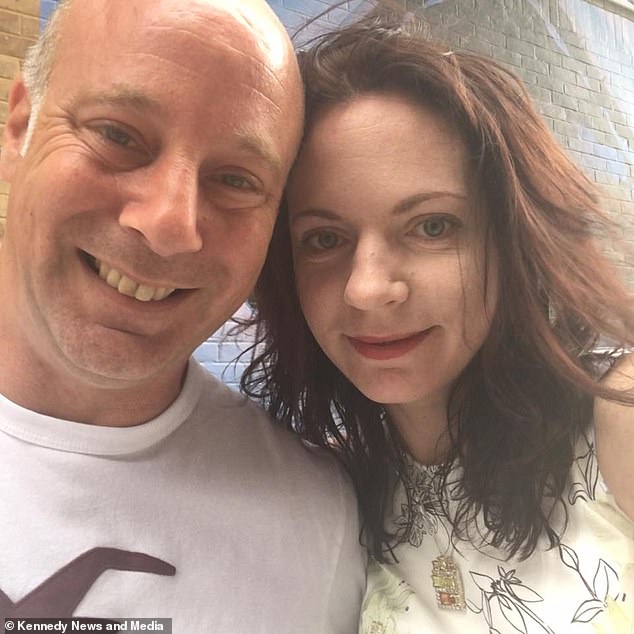 Speaking of the incident, Mrs Bomzer said: ‘I shared the photos and people questioned me about how it happened.

‘I’ve had people messaging me asking if I actually had a seizure and if I’m sure I’m telling the truth about it. Nothing malicious. All the messages were with good intentions.

‘I understand because of the way the injuries look, they look like abuse could have been the cause but if that were the case, I never would have posted about it. This happened because I have seizures.

‘I didn’t post the pictures to say “look at me, I’m a beaten wife”, I wanted to say “look I’m epileptic and this is what happens”.’

Mrs Bomzer, who works as an artist, claims her photographer husband has been left ‘extremely upset’ by the allegations.

‘My husband isn’t responsible but it feels like some people won’t let the truth get in the way of a good story,’ she said.

‘It is hurtful. Adam is extremely upset about it. He’s been looking after me so well. He’s there at every hospital visit so for people to assume he’s hurting me is awful.’ 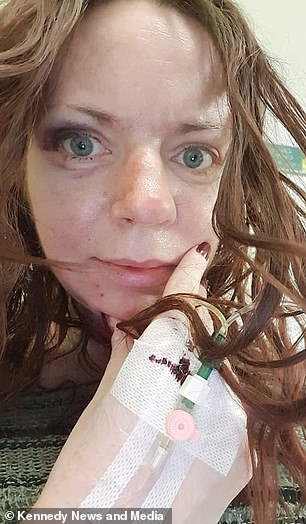 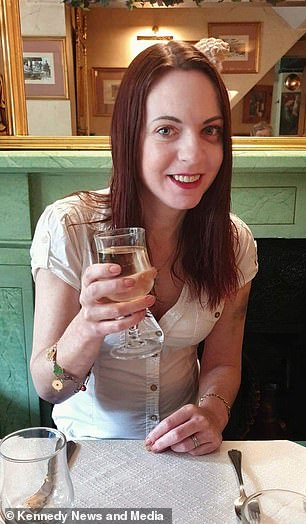 Mrs Bomzer is pictured left on a drip in hospital after the seizure, which left her with a bruised face and cut under her eye. Mrs Bomzer (pictured right with her arm and eye bruising visible) manages to keep her seizures down to just one or two a week with beta blockers and CBD oil 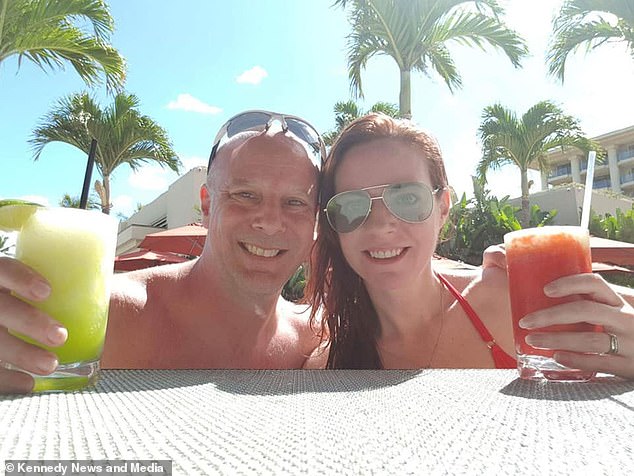 Mr and Mrs Bomzer are pictured on their honeymoon in the US last year. The couple, who have both been married before, met through a Facebook group in 2016

Mr and Mrs Bomzer, who have both been married before, said ‘I do’ last year after meeting through a Facebook group in 2016.

The couple were getting ready for a romantic weekend away last month when Mrs Bomzer’s seizure landed her in A&E.

‘Adam had booked a hotel for us to have a romantic date night away but he ended up taking me to hospital so I basically ruined our date,’ she said.

‘I’d gone downstairs to make a cup of tea and the next thing I knew I was waking up on the kitchen floor.

‘I was confused for a bit and I had to try to remember what I was I doing.

‘I remember I got up and made Adam his tea. When I went upstairs to him he asked what took me so long and I told him I had a seizure.’

Desperate not to spoil their weekend plans, Mrs Bomzer initially refused to be taken to hospital, until she saw the blood in their kitchen. 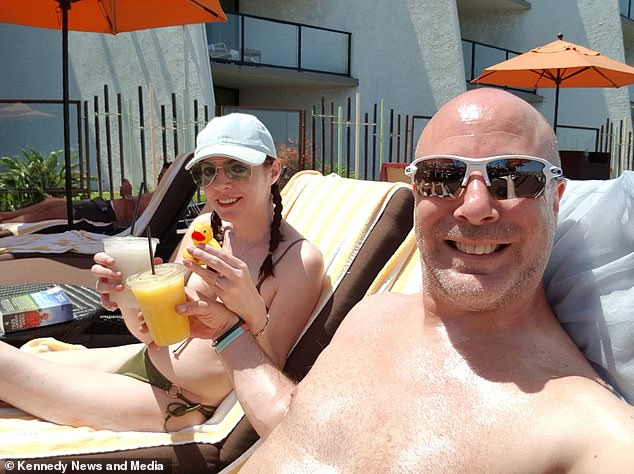 Once at hospital, Mrs Bomzer was forced to have the cut under her eye glued.

‘I’m so lucky really,’ she said. ‘If the cut was any closer to my eye, I could have lost my sight in that eye.

‘My arm took the main force of my fall so that’s where I’ve had the most pain. The bruising was pretty bad but it’s all healing nicely.’

Although her seizure caused her pain, Mrs Bomzer claims the ordeal was hardest on her husband.

‘I have no idea what’s going on but he sees me hurting,’ she said. 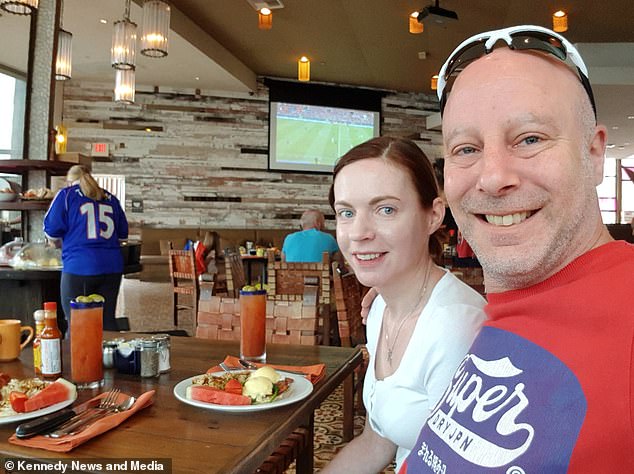 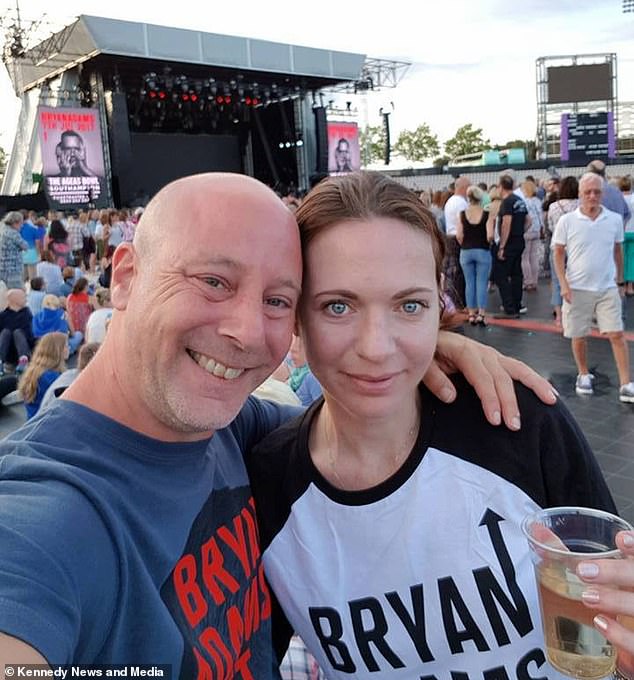 Epilepsy is a condition that affects the brain and leaves patients at risk of seizures.

Around one in 100 people in the UK have epilepsy, Epilepsy Action statistics reveal.

And in the US, 1.2 per cent of the population have the condition, according to the Centers for Disease Control and Prevention.

Anyone can have a seizure, which does not automatically mean they have epilepsy.

Usually more than one episode is required before a diagnosis.

Seizures occur when there is a sudden burst of electrical activity in the brain, which causes a disruption to the way it works.

Some seizures cause people to remain alert and aware of their surroundings, while others make people lose consciousness.

Some also make patients experience unusual sensations, feelings or movement, or go stiff and fall to the floor where they jerk.

Epilepsy can be brought on at any age by a stroke, brain infection, head injury or problems at birth that lead to lack of oxygen.

But in more than half of cases, a cause is never found.

Anti-epileptic drugs do not cure the condition but help to stop or reduce seizures.

If these do not work, brain surgery can be effective.

Mrs Bomzer, who is mother to Natalie, 19, and Nicholas Tait, 15, from her previous marriage, first had a seizure in January 2016.

She initially dismissed the episodes as panic attacks brought on by the stress of her divorce.

However, the seizures became more frequent until Mrs Bomzer was enduring up to eight a day and losing hours of her memory during the blackouts.

She has not been officially diagnosed with epilepsy but is awaiting neurological tests to confirm what doctors suspect is the condition.

‘My mum also has epilepsy but we’ve been told it’s not hereditary,’ Mrs Bomzer said.

In the meantime, she relies on beta blockers and CBD oil to manage her condition, which together reduce her seizures to just one or two a week.

As well as her medication, one of her three black Labradors Bagheera has learnt the signs of Mrs Bomzer’s seizures and alerts her when one is about to happen.

‘He hasn’t been taught how to do it but if he’s around when I’m about to go, he will let me know,’ she said.

‘If I’m sitting down he will put his paws in my lap and if I’m standing he comes up to me and howls.

‘He makes it very clear he needs my attention. The other two are dopey. ‘

Mrs Bomzer is speaking out to raise awareness of the dangers of epilepsy.

‘It’s really important to me to raise awareness of epilepsy and how it affects people,’ she said.

‘If there’s anything I can do to raise awareness of it, I’m prepared to do it.’