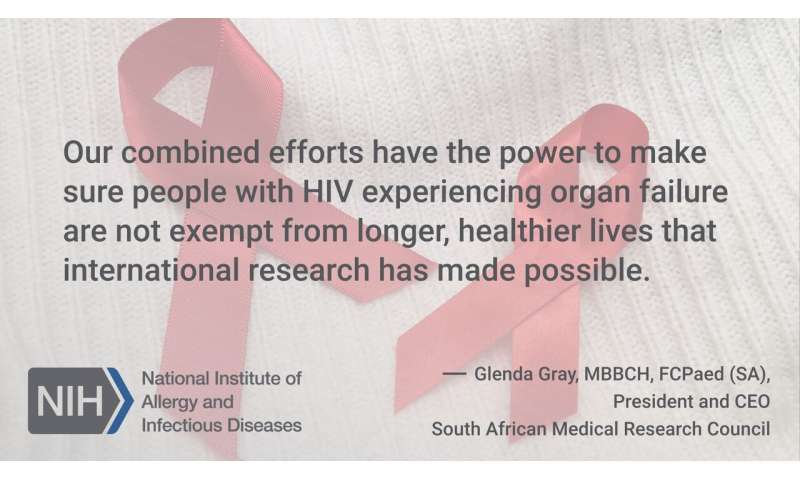 “In South Africa, the United States, and elsewhere, a growing number of people with HIV have a need for kidney transplants. Unfortunately, these gifts of life are too often in short supply,” said Anthony S. Fauci, M.D. “This observational study provides additional evidence that organs from donors with HIV could be a new donation source for people living with both HIV and end-stage renal disease. If these findings are corroborated in ongoing clinical trials, we will have a chance to improve the health of many people living with HIV and increase the overall supply of transplantable organs.”

NIAID researchers worked closely with University of Cape Town physicians and scientists to design and perform the co-funded study. All kidney transplantations and primary laboratory analyses occurred in South Africa, with additional laboratory support provided by NIAID’s Laboratory of Immunoregulation in Baltimore.

“This collaboration leverages expertise in both of our countries to address an urgent common problem,” said SAMRC President and Chief Executive Officer Glenda Gray, MBBCH, FCPaed (SA). “Our combined efforts have the power to make sure people with HIV experiencing organ failure are not exempt from longer, healthier lives that international HIV research has made possible.”

In the study, researchers from the University of Cape Town found that people living with HIV who received a kidney from a donor with HIV in South Africa had outcomes similar to patients with HIV in a previous U.S. study who received a kidney from a donor without HIV. Five years after undergoing kidney transplantation, 83.3% of people in the South African cohort survived, and 78.7% still had a functioning transplanted kidney. These findings are comparable to those from a 2010 NIAID-funded study in the United States that reported an 88.2% overall survival rate and a 73.7% kidney graft survival rate after three years. In the South African cohort, all participants were virally suppressed at the time of transplantation, and the researchers did not observe any increases in viral load—the amount of virus in the blood—among patients who maintained consistent use of antiretroviral therapy (ART).

Deceased donors in the study—many of whom were unaware of their status—had strains of HIV genetically distinct from the transplant recipients. Recognizing this, investigators sequenced the virus genomes of donor-recipient pairs and analyzed blood samples collected from recipients at multiple follow-up visits to determine if so-called HIV superinfection occurred.

HIV superinfection refers to the acquisition and establishment of a second genetically distinct strain of the virus in a person who already has HIV. Research has shown that people with HIV superinfection usually respond well to standard ART and generally do not experience worse clinical outcomes. However, because some strains are resistant to certain anti-HIV medications, researchers watched study participants closely for possible superinfections with strains of HIV that might be resistant to a recipient’s ART regimen. In this study, investigators identified only one potential case of transient superinfection, but extensive analyses determined that this was most likely residual virus carried over from the donor during the transplant and not a true sustained superinfection. Researchers will continue to monitor all the participants for any signs of superinfection. While 10 participants changed their ART regimens during the study, none did so because of drug resistance.

The study’s lead researcher was Elmi Muller, M.D., Ph.D., of the Groote Schuur Hospital in Cape Town. “This work builds on the groundbreaking research by Dr. Muller and her team in South Africa beginning more than 10 years ago that opened the door to the exciting field of organ transplantation between people with HIV around the world,” said study author Andrew D. Redd, Ph.D., of the NIAID Laboratory of Immunoregulation. “By using the most advanced laboratory techniques available, our team showed that HIV superinfection is of limited risk in these patients. Taken together with the positive long-term clinical outcomes we found in our study, we feel our data strongly support the expanded use of these life-saving transplantations.

“This project would not have been possible without the combined effort of our South African and U.S. teams, which demonstrates the power of truly collaborative international research,” he added.

People with HIV have a higher risk of end-stage kidney diseases requiring organ transplantation because of damage caused by the virus itself and by common coinfections and associated comorbidities, such as hepatitis B and C viruses, hypertension and diabetes mellitus. Certain antiretroviral treatments also can cause toxicities that damage these organs. Until recently, people with HIV were rarely eligible to receive organ transplants from HIV-negative donors because health outcomes were projected to be poor.

Such transplants were illegal in the United States until the passage of the HIV Organ Policy Equity (HOPE) Act of 2013. The law intended to spur an increase in the availability of organs for transplantation for people with HIV, given the high frequency of HIV-related comorbidities that can necessitate organ transplantation. The HOPE Act of 2013 permits U.S. transplant teams with an approved research protocol to transplant organs from donors with HIV into qualified recipients with HIV and end-stage organ failure, a practice that may shorten the time people wait to receive a transplant.

Previous research supported by NIAID demonstrated that by carefully selecting people with HIV and organ failure who are otherwise healthy to receive a kidney or liver from an HIV-negative donor, patient and organ graft survival rates could be similar to those of transplant recipients without HIV. These findings provided the scientific basis for the initial HIV-positive to HIV-positive kidney transplants in South Africa and the passage of the HOPE Act of 2013.