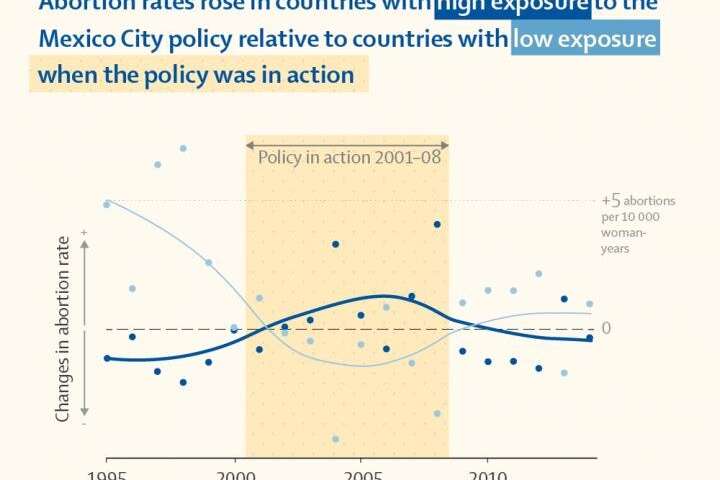 The most comprehensive study to measure the impact of the Mexico City policy between 1995 and 2014 finds that abortion rates rose substantially among women in sub-Saharan African countries with high exposure to the policy relative to countries less exposed. In addition, the use of modern contraception declined and pregnancies increased. This pattern of more frequent abortions and lower contraceptive use was reversed after the policy was rescinded, suggesting a causal effect, according to an observational study published in The Lancet Global Health.

The Mexico City Policy, also known as the Global Gag Rule, is a US government policy that prevents federal funding from being used overseas to support any organisation that performs or provides counselling on abortion. As the world’s biggest donor of development assistance, the US government has instated and rescinded the policy along partisan lines within the first week of a new administration since its creation by the Republican Reagan administration in 1984.

This study looked at induced abortion, contraception use and pregnancy rates. It used data from 26 sub-Saharan African countries and over two policy transitions—from Clinton to Bush, then from Bush to Obama (1995-2014) – and compares rates in countries that had high or low exposure to the Mexico City Policy. It used the Demographic and Health Surveys (nationally representative household surveys) to estimate abortion and pregnancy rates for 743,691 women, and used the UN Population Division’s World Contraceptive Use dataset to estimate use of modern contraceptive methods.

The authors used a “difference-in-difference” approach to determine if any changes seen in rates of abortion, contraceptive use, and pregnancy over time were due to the policy: this would be the case if the difference between the rates in high-exposure countries versus low-exposure countries was significantly greater when the policy was active than when it was not active.

The difference-in-difference in abortion rates between high-exposure and low-exposure countries was on average of 4.8 per 10,000 —a statistically significant 40% increase relative to when the policy was not in effect. The corresponding difference-in-difference was 3.2 percentage points lower for contraceptives and 3.2 percentage points higher for pregnancies—a relative decrease of 13.5% and a relative increase of 12.0%, respectively.

The authors note that while the policy’s restriction on funding to abortion-giving organisations implies its intention is to reduce abortions by reducing their availability, many of the organisations affected by the restrictions in funding are also distributors of modern contraception. Therefore, they suggest that the increase in abortions when the policy is in effect could be due to a reduction in the availability of modern contraception and a subsequent increase in pregnancies.

Dr. Eran Bendavid from Stanford University, USA, author on the study, comments on the possible impacts of the policy outside of the scope of this study , “The full consequences of the policy include additional potential harms to maternal health that we do not capture. Because abortions are an important cause of maternal mortality, the increase in abortion uptake that we find might also increase maternal deaths—and possibly disproportionately given that abortions under the policy could be less safe if they were less likely to be performed or guided by experienced organisations and providers. Our estimates of excess abortion under the policy therefore provide only a partial estimate of the policy’s harm to maternal health.”

Nina Brooks from Stanford University, USA, comments on their findings, “The health of mothers is a global priority. Our findings suggest how a US policy that aims to restrict federal funding for abortion services can lead, unintentionally to more—and probably riskier—abortions in poor countries.”

The authors note some limitations of their study. Firstly, abortions are under-reported in the survey,; however, the authors point out that this is unlikely to undermine their main findings, as this bias is unlikely to apply to periods when the Mexico City Policy was and was not in effect and across countries with high and low exposure to the policy. The authors also simulated various forms of under-reporting, and their main results were statistically unchanged, suggesting that underreporting does not undermine the results.

Secondly, to measure exposure to the Mexico City Policy, they use country level numbers on US foreign aid funding. How this affects individual family planning organisations’ funding at a regional level is unknown, as this data is not available; however, it is likely to be proportionate to the measure the authors used.

Finally, the authors note that there may also be alternative factors influencing the abortion, contraception and pregnancy rates. However, this is unlikely as the authors accounted for country differences, common changes over time, individual-level characteristics (such as age and education) and country-level characteristics (such as per capita GDP and population) to minimise this concern.