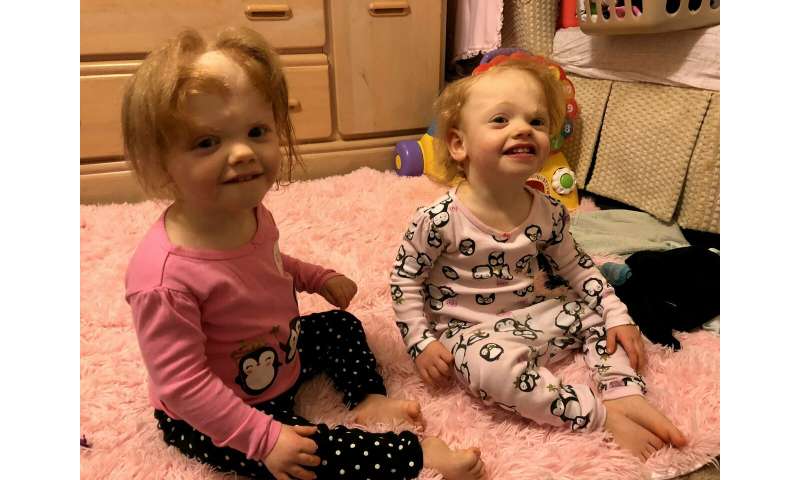 Over a year and a half after the successful separation of two infant twins joined at the top of their heads, surgical team leaders report on this dramatic case in the Jan. 24 New England Journal of Medicine. The surgeons describe the innovative devices, elaborate planning and precisely orchestrated teamwork needed to perform the complex separation surgery at Children’s Hospital of Philadelphia (CHOP).

Today Erin and Abby Delaney are thriving two-year-olds, living with their parents Heather and Riley in Mooresville, N.C. In June 2017, their 11-hour separation surgery made them international celebrities at 10 months of age. Among craniopagus conjoined twins (those joined at the head), they were among the youngest ever known to be successfully separated.

“Infants with this condition heal faster and better the younger they are at separation, because of the plasticity and regenerative powers of the young brain,” said neurosurgeon Gregory Heuer, MD, Ph.D., who co-led the surgery with plastic surgeon Jesse Taylor, MD, as members of a 30-person multidisciplinary team. “However, we need to balance this advantage against the risks of performing major surgery in infants, especially in such an extremely rare complex condition.”

For conjoined twins, already a rare occurrence, the Delaney twins’ condition was among the rarest of the rare. Craniopagus conjoined twins occur about six times in 10 million births, and even more rarely, the girls were totally fused, with their connection extending deep into brain tissue. Of particular concern, they shared a superior sagittal sinus, the large vessel that carries blood from the brain to the heart.

The current report details how the team used and adapted sophisticated surgical technologies for the separation. Computer-aided design and modeling enabled the team to print a three-dimensional model to assist in surgical planning. After surgeons initially cut through the bone where the babies’ skulls were joined, the team attached a custom-designed external distraction device, which very gradually pushed the twins apart by one or two millimeters a day prior to full surgical separation months later. 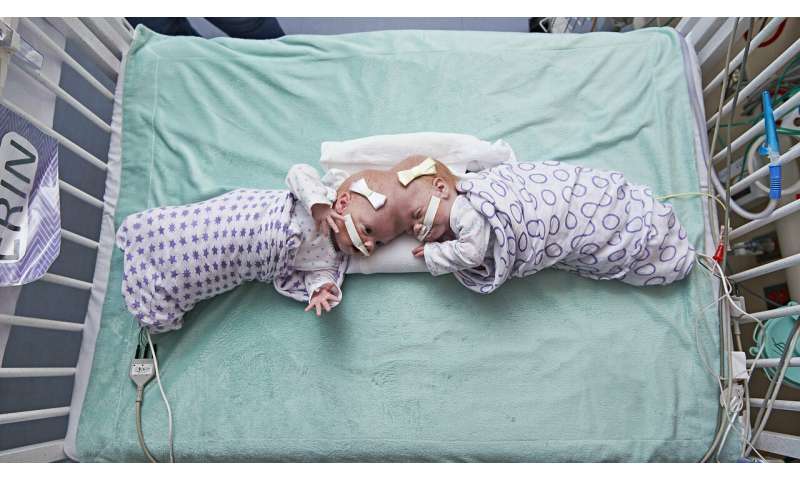 For the final separation surgery, the team used a computer-aided intraoperative navigation system to map the interconnected blood vessels, particularly the sagittal sinus, which needed to be painstakingly divided between the twins. That visualization tool offered continuous knowledge of the surrounding anatomy during the course of surgery, when vessels and brain tissue were sometimes partially obscured.

Erin and Abby moved to the hospital’s intensive care unit after the 11-hour separation surgery, and were discharged to inpatient rehabilitation two months later, shortly after their first birthday. Erin was discharged in October 2017, four months after the surgery, and stayed with her parents at the Philadelphia Ronald McDonald House until Abby was discharged one month later. They were finally able to go back home to North Carolina just before Thanksgiving in 2017.

The journal article summarizes the condition of the twins 11 months after separation, when they were 21 months old. Surgeons and clinicians will continue to monitor the girls’ progress for years to come. As occurred during their hospital stay, Erin and Abby will continue to be followed by nutritionists, developmental pediatricians and other specialists. In addition, both will need a synthetic implant at age four or five to cover the openings in their skulls necessitated by the separation surgery.

In the meantime, their parents report that Erin and Abby, now two and a half years old, are “exceeding all expectations.” Heather Delaney said, “Erin is crawling everywhere and enjoying her new-found freedom…she is so engaged and curious.” Her sister Abby is starting to sit up on her own, feisty and sassy. “She rolls around the house like it’s her job and gets into everything,” added Heather.

“We are so grateful and feel so blessed that we get to be their parents and watch them grow and thrive,” said Riley Delaney.