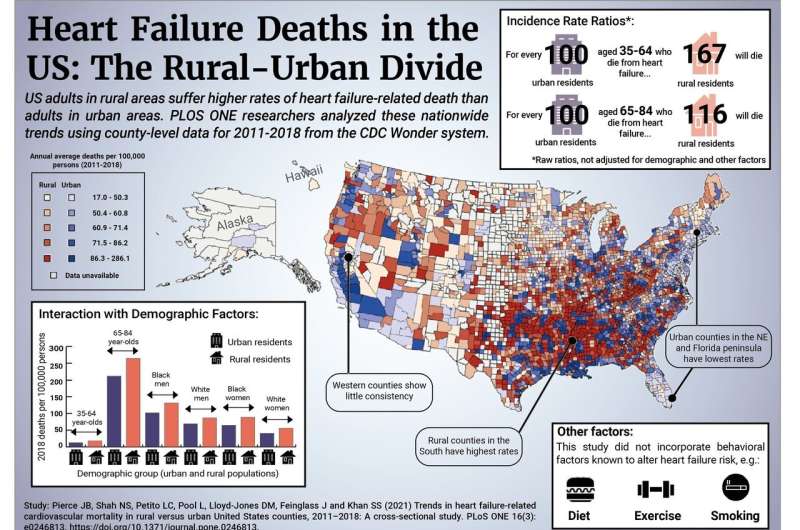 A nationwide analysis shows that, between 2011 and 2018, adults in rural counties experienced higher rates of death related to heart failure than adults in urban counties. Jacob Pierce, Sadiya Khan, and colleagues at Northwestern University Feinberg School of Medicine in Illinois present their findings in the open-access journal PLOS ONE on March 3, 2021.

Previous research has shown that cardiovascular disease is more prevalent among adults living in rural U.S. counties than those in urban counties, and that deaths attributed to heart failure have risen nationwide since 2011. However, no prior studies have quantified differences in heart failure deaths in rural compared with urban counties.

To address that gap, Pierce and colleagues analyzed nationwide, county-level data from the Centers for Disease Control and Prevention on deaths between 2011 and 2018 for which cardiovascular disease was reported to be the underlying cause of death, and heart failure a contributing cause. The data covered adults aged 35 to 84.

The researchers also examined county-level factors that could contribute to the observed urban-rural differences, including socioeconomic and demographic factors, clinical risk factors (such as diabetes or obesity), and geographical physician density. Socioeconomic factors and clinical risk factors appeared to be particularly significant contributors to the urban-rural divide—most strikingly, mortality in young black men showed the largest increase over the study period at an average of +6.1% (95% CI: 3.7 to 8.5%) per year.

To address the observed disparities, these findings suggest the need for extensive efforts that target health and economic policy, socioeconomic disparities, access to care, and clinical and behavioral risk factors. Further research could examine even finer geographical scales and incorporate data on behavioral risk factors, such as smoking and diet, which were not publicly available for use in this study.