People who survive severe cases of the novel coronavirus may have immunity that is longer-lasting, a new study suggests.

Researchers found antibodies levels remained high in patients who were hospitalized with COVID-19 for up to four months.

What’s more, these antibodies were linked to other neutralizing antibodies that kill the virus on contact and stop it from reinfecting.

The team, from Harvard Medical School and Massachusetts General Hospital, says the findings provide evidence for measuring antibody levels as a tool to track the spread of COVID-19 within a community.

It comes as President Donald Trump claimed, without evidence, that he could be immune to the coronavirus ‘for a lifetime’ after battling the disease. 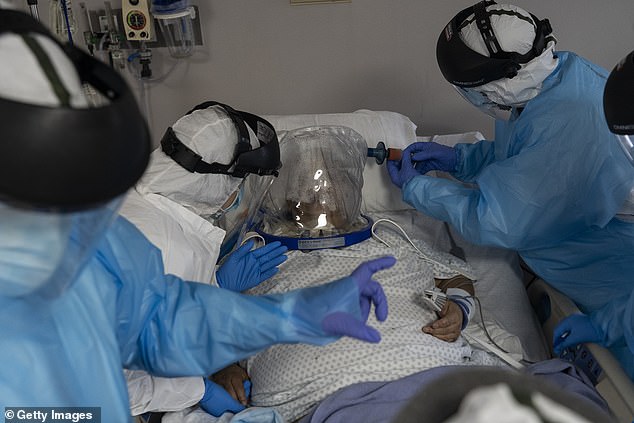 In a new study from from Harvard Medical School and Massachusetts General Hospital, researchers looked at blood samples of more than 300 patients, most of whom had severe cases of coronavirus. Pictured: Medical staff treat a patient who is wearing a ventilator in the COVID-19 ICU at the United Memorial Medical Center in Houston, Texas, July 28

Levels of the IgG antibody, which the body produces in the late stages of infection, remained high for up to four months (above)

Scientists have known for a long time that the immune system produces antibodies after someone is infected with the coronavirus.

However, ‘there is a big knowledge gap in terms of how long these antibody responses last,’ said senior author Dr Richelle Charles, an investigator in the Division of Infectious Diseases at Massachusetts General Hospital.

For the study, published in Science Immunology, the team looked at blood samples from 343 patients with COVID-19.

Most the patients had severe cases, with 93 percent requiring hospitalization.

All the samples were taken up to four months after the patients first started experiencing symptoms such as cough, fever, and shortness of breath.

Researchers separated the plasma from the blood and swabbed it on laboratory plains that contained the receptor the virus uses to enter and infect cells.

Next, they examined how different types of antibodies in the plasma bound to the receptor.

One of the antibodies, immunoglobulin G (IgG), is a protein that the body produces in the late stages of infection.

IgG levels remained high after four months, and were associated protective neutralizing antibodies that were also found in the blood.

‘That means that people are very likely protected for that period of time. We showed that key antibody responses to COVID-19 do persist,’ Charles said. 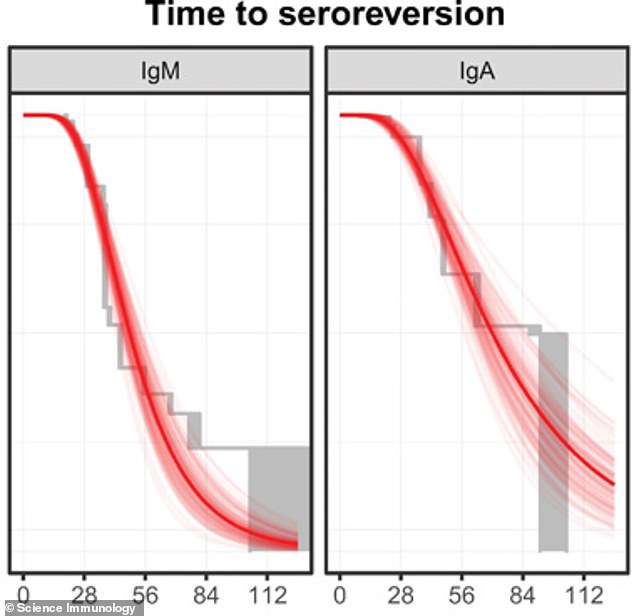 Levels of IgA and IgM antibodies, which are produced a few days after infection, had low levels that lasted for no more than two-and-a-half months (above) 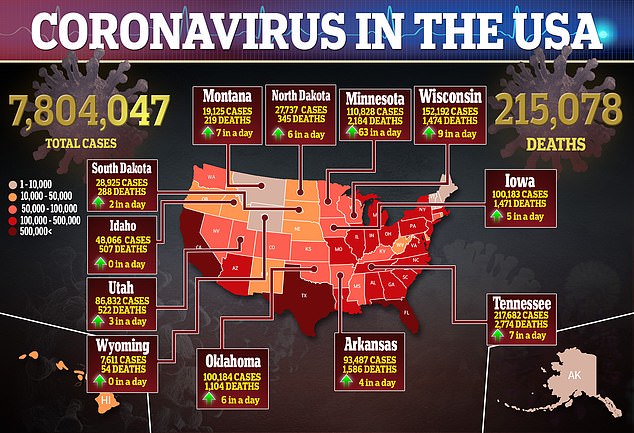 Results showed that they remained at low levels, and for no more than two-and-a-half months, on average.

Researchers say this is because these two anitbodies are typically made by the body a few days after infection and are not known to be long-lasting.

‘We can say now that if a patient has IgA and IgM responses, they were likely infected with the virus within the last two months,’ Charles said.

‘There are a lot of infections in the community that we do not pick up through testing during acute infection, and this is especially true in areas where access to testing is limited,’ said senior author Dr Jason Harris,a pediatric infectious disease specialist at Massachusetts General Hospital.

‘Knowing how long antibody responses last is essential before we can use antibody testing to track the spread of COVID-19 and identify ‘hot spots’ of the disease.’ 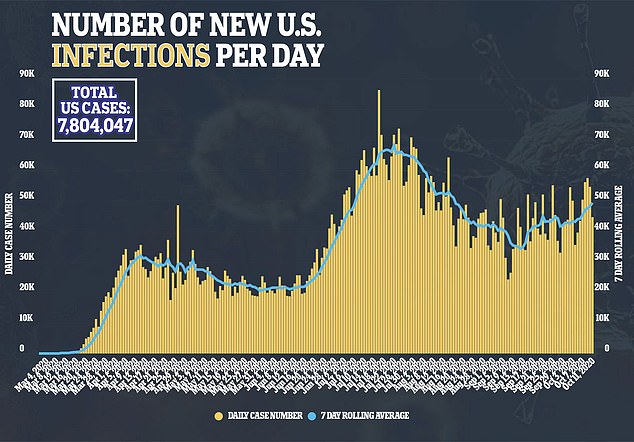 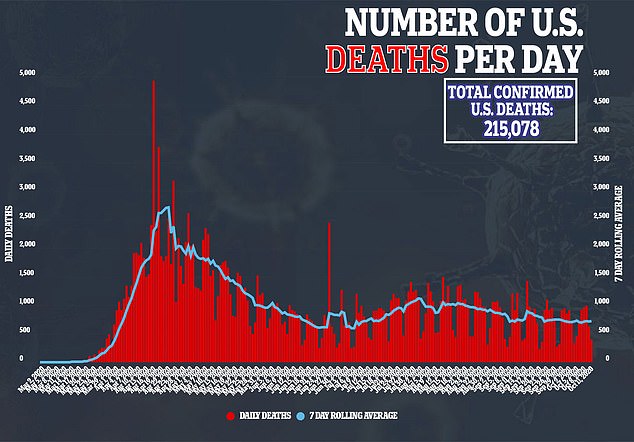 The study comes as President Trump claimed that he may be immune forever.

‘It looks like I’m immune for, I don’t know, maybe a long time, maybe a short time. It could be a lifetime. Nobody really knows, but I’m immune,’ he said during an interview on Fox News on Sunday.

Trump also made a similar claim on Twitter after his physician, Dr Sean Conley, said the president was cleared to resume public activities.

‘A total and complete sign off from White House Doctors yesterday. That means I can’t get it (immune), and can’t give it. Very nice to know!!!’ Trump tweeted on the same day.