Bad genes are NOT an excuse for being overweight: Study finds regular jogging can undo the burden of ‘fat DNA’

Going for a run can undo the effects of ‘fat genes’ and even people who are naturally overweight can slim down by exercising, a study has confirmed.

Couch potatoes may no longer be able to hide behind the excuse of their DNA making them overweight.

A study on nearly 20,000 people found regular jogging was the best type of exercise to ‘blunt’ the effects of genes which raise someone’s risk becoming obese.

Lacing up and going for a jog was effective for reducing people’s height-to-weight ratio (BMI), body fat percentage and the size of their hips. 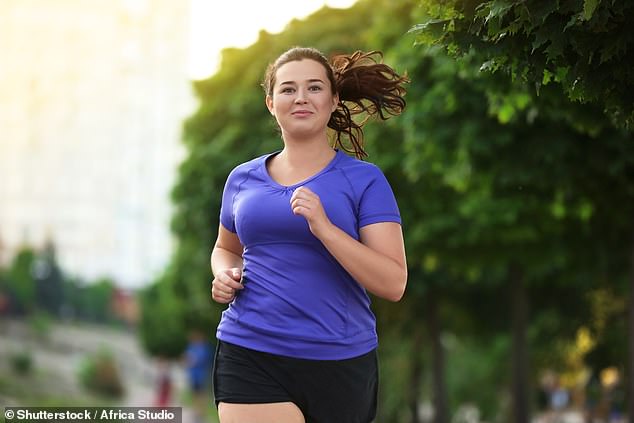 Research found that jogging was the most effective way for people to shed body fat, and it even manages to ‘blunt’ the effects of ‘fat genes’ which make people naturally more overweight (stock image)

Scientists at the National Taiwan University studied the impact of exercise on 18,424 Chinese people between the ages of 30 and 70.

The team measured people’s bodies, noted how much exercise they did and looked at their DNA to see if they were naturally more likely to be obese.

More than 400 genes have been linked to a higher risk of being overweight, according to Harvard University, by affecting people’s appetites, their metabolisms or the way their bodies store fat.

The simple reason people become obese is because they eat more calories than their body uses up.

Unused calories – which usually come in the form of sugars or fats – are stored by the body as fat cells and build up over time if the body doesn’t burn them in movement.

Anyone can lose weight by making sure they have a deficit of calories – that is, they eat fewer than their body needs to function.

However, genetics also play a role in weight gain and some people are naturally more likely to get fat than others.

Researchers say there are more than 400 genes which have been linked to obesity and may make people gain weight faster or find it more difficult to lose it.

Someone’s DNA may affect how big their appetite is, the way their body stores fat, how quickly they use calories, the cravings they get and how likely they are to use eating as a form of comfort.

Genes have different influences on different people and, for some, genes account for only 25 per cent of the factors making them more likely to be fat, while for others it can be as high as 80 per cent.

There are other more specific factors at play, too: stress or a lack of sleep may be more likely to make some people overweight, and babies whose mothers smoked while they were in the womb are likely to be fatter, while breastfed babies have a reduced risk.

People in China are significantly less fat than those in the UK and US – the country has an obesity rate of just seven per cent among over-15s, according to the Organisation for Economic Co-operation and Development (OECD).

Past research has suggested this is because Chinese people in China spend less time sitting down, are more active, and eat more carbohydrate and less fat.

As well as the BMI, body fat and hip size, the Taiwanese scientists also measured people’s hip-to-waist ratio and their genetic risk scores (GRS), which dictate the role their DNA plays in obesity.

And they considered the effects of 18 different types of exercise on helping people to slim down.

Dr Lin added: ‘Among the 18 kinds of self-reported regular exercise, six mitigated the genetic effects on at least one obesity measure.

The team claimed, however, that cycling, swimming, the video game Dance Dance Revolution and Qigong – a tai chi-like martial art – do not have the same effect.

‘Exercises in cold water such as swimming can especially stimulate appetite and food intake.

‘Dance Dance Revolution, a computer game based on dancing with music videos, is not as formal as international standard dancing.

The research was published in the journal PLOS Genetics.