We swaddle babies, creating a gently pressurised cocoon to help them feel safe and secure. Weighted blankets are said to have the same effect on adults, calming them down and helping to soothe anxiety. But do they, or the many other products out there marketed as anxiety-relievers, actually work?

It depends on whether you trust evidence over anecdote. 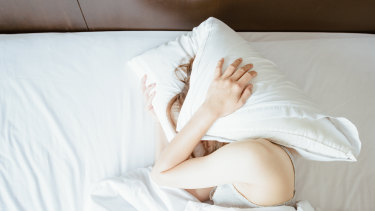 Sleep and anxiety often go hand-in-hand. The jury is out as to whether weighted blankets can help.Credit:Getty

Weighted blankets and their cosy embrace (or claustrophobic to some) were originally used by occupational therapists as a tool to help overstimulated people with autism.

Then others, like Patrick Roche, who were playing around with different remedies for their sleeplessness including meditation, reducing caffeine and exercise, tried them on for size, found the feeling of being “smushed” helped them switch off, and he started manufacturing them.

US brand Gravity blankets netted nearly US$5 million in their 2017 Kickstarter campaign, Time named the blankets one of 2018’s best inventions and today, with their promises to relieve stress, alleviate anxiety and achieve a faster and deeper sleep, the weighted blanket market has become a heavy hitter in the anxiety product, sleep-aid space.

I tried out the Neptune blanket, which gets its density from glass beads sewn evenly into the fabric, and comes in different weights (the idea is to choose a heaviness that is 10 per cent of your body weight). Retailing for about $235, it’s not cheap (depending on the brand, prices start at about $120 and go up to about $300), and it promises to give that “’hugged feeling in stressful situations”, which is a thing, it turns out.

Deep Pressure Stimulation (DPS) is the “firm but gentle” sensation from being squeezed, hugged, stroked or held that some small studies have found, relaxes the nervous system.

DPS works with the hands (massage or firm hugs), special massage tools, or products, like weighted blankets. It’s important to note that the very limited research has found that it benefits some, but not all. I know people who can think of nothing more restrictive than being in a firm embrace or underneath a dense blanket.

Research specifically on weighted blankets and anxiety is similarly limited, but small studies have found more people respond positively than not.

As for me, with the current heatwave, it took me weeks to roadtest it. When I eventually did, while underneath a fan, I did find it immediately comforting and not oppressive. I wouldn’t use it in summer though.

And of course, there are an array of other products which also claim to relieve anxiety, promote better sleep, like Bach rescue remedy, essential oils, magnesium spray, colouring books, guided meditations/anxiety apps, journals.

So what do the experts think?

“Unless a strategy has scientific rigour demonstrating its effectiveness we might find some people who report effectiveness and others who don't,” says Dr Jodie Lowinger, a clinical psychologist and founder of the Sydney Anxiety Clinic and coaching clinic Mind Strength.

Dr Tim Sharp, also a clinical psychologist and founder of Sydney's Happiness Institute, agrees that many “anxiety” products “have little if any evidence of efficacy”.

“That doesn’t mean, however, that they don’t work,” he says. “Some might work via a placebo effect; and if so, that’s not such a bad thing. They might also work by just enhancing the user’s sense of self-efficacy, or control over the world. That is, if someone believes that by using something and taking action they’re taking more control of their health and wellbeing then again, this might not be entirely bad.”

That said, he says he’d be “hard-pressed” recommending oils or sprays to relieve anxiety. And, he adds, there are risks if people start to believe they can only experience relief through a product they are using.

“In doing so, they might believe less in what they, themselves can do and accordingly, make less effort trying to implement other strategies that require more effort (such as mindfulness or meditation practice),” Sharp explains. “Using something like medication or supplements is quick and easy. But it can also lead to failure and disappointment and frustration which for some people, could be quite dangerous.”

There is however good evidence of journaling/ expressive writing and gratitude practice, he says:

“Both of these have been shown to lead to improvements in mental health and happiness & wellbeing.”

Meditation and mindfulness, including guided practices, also have the experts’ endorsements.

“There is substantial scientific support for meditation and mindfulness strategies that help a person become an objective observer of their thoughts and refocus on the present moment,” Lowinger says. “Focusing on the present moment helps to reduce the impact of worry thoughts and the triggering of the fight or flight reaction which we experience as anxiety. Similarly, strategies which slow the breathing down typically re-engage the parasympathetic nervous system and stop the 'hijacking' amygdala.”

Which brings us back full circle to whether or not you should try a weighted blanket? Sure, if you’re someone who loves a good hug, you may well find it helpful for both anxiety and sleep. Then again, you could just save your coin and invest in a good hug instead.