Grandfather, 56, with persistent cough dies 16 DAYS after finding out he had bowel cancer that had spread to his lungs

A ‘fit and healthy’ grandfather died just 16 days after he was diagnosed with terminal bowel cancer.

Trevor Walker, 56, battled with a cough for two months, which his GP dismissed as a chest infection.

Over the next few weeks, the football fan was unable to go to work and could do no longer walk further than 500m (164ft).

It was not until his wife of 24 years Mandie Walker, 50, noticed how skinny he looked coming out of the shower, that the couple insisted he be referred to hospital.

Blood tests and biopsies revealed Mr Walker, of Plymouth, had bowel cancer that had spread to his lungs and was too advanced to treat.

Mr Walker spent his final days in hospital, breathing via a machine. He died on March 1 surrounded by his family. His last words were ‘I love you all’.

Scroll down for video 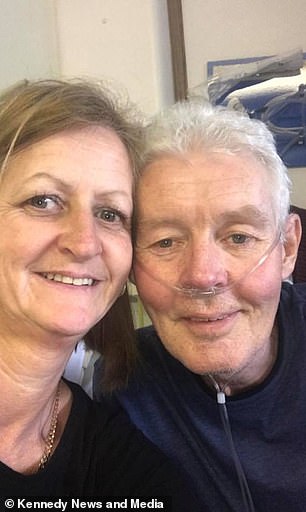 Trevor Walker died on March 1, just 16 days after he was diagnosed with bowel cancer. The disease spread to his lungs, causing a cough that was dismissed as a chest infection. He is pictured in hospital on oxygen with his wife Mandie Walker. The couple, who were together for 32 years and had three children, are pictured together right before he became ill

Speaking of her husband’s battle with cancer, Mrs Walker said: ‘From the day he was diagnosed to the day he died, was just 16 days.

‘It was really traumatic seeing him deteriorate so rapidly. He lost so much weight, he was all skin and bones.

‘He went from having no symptoms whatsoever just this cough that everyone put down to a chest infection.

‘I was there and our three children were all there with him when he went. His very last words were, “I love you all”.

‘I lost my soul mate after 32 beautiful years together. I hold onto all the memories we had together, even those 16 days.’

He visited his GP in early  2018, who prescribed a 10-day course of antibiotics.

‘At the time, there were so many people all over Plymouth and the country with a cough,’ Mrs Walker said. ‘There had been something going round.’

WHAT IS BOWEL CANCER?

Bowel, or colorectal, cancer affects the large bowel, which is made up of the colon and rectum.

Most cases have no clear cause, however, people are more at risk if they:

More than nine out of 10 people with stage one bowel cancer survive five years or more after their diagnosis.

This drops significantly if it is diagnosed in later stages.

According to Bowel Cancer UK figures, more than 41,200 people are diagnosed with bowel cancer every year in the UK.

It affects around 40 per 100,000 adults per year in the US, according to the National Cancer Institute.

When the antibiotics failed to ease his symptoms, Mr Walker had a chest X-ray, which revealed fluid on his lungs.

‘We still just thought it was a chest infection and it was going to take time to clear up’, Mrs Walker said.

The grandfather-of-three was then given a second 10-day course of antibiotics, which again did nothing to relieve his cough.

By February, Mr Walker was unable to walk without becoming breathless.

‘He was getting really down and depressed because he couldn’t do any of the things he usually would,’ Mrs Walker said.

The near-constant coughing also meant he could only sleep sitting up, with his wife often having to pat his back in the night to clear his chest.

Despite his deterioration, the couple still thought it was just a chest infection until Mrs Walker saw how much weight he had lost when he got out of the shower.

‘It got to the stage, Trevor felt so weak and breathless he couldn’t even stand in the shower,’ Mrs Walker said.

‘We’ve got a big walk-in shower so I went to get a garden chair to put in there he could sit on.

‘It was only then, when I saw him coming out the shower and I looked at the back of him that I suddenly realised how much weight he had lost.

‘He kept saying he hadn’t but I told him, “This isn’t right, you’ve lost too much weight”.’

Mrs Walker’s mother Julia Hammacott, who died aged 71 in May, had just been diagnosed with lung cancer. She was also experiencing a persistent cough and weight loss. 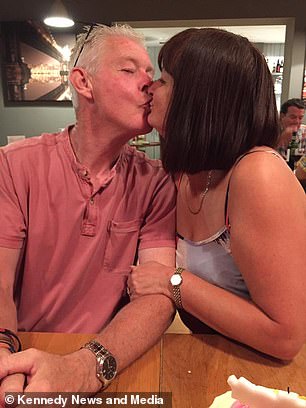 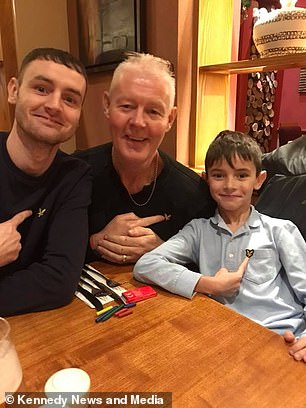 Mrs Walker (pictured left sharing a tender moment with her husband) claims she has lost her ‘soulmate’ and will always cherish the memories they shared, ‘even those 16 days’. The late family man is pictured right with his son Luke Walker, 31, and grandson Jamie Walker, 10

After going back to his GP, Mr Walker was eventually referred to hospital where he had blood tests and a biopsy.

While awaiting the results, the grandfather went home, where things took a dramatic turn for the worse.

‘He was home less than 48 hours when we had to phone an ambulance’, Mrs Walker said.

‘He felt really bad and he couldn’t breathe even with the portable oxygen so he had to stay in the hospital after that.’

The tests revealed Mr Walker had bowel cancer that had spread to this lungs.

‘The first time Trevor and I heard the words bowel cancer from the doctors, we were stunned,’ Mrs Walker said.

‘We cried into each other’s arms and said, “We’ll fight this, we’ll get through it, it will be fine”.

‘He had no symptoms. He had regular bowel movements, there wasn’t any blood. All he had was this cough that everyone seemed to have.

‘But it turned out the fluid on his lungs was secondary cancer because the bowel cancer had spread so far and so fast. It was devastating.’

The couple later discovered his disease was terminal. 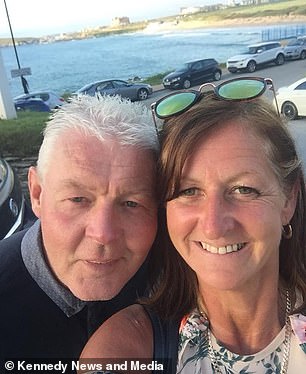 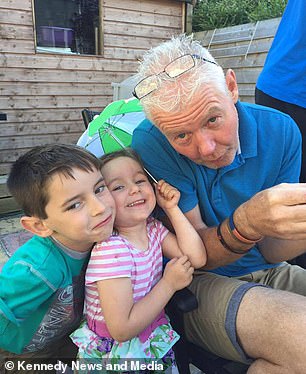 Mr Walker was ‘so in love’ with his wife (pictured together left) and put her on a ‘pedestal’. The ‘very fit’ sports fan (pictured right with Jamie and his granddaughter Laila Walker, six) became ‘skin and bones’. He was unable to work, walk more than 500m or sleep unless sitting up 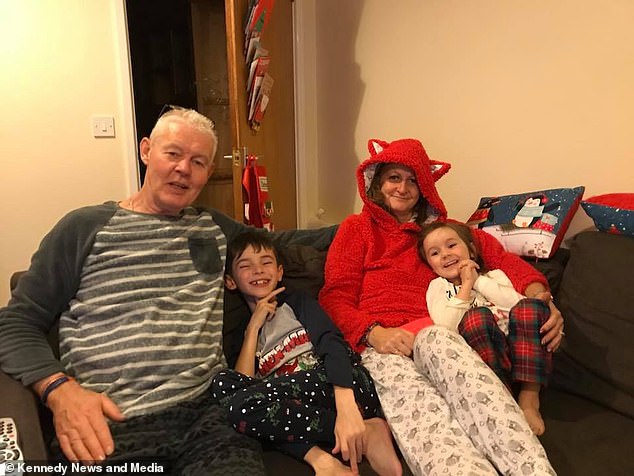 Mr Walker is pictured on his last Christmas Day with his wife, Jamie and Laila. It was around this time his cough started. He dismissed it as ‘something going around’. Within months he was too weak to stand in the shower, became breathless, and started feeling ‘down and depressed’

Mr Walker spent his final days in hospital breathing via a machine. He also lost his appetite and could only manage a couple of mouthfuls of food a day.

He died surrounded by his sons Luke Walker, 31, and Barrie-John Walker, 24, and his daughter Kerrie Walker, 26.

Mr Walker’s funeral was attended by local football referees, who wore their kits and blew a ‘final whistle’ for the sports fan.

So many came to celebrate Mr Walker’s life, people had to gather outside the crematorium and listen to the service on speakers.

‘Trevor was one of those people – everybody knew him and everybody loved him,’ Mrs Walker said.

‘He would do absolutely anything for anybody. If he only had a tenner to his name and you needed a tenner, he would give it to you.’ 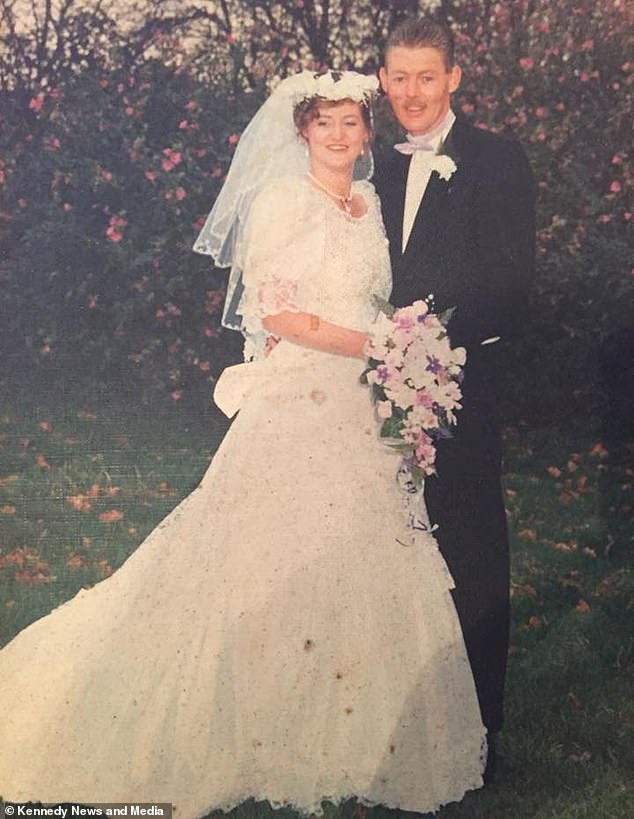 Mr and Mrs Walker are pictured on their wedding day 25 years ago. The couple met at the pub when he would play darts and she worked behind the bar. ‘I just loved the look of him,’ she said

Pictured together before his diagnosis, the couple were determined to fight the disease

Mrs Walker was instantly drawn to her late husband when the couple met 32 years ago in a pub.

‘He used to play darts and I worked behind the bar,’ she said. ‘I just loved the look of him. He was full of confidence and had great banter.

‘I always joked Trevor had four loves in his life – his grandchildren, the children, football and me, in that order.

‘But all the guys from his work tell me he was always talking about me and that he was so in love.

‘He put me on a pedestal. I couldn’t do anything wrong in his eyes and neither could our children.’ 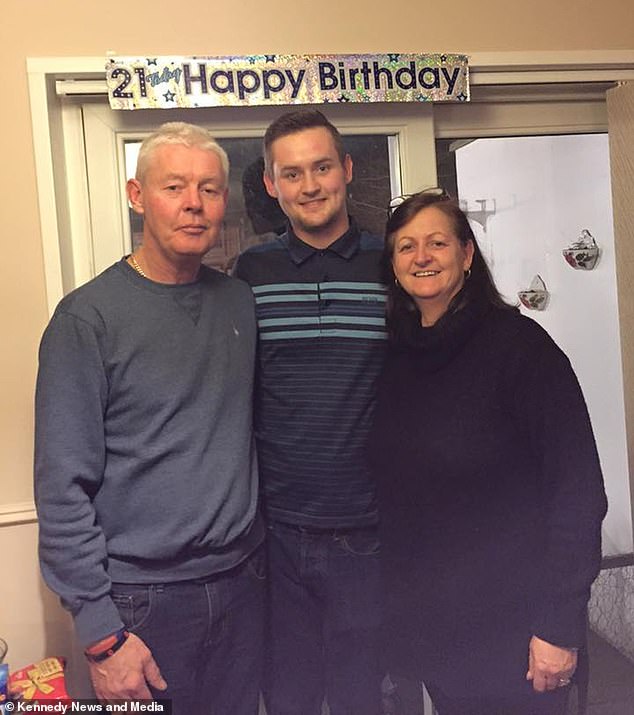 Mr Walker (pictured with his wife and their son Barrie-John on his 21st birthday) was ‘loved by everybody’. His funeral was so well attended people had to stand outside and listen to the service on speakers. Local football referees attended in their kits 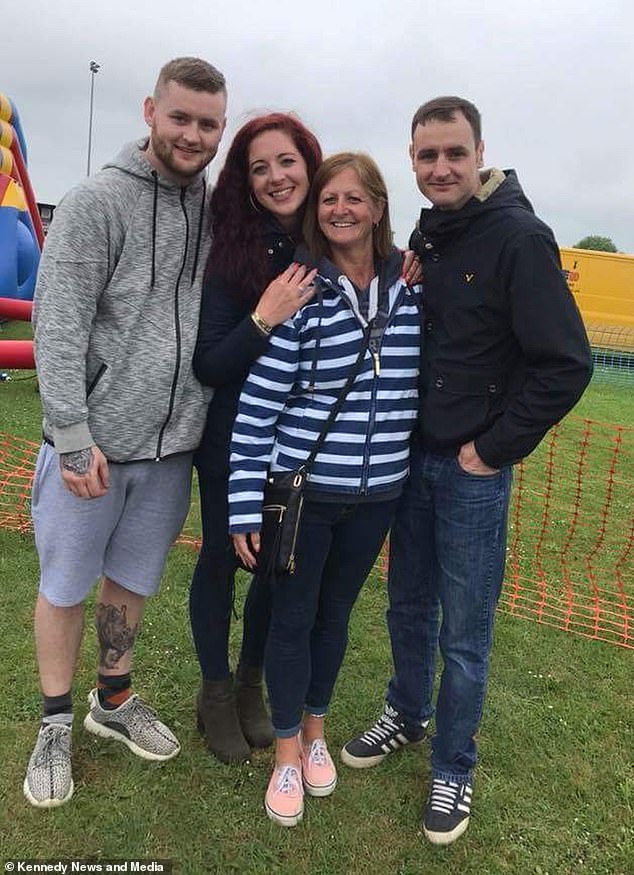 Mrs Walker is speaking out to warn people even ‘healthy’ sports fans can get cancer.

‘[My husband] was a very healthy young man,’ she said. ‘He was very fit. He was tall and slim. He hadn’t smoked for more than 30 years. He wasn’t a heavy drinker. He was conscious of what he ate.

‘He was a football referee so he was always running around the pitch, usually three or four times a week, as well as working.’

Mrs Walkers also wants to spread the word cancer does not always cause the symptoms people may expect.

‘Since Trevor’s diagnosis I have gone over the symptoms of bowel cancer but he didn’t have any of them,’ she said.

‘Although the symptoms are there as a guide, there’s always going to be exceptions to the rules and that’s what people need to think about more.

‘If I come across anyone now with a persistent cough, I tell them to make sure they get it checked out by a doctor.

‘It’s so easy to just brush it off as just a cough, especially when you see that everyone has one.

‘But actually now I know it’s not always going to be fine. A persistent cough can be a sign of something really serious.’