Doctors may save more lives BLINDFOLDED: Study finds paediatricians who take on the #BirdBoxChallenge are better leaders when a youngster goes into cardiac arrest

Netflix was forced to issue a warning when the public started hurting themselves in the viral #BirdBoxChallenge.

But a new study suggests paediatricians may save more lives if they take inspiration from the thriller.

When simulating resuscitation on a child dummy following a ‘cardiac arrest’, the blindfolded doctors scored better on their leadership skills.

The researchers believe being blindfolded may improve communication between medics. 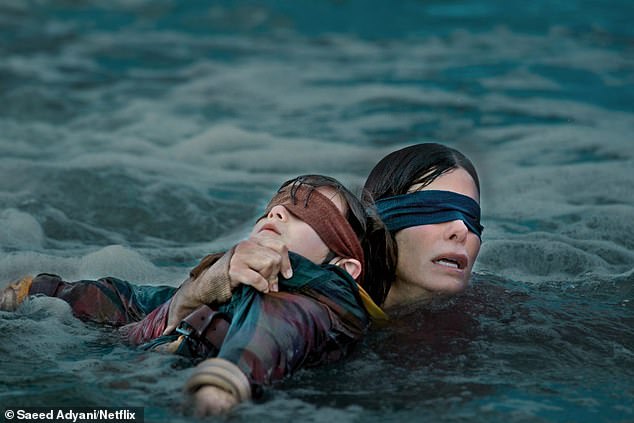 A new study suggests that if paediatricians took on the #BirdBoxChallenge they may save more children from cardiac arrest. Sandra Bullock’s character Malorie Hayes is pictured swimming to safety with her son Boy in the Netflix thriller released in November last year

The research was carried out by Geneva University Hospital and led by Dr Michael Buyck, of the paediatric emergency department.

Thankfully, children rarely go into cardiac arrest, with around eight cases for every 100,000 youngsters, the authors wrote in the journal Frontiers in Pediatrics.

But this makes it difficult for junior doctors to be trained in paediatric resuscitation.

‘Fifty per cent of residents report feeling inadequately trained to lead cardiac arrest teams in an internal medicine study because such events are too rare,’ the authors wrote.

Simulation training is therefore often used to prepare paediatricians for these medical emergencies.

‘Some authors have evaluated the effect of blindfolding the leader, although not in a randomised controlled trial,’ Dr Buyck said.

WHAT IS THE BIRD BOX CHALLENGE?

The #BirdBoxChallenge went viral after the Netflix thriller starring Sandra Bullock saw a desperate mother blindfold herself and her children for their safety.

If the characters look at the film’s mysterious villains, they are driven mad and kill themselves.

The film’s popularity inspired fans to create the #BirdBoxChallenge, where they would attempt everyday tasks blindfolded.

But this resulted in injury, with people running into walls or dangerously close to traffic.

Netflix later warned fans: ‘Can’t believe I have to say this, but PLEASE DO NOT HURT YOURSELVES WITH THIS BIRD BOX CHALLENGE.

‘We don’t know how this started, and we appreciate the love, but Boy and Girl have just one wish for 2019 and it is that you not end up in hospital due to memes.’

Boy and Girl are the names of Bullock’s character’s children.

‘Our objective was to evaluate the effect of blindfolding the team leader on leadership skills, using a randomised controlled trial design.’

A randomised control trial involves allocating a similar number of people to different groups to test a drug or treatment.

One group has the intervention being tested, while the other has an alternative drug, placebo or nothing at all.

The groups are then followed up to see how effective the experimental drug really was.

The researchers assigned 12 paediatric teams to either wear a blindfold or carry out resuscitation as normal.

Each team had a ‘leader’, who did not carry out the chest compressions but advised the rest of the medics.

‘Expert evaluators’ rated the skills of the leaders, with those who were blindfolded scoring higher.

‘Having a blindfolded leader requires other team members to verbalize all the important data and explicitly acknowledge instructions,’ Dr Buyck said.

‘We found that teams who trained with a blindfolded leader became more likely than controls to respond to instructions with audible confirmation of receipt and completion of the task.’

And being blindfolded may help doctors stay focused.

‘Blindfolding might improve leadership skills by helping the leader to avoid distraction by irrelevant details or participation in procedures, such as chest compressions,’ Dr Buyck said.

The researchers add, however, their study was small, with further trials being required.

‘Larger trials with long-term follow-up are warranted based on these promising initial results,’ Dr Buyck said.

Following its release in November last year, Bird Box became an internet obsession, with people attempting to do tasks blindfolded to be like Sandra Bullock’s character.

‘Can’t believe I have to say this, but: PLEASE DO NOT HURT YOURSELVES WITH THIS BIRD BOX CHALLENGE,’ Netflix tweeted.

‘We don’t know how this started, and we appreciate the love, but Boy and Girl have just one wish for 2019 and it is that you not end up in the hospital due to memes.’

The film tells the story of a mother (Bullock) and her two children, named Boy and Girl, who are forced to wear blindfolds while they search for refuge in a world overrun by villains that drive people to kill themselves with just a glance.