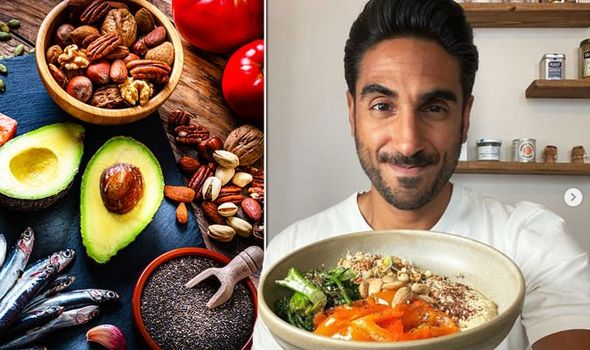 Dementia is a group of symptoms negatively impacting memory. Alzheimer’s, on the other hand, is a disease. It slowly impairs memory and brain function.

Dr Rupy commented on the link between the gut, food, and dementia.

Some foods have been linked to risk of the illnesses.

Dr Rupy, who has appeared on the likes of ITV’s This Morning and founded The Doctor’s Kitchen, said: “There’s certainly a relationship between food and Alzheimer’s and dementia.

“Most medical issues we’re really just learning about, dementia and Alzheimer’s in particular.

“When it comes to diet, there have been some studies looking at the Western diet.”

The expert, who also recently discussed the best foods to eat to get enough vitamin D, said many facets of the Western diet have “an association” with dementia and Alzheimer’s.

“The Westernised diet is low fibre high, high refined carbohydrates and high on the insulin inflammatory index, which is related to type two diabetes – the dysregulation of sugar balance because of a number of lifestyle issues.

“There is certainly an association there.”

So what should people eat for longevity and brain health, according to Dr Rupy?

He suggested: “A pragmatic decision would be to look at the longest living people on Earth, figure who of those get the least amount of dementia, and figure out what those guys eat.

Evidence in testing has shown a diet high in veg and fruit and low red meat and sugar can reduce dementia risks.

Those who took part in the study and ate a diet high in unsaturated fats, fish, fruits, and vegetables and low in dairy, red meat, and refined sugar, performed better in memory tests than those who didn’t.

The diet has other benefits including being good for heart health and weight loss.

Dr Rupy discussed the effects of diet on longevity in different parts of the world.

He suggested diet is not the only part of the lifestyle contributing to longevity.

“So, in a lot of cases, in these blue zones such as Costa Rica, Sardinia, Okinawa, wherever we find the highest concentration of centenarians, not only do they have a really good plan for diet, they will move a lot, they have strong links with the community, they generally have agreed to clean all these things publically consigned for them to live lives.

“And so, that’s more than likely why.

“If there were specific nutrients I would suggest these people eat, certainly they will tend to have like some probiotic food in their diet, whether it be kimchi or salted fish, or sauerkraut.

“And they tend to have all these traits in the diet so that’s kind we want to be teaching people to eat as well.”

Nutritionist Rosie Millen recently discussed the best vitamins and supplements to take during autumn and winter.