Nearly two thirds of office-based physicians are engaged in some form of electronic health information exchange (HIE), and three quarters of those who exchange data say they have experienced improvements in quality of care, practice efficiency, and patient safety as a result, according to a new study from the Office of the National Coordinator for Health IT (ONC).

The data analysis from an annual survey by the Centers for Disease Control and Prevention (CDC) also showed that the percentage of physicians electronically finding or querying patient information reached 49% in 2019, a 40% increase from 2015.

But other domains of interoperability did not grow much, if at all.

“The progress of interoperability is still incremental,” commented Julia Adler-Milstein, PhD, professor of medicine at the University of California San Francisco and director of its Center for Clinical Informatics and Improvement Research, in an interview with Medscape Medical News. “Every year, things are getting better on both the ambulatory practice and the hospital side, but it’s not dramatic progress. We have to just keep chipping away at the facets of this problem.” 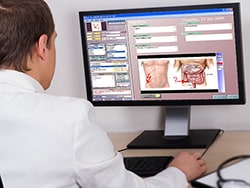 Among the most commonly reported benefits experienced by physicians engaging in HIE were related to improving care quality (84%) and care coordination (83%). Eight in 10 of the physicians who exchanged information said it reduced duplicate test ordering. Seventy-six percent of the doctors said that HIE had increased their practice’s efficiency.

However, 85% of the physicians who engaged in HIE reported challenges in electronically exchanging information with providers who used electronic health records (EHRs) that were of a different type than their own EHR. At least 70% of physicians who engaged in HIE reported that some providers in their referral networks lacked the capability to exchange data. Fifty-five percent of the HIE participants said electronic exchange involved additional costs, and 37% said that they had limited or no IT staff to implement it.

More than half of physicians reconciled medications, allergies, and problem lists using data received from another provider in 2018. Seventy-nine percent of doctors who engaged in HIE said that it prevented medication errors.

Twenty-seven percent of the physicians sent care summaries; 31% of the doctors received these clinical summaries, and 39% searched or queried for them.

ONC also looked at how physicians used the four domains of interoperability, which include electronically sending, receiving, finding, and integrating health information into the EHR. The percentage of physicians who did all four of these things remained flat at about 10% from 2015 to 2019. Similarly, there was not much change during the 4-year period in the percentage of physicians who sent (34%), received (35%), and integrated (29%) information.

Explaining the rapid growth in the percentage of physicians who reported electronically searching or querying for health information when seeing a new patient, the study authors said, “The increase is likely related to specific EHR developers offering capabilities to search for patient health information from within their network of users, as well as increased engagement in national networks that help facilitate query-based exchange.”

Another factor in the increase of doctors searching for outside patient records may have been queries for immunization records and prescription histories relevant to substance abuse, Adler-Milstein said. She also pointed to the increased availability of records in other networks through national exchanges such as Carequality and CommonWell Health Alliance.

The study showed that physicians in large groups (more than 50 doctors) increased their use of electronic data exchange significantly, while in smaller groups the percentage of physicians engaged in interoperability remained mostly unchanged from 2015 to 2019.

The same correlation with practice size was seen in the percentage of doctors who had electronic access to information from outside sources and the portion of physicians who used that data at the point of care. The national average for those two data points was 36% and 26%, respectively. In groups of more than 50 doctors, the percentages were 55% and 44%, respectively, while for solo practitioners, just 23% had access to this information and only 13% used it in their practices.

The more extensive use of interoperability by larger groups can be explained by their greater resources and health IT expertise, Adler-Milstein noted. “The places that are doing more of this are the ones that have invested in more advanced EHRs and have taken the time to figure out how to configure them and design the workflow around them. That takes a savvy practice with resources, and those are going to be the bigger, more resourced groups.”

The study also compared the characteristics of physicians who engaged in HIE and those who did not. Seventy-eight percent of doctors employed by medical and academic centers participated in HIE, compared with 60% of those in those in physician-owned organizations. Seventy-two percent of primary care physicians (PCP) engaged in HIE, compared with 61% of surgical and 55% of medical specialists.

Primary care physicians are more likely to exchange and query for data, Adler-Milstein noted, “because they’re trying to manage the whole patient and need to get a picture of what’s going on with them. A cardiologist doesn’t need to know a patient’s whole medical history. They just need to know what’s relevant to the heart condition. Whereas if someone is discharged from a hospital, where are they going to go? They’re supposed to see their PCP within 7 days, so he’s going to need to know what happened in the hospital or why that person was hospitalized. So, in almost every use case for interoperability, the PCP is front and center.”

Physicians who belonged to various types of reform-oriented organizations were also more likely to engage in HIE than those who were not involved in an advanced alternative payment model, pay for performance, an accountable care organization, or a patient-centered medical home. Physicians who accepted Medicaid were more likely than those who didn’t to engage in HIE. So were those who participated in the Centers for Medicare and Medicaid Services Promoting Interoperability Program or the Medicaid EHR Incentive Program.

The authors said that technological barriers to HIE were likely responsible for the lack of progress in three of the four domains of interoperability.
“Physicians reported using multiple systems to enable exchange, difficulties with cross-vendor exchange, and gaps in the use of interoperable technology by other providers in their referral network,” they noted.

Recent regulatory changes may help reduce those barriers over time, they said. Pursuant to the 21st Century Cures Act, they noted, ONC has issued a rule requiring the adoption of new application programming interfaces (APIs) in EHRs. These APIs use a new standards framework known as Fast Healthcare Interoperability Resources (FHIR) that can be used to promote structured information exchange between disparate EHRs.

In addition, they noted, ONC recently launched its Trusted Exchange Framework and Common Agreement (TEFCA), which may simplify exchange by enabling organizations to connect to multiple health information networks under one common umbrella.

All of these efforts will contribute to the solution, Adler-Milstein said, but we’re not yet to the point where most physicians can obtain individual data elements, such as a medication, an allergy or a blood pressure reading, from a disparate EHR. What that means, in many cases, is that a physician who wants to see a patient’s last HbA1c value must query for a care summary, which might be a 10-page document, and then wade through it to find the one piece of information he or she needs.

The first part of the solution, she says, is to overcome this technological barrier. Then the EHR must be designed and configured to make it easy for the doctor to ask the right questions and get the information he or she is seeking.

Ken Terry is a healthcare journalist and author. His latest book is Physician-Led Healthcare Reform: A New Approach to Medicare for All.