Doctors will generally encourage you to lower your cholesterol to improve your heart health – there may be such a thing as too low, new research reveals.

People whose LDL cholesterol falls below 70 may actually be at greater risk of a stroke than those whose LDLs are below 100 but over 70, according to a Pennsylvania State University study published Tuesday.

In addition to being better for overall heart health, low cholesterol is particularly helpful to reduce the risk of an ischemic stroke, which occurs when a blood vessel gets clogged, blocking blood flow to the brain.

But cholesterol that falls too far was linked to 169 percent higher risk of hemorrhagic stroke – the result of a blood vessel becoming weak, and bursting – in the new study. 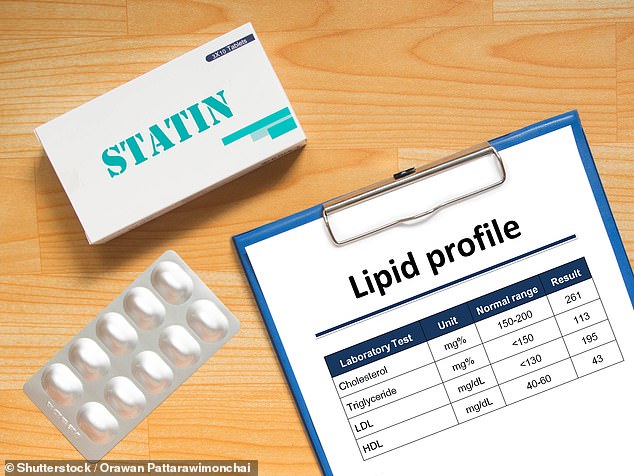 Heart disease is considered the number one cause of death in the US, but that actually consists of a network of cardiac problems, including cardiac arrest, congestive heart failure, high blood pressure itself and stroke.

Hemorrhagic strokes are the less common but more fatal than ischemic ones.

These breaks in weakened blood vessels account for just 15 percent of all strokes in the US, but are the culprit in about 40 percent of stroke deaths.

The American Heart Association’s (AHA) broadest and best known advice is to keep everything low: low blood pressure, low cholesterol, low sodium and so on.

Cholesterol builds up inside the blood vessels such that the heart has to work harder to pump blood through them.

Once the vessels are lined with lipids, clots are more likely to become stuck, blocking off the flow of blood, and therefore oxygen, to the brain and causing a stroke.

The AHA recommends Americans keep their cholesterol levels below 100 mg/dL (although 100-129 mg/dL is not seen as worrisome for those who don’t have a health problem).

But there isn’t such clear guidance on what the minimum cholesterol level should be.

The new study suggests that, perhaps, there should be.

Bad, or LDL cholesterol, can be reduced by cutting your intake of red meats, and full fat dairy products, knocking out foods with trans fats – like baked goods, cakes and crackers – from your diet and boosting fatty acid and fiber intake.

In the study of 96,043 participants, the Penn State researchers found that we can tip the scales too far the other direction, and that all things really are best in moderation.

‘As is true with many things in nutrition, moderation and balance is key when deciding the optimal target level of LDL cholesterol,’ said Dr Xiang Gao, a nutritional sciences professor and study co-author.

‘You can’t go to either extreme — too high or too low. And if you’re at a high risk for hemorrhagic stroke due to family history or risk factors like high blood pressure and heavy alcohol drinking, you may want to be extra careful about LDL cholesterol levels.’

Those with LDL levels below 50 mg/dL are about 169 percent more at-risk for hemorrhagic stroke compared with those between 7p and 99 mg/dL.

‘This observation, if confirmed, has important implications for treatment targets,’ said Dr Gao.