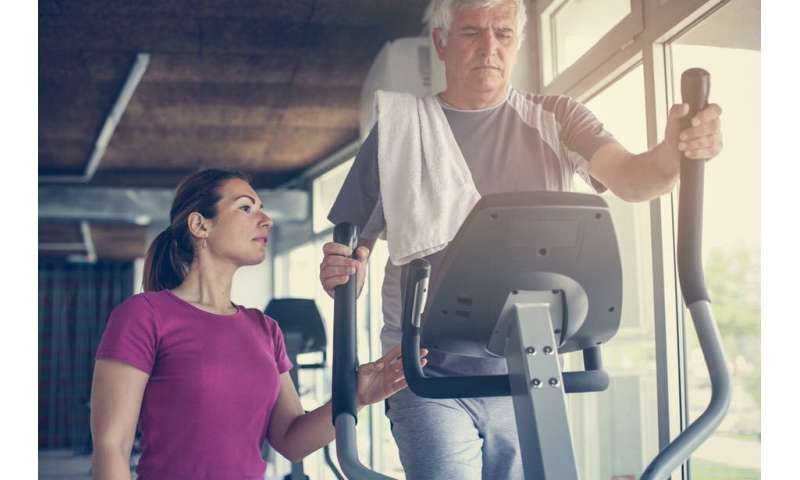 Being diagnosed with a heart condition or suffering a heart attack can be terrifying. In the UK, one person is admitted to hospital because of a heart attack roughly every five minutes. Low physical activity, poor diet, and stress can all increase heart disease risk. But cardiac rehabilitation programs aim to help people who have a heart condition improve their heart health by targeting these lifestyle factors.

Exercise is a major part of this process – exercise cardiac rehab programs encourage patients to take part in gym or circuit-based fitness classes two to three times a week, for a period of eight weeks. These classes can have a profound effect on quality of life by improving fitness and reducing the need for hospital re-admission.

But it’s not clear if patients attending UK exercise cardiac rehab actually achieve these benefits. This is potentially down to a gap between the exercise dose that’s prescribed, and the amount achieved.

It’s also recommended that patients achieve a heart rate reserve (the difference between a person’s resting heart rate and their predicted maximum heart rate) between 40% and 70% for 20 minutes when attending classes. However, it can be unclear whether patients actually achieve this heart rate in reality.

And while cardiac rehab programs encourage patients to sign up for or complete a full course of rehab, it’s less certain how many actually carry out the program as intended. This means we don’t know if the current exercise prescription is useful in improving health and fitness.

In fact, helping people to carry out their cardiac rehab correctly is more important than ever, with many exercise sessions now held online due to COVID-19. This means participants have less supervision than a traditional exercise class, leaving more margin for error.

Our research aimed to explore the health benefits of taking part in exercise cardiac rehab, based on how much exercise participants undertake and how hard they exercise for. We investigated whether cardiac rehab actually improved fitness, vascular health and habit change.

We specifically looked at 60 patients from Leeds who were referred to a six-week program. This program involved attending two circuit-based fitness classes a week based in leisure centers. The patients’ vascular health, physical activity levels and fitness (assessed via a shuttle walk test, for which patients have to walk 10m in an allotted time) were recorded at the beginning and the end of the program. Heart rate measurements were taken while they were exercising.

Our measurements found participants were exercising at the lower end of the prescribed intensity level—only just meeting recommendations. The program only lasted six weeks as well, which is below the standard eight week requirement of most exercise programs. Importantly, the time patients spent exercising at moderate to vigorous intensity was less than optimal, and did not improve their physiological or vascular health.

While many patients reported feeling more confident and fitter as a result of the program, it’s also clear their outcomes could have been better. However, we believe small changes to the structure of exercise sessions could help patients achieve much greater health benefits.

In the original sessions patients were instructed to complete a two-minute bout of moderate to vigorous cardiovascular exercise such as cycling, jogging and side steps, alternated with one-minute of more restful activity, such as performing strength exercises with light dumbells, for a total of 24 minutes.

But the time spent performing exercise on the cardiovascular exercise stations isn’t actually long enough for participants to raise their heart beat to the required heart rate. By extending the vigorous bouts of exercise to three or four minutes, patients may be better able to increase their heart rate, and more likely to fully benefit from cardiac rehab.

Another reason why some patients don’t fully benefit from cardiac rehab is because they don’t complete a full exercise program. While it can be difficult for people to change their lifestyle, knowledge can be power when trying to motivate healthy behaviors.

Helping participants understand the targets they should aim for, and providing the tools to do this (such as a heart rate monitor) can increase exercise intensity, enjoyment and commitment, as can encouragement from staff. Indeed, giving people specific feedback on their performance has been shown to help people engage more in their exercise.It also increases their sense of achievement from week to week.

Measurable goals and progress give people a tangible measure of success, and could help them keep working hard even if they begin to feel less motivated. Thinking about the wider impact of exercise – such as how being health sets a good example for our family and friends—can create a stronger form of motivation. Creating a routine with specific cues and rewards – such as exercising after work every week on a Tuesday—also helps make the decision to exercise more automatic, and therefore easier.

Our research makes clear that there can be a significant gap between recommendation and reality. But making small changes—such as to the length of intense exercise—can make a substantial difference to people’s success and health.