Senior Biden officials have been privately lobbying the WHO to rename monkeypox for months because the original ‘is racist’, sources say

The Biden administration has asked global health officials to rename monkeypox ‘MPOX’ because the current name is racist, according to reports.

Senior White House officials are said to have been privately lobbying the World Health Organization over the change, and even threatened to change the name in the US without the agency’s blessing if it did not move quickly enough.

Monkeypox caused a global outbreak for the first time ever this year — infecting 30,000 Americans and killing 14 — but the virus has been triggering flare-ups in Africa for decades.

The WHO promised to re-consider the name in June over similar fears of stigmatization and a decision is expected within weeks.

There have been concerns over potential racist undertones of the name since the outbreak began this summer.

It comes after a study found monkeypox patients can spread the virus up to four days before symptoms appear, raising questions over current strategies to contain the infection. 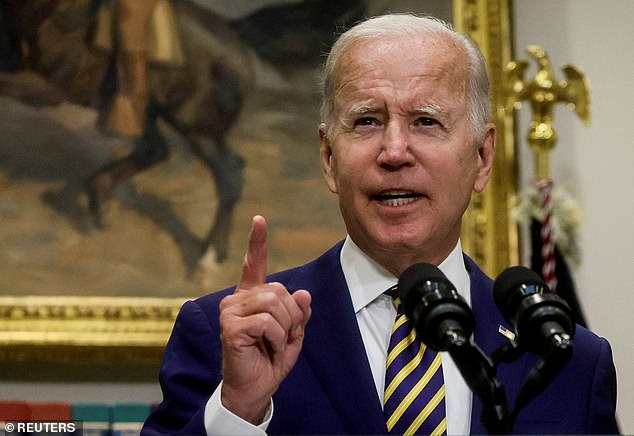 The Biden administration is lobbying the World Health Organization to change the name of monkeypox. Pictured above is Biden in the White House Roosevelt Room in August this year

US was recording about 500 monkeypox cases a day in July. But this has now dropped to less than 13 amid rising awareness and a rapid vaccination drive

According to Politico, Biden staff were concerned the name ‘monkeypox’ was putting some Americans off getting vaccinated.

In August, more than 30 scientists wrote to the WHO saying ‘continued reference to, and nomenclature of this virus being African is not only inaccurate but is also discriminatory and stigmatizing’.

They added: ‘The most obvious manifestation of this is the use of photos of African patients to depict the pox lesions in mainstream media in the global north.’

The WHO has been considering a number of new names, including ‘MPOX’, ‘Mpox’ and ‘orthopox “something” ‘.

In August the WHO renamed the two dominant variants of the virus, to Clade I and Clade II. Beforehand, they were called the Central African and Congo Basin clades.

Monkeypox was named in 1958 after it was identified in monkeys imported to Europe from Africa.

The US now has a handle on the outbreak, with about 13 cases being reported every day on average. At the peak in July there were more than 400 cases a day.

Monkeypox patients can spread the virus up to four days before symptoms appear, a UK study found.

In the first evidence of its kind, the researchers said pre-symptomatic transmission might be much more ‘substantial’ than previously thought.

The study, in the British Medical Journal, included 2,746 people who tested positive for monkeypox in the UK.

Patients were aged 37.8 years on average and 95 per cent were gay or bisexual men. They were found with routine surveillance and contact tracing questionnaires.

Researchers looked at the time it took from when first symptoms occurred in the first patient to when symptoms developed in a known contact.

They also looked at the incubation period — the time from exposure to the virus to the onset of symptoms.

The team found it took up to 7.8 days for symptoms to appear after a patient was first exposed.

But many contacts were infected before symptoms started to appear in the initial case.

Writing in the journal, they said: ‘Four days was the maximum time that transmission was detected before symptoms manifested.’

Independent experts described the results as ‘convincing’ and said they raise ‘urgent questions’.

Dr Boghuma Kabisen Titanji, assistant professor of medicine at Emory University in Atlanta, said: ‘What proportion of cases are asymptomatic and how much do these cases contribute to seeding new transmission chains? These are urgent questions that need answers.’