Only one in ten Australian adolescents say they meet the World Health Organisation's guidelines for daily physical activity, making them some of the least active in the world.

A first-ever global report, published in Lancet Child & Adolescent Health on Friday, has ranked Australia at 140 of 146 countries for adolescent physical activity. 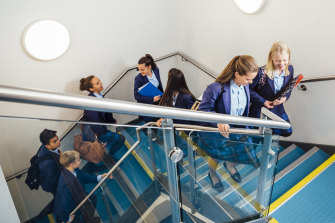 Only one in ten Australian adolescents say they meet the World Health Organisation’s guidelines for daily physical activity.Credit:iStock

Eighty-nine per cent of Australian 11- to 17-year-olds reported failing to perform at least an hour of physical activity per day in 2016, as stipulated by the WHO guidelines, a slight increase from 87 per cent in 2001.

Young women were slightly more inactive than their male peers, with 91.4 per cent failing to meet the guidelines compared to 86.8 per cent of young men.

The report was based on self-reported surveys from 1.6 million school students aged 11 to 17, collected over a 15-year period. Australian data was drawn from Cancer Council Australia's National Secondary Students Diet and Activity survey and the ABS's National Nutrition and Physical Activity Survey and National Health Survey.

Students in New Zealand were similarly inactive, coming in two places higher in the country rankings. The country where students were most likely to meet the guidelines was Bangladesh (with 34 per cent achieving the daily target), followed by Slovakia (28.5 per cent), Ireland (28.2 per cent) and the US (28 per cent).

Professor Fiona Bull, director of the Centre for Built Environment and Health at the University of Western Australia and president of International Society of Physical Activity and Health, who lead the Australian component of the study, said the figures could be a conservative estimate as survey data can present a "bias towards socially desirable responses".

The WHO guidelines are mirrored in Australia's national guidelines for physical activity and sedentary behaviour, which recommends children and young people aged five to 17 years complete an hour or more of moderate to vigorous physical activity each day, with vigorous activity, including that which strengthens bones and muscles, three days each week.

Emeritus Professor Adrian Bauman from the University of Sydney's Sydney School of Public Health said the figures were consistent with, although indicating slightly higher rates of inactivity than, previous national and NSW research. However, he does not believe the report should indicate Australia is facing a drastically worse situation than the rest of the world.

"It is important to not miss the wood for the trees," he said. Although Australia's ranking was bad, he stressed only one country had more than a third of adolescents meeting targets and only two in ten adolescents worldwide reported getting enough physical activity.

"Actually, the problem is a global one."

According to rankings developed by not-for-profit Active Healthy Kids Global Alliance in November last year, Australia is one of the best countries in the world when it comes to engaging adolescents in organised sport and physical activity. However, Australian adolescents are less likely than overseas peers to take active transportation and more likely to engage in sedentary behaviour.

"The greatest decade of weight gain for Australians is post-school, aged 18-30. This is a direct precursor of that, so it is important to think about if we want to reverse the obesity epidemic."

This is particularly important for girls, who reported lower levels of physical activity than boys in all but four countries (Tonga, Samoa, Afghanistan and Zambia), Emeritus Professor Bauman said. Although Ireland and the US had higher rankings for physical activity, they also had a gender gap roughly three times that of Australia's (both over 15 per cent).

"It has been a problem for as long as I've been in research, over 30 years," he said, adding that body image concerns, social pressure and inequality in access to sport can result in this gap.

Professor Bull said the trend for young women to be less active than their male counterparts was "very concerning", particularly given how the gap has remained constant, if not slightly widened, in most countries over the 15 year period.

"More needs to be done to better understand why girls are less active and critically what can be done to change this situation," she said.