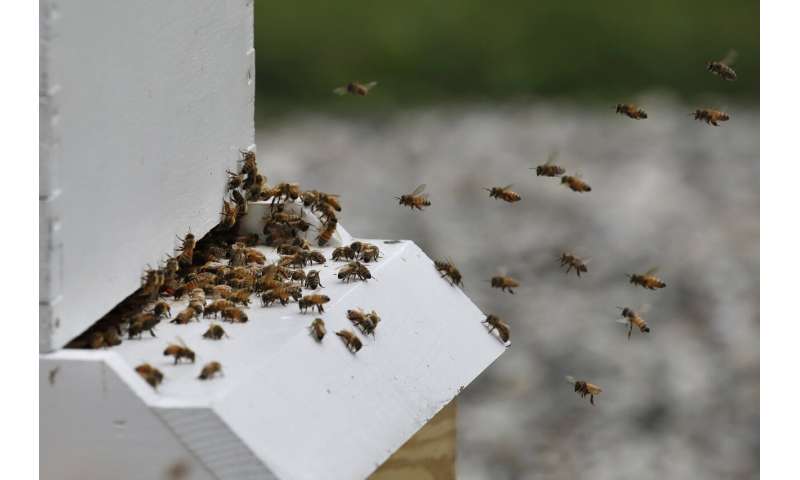 “This is really cool,” he said, pointing to a bee with blobs of orange pollen on its hind legs.

Ylitalo, who has battled PTSD after serving nearly 40 years in the military including two tours in Iraq, didn’t seem bothered by the bees swarming around his head or crawling all over the entrance to their hive. Instead, the 57-year-old logistics expert said the several hours spent working on the two hives each week at the Manchester VA Medical Center in New Hampshire was a respite of sorts from his anxiety and depression. Known as an apiary, the hives are located next to a lilac garden off a busy street.

“I’m in this program to help me get out of the thought process of all those problems that I have,” said Ylitalo, who has struggled since leaving the Army in 2017. “It helps me think of something completely different. … I’m just thinking about bees.”

Researchers are beginning to study whether beekeeping has therapeutic benefits. For now, there is little hard data, but veterans in programs like the one in Manchester insist that it helps them focus, relax and become more productive. The programs are part of a small but growing effort by Veterans Affairs and veteran groups to promote the training of soldiers in farming and other agricultural careers. 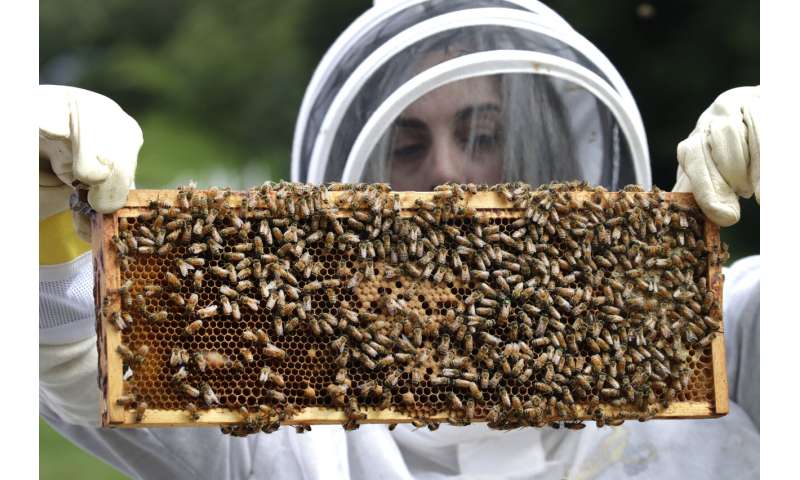 Standing near Ylitalo in her white bee suit, Army veteran Wendi Zimmermann said bees have helped her deal with the anxiety she feels outside her home—even though she initially feared being stung. She and Ylitalo are among 12 veterans that have taken part in beekeeping since the program started in May.

“It gives you a chance to shut down and not think about the outside world. It shows me there is a way to shut my brain down to get other things accomplished,” Zimmermann said. “Before, my mind would be filled with thoughts constantly and I wasn’t accomplishing daily tasks.”

While some of the programs are geared to giving soldiers the skills to become farmers and commercial beekeepers, others aim to address the challenges facing those returning home from Afghanistan and Iraq with brain injuries, post-traumatic stress disorder and other mental health issues. The programs are careful to say that beekeeping is just one of several benefits that could help a troubled veteran. 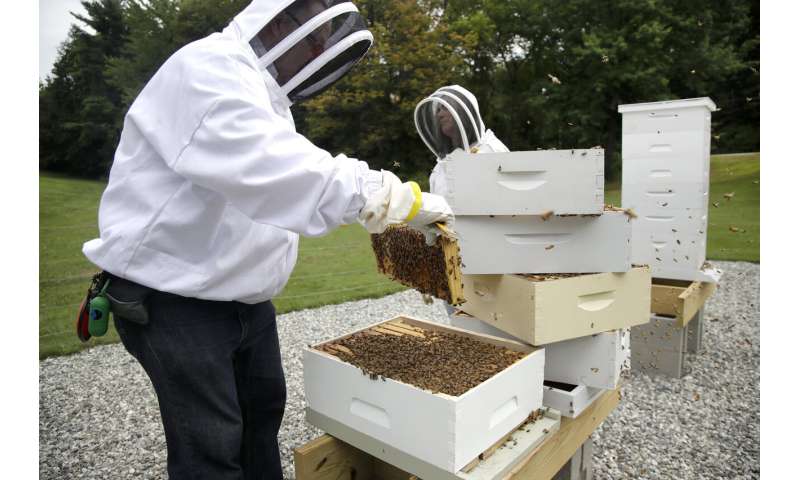 “The anecdotes we have heard are fantastic,” said Alicia Semiatin, who heads the mental health program in Manchester. “Folks find that it is really something that they benefit from at the time they are doing the beekeeping and the benefits seems to be carrying over not only for days but weeks afterward. What more could you ask for from treatment than something to that degree?”

Similar stories have been heard from beekeeping programs from Brockton, Massachusetts, to Reno, Nevada. Those running the programs said there is plenty of anecdotal evidence that beekeeping is making a difference for those who spend time managing hives and harvesting honey. Beekeeping gives them a sense of purpose, helps them relax and allows them to block out dark thoughts, they said.

“Beekeeping affords us the opportunity to really kind of engage in a different way with the natural world,” said Adam Ingrao, a fourth-generation soldier who runs Heroes to Hives through Michigan State University Extension. “You’re not thinking about what happened in Afghanistan or Iraq. You’re thinking about what’s happening right here, right now.” 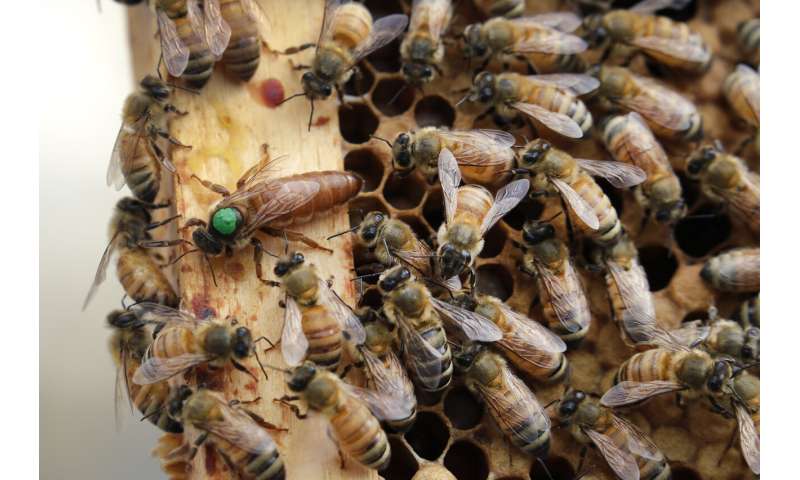 Ford Motor Co. is providing space to Heroes to Hives at Henry Ford’s old farm near Ann Arbor. The free program provides a nine-month beekeeping course to veterans, about 80% of whom have a disability.

In Reno, Ginger Fenwick started Bees4Vets with her husband, Daniel, in 2018 after spotting a 1919 pamphlet written by the government that advocated beekeeping for veterans returning from World War I with shell shock. Bees4Vets trains 10 veterans a year to manage some of its roughly 30 hives at the agricultural experiment station at the University of Nevada, Reno and resident’s backyards in nearby Sparks.

Inspired by concerns about high levels of suicide among veterans, the program focuses on those with PTSD or traumatic brain injuries from Nevada and northern California. It also has teamed up with a University of Nevada, Reno professor who studies PTSD to research whether beekeeping is helping veterans in the program. If a majority shows improvement, the program plans to study why and how—and whether beekeeping could be helping. 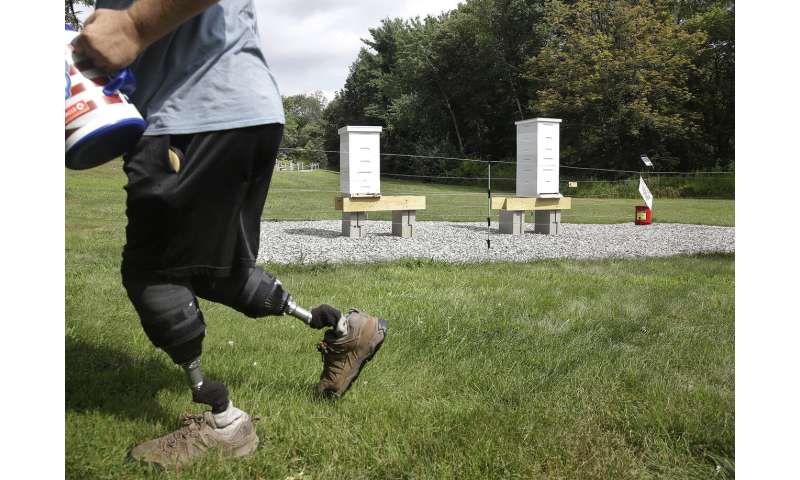 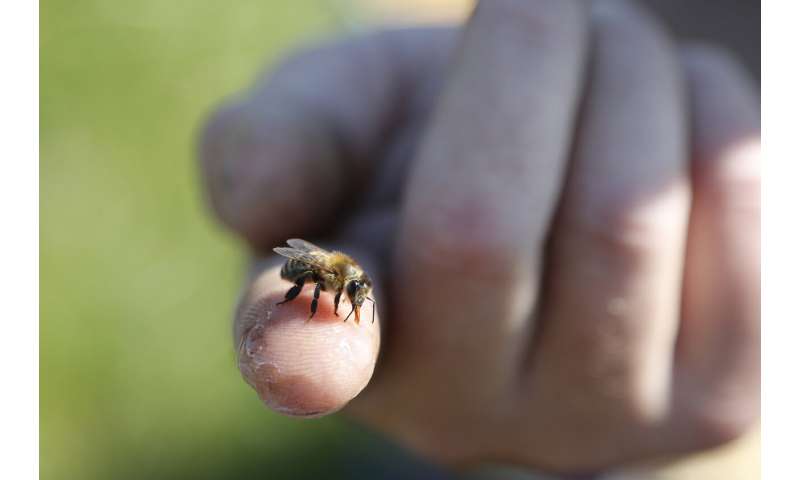 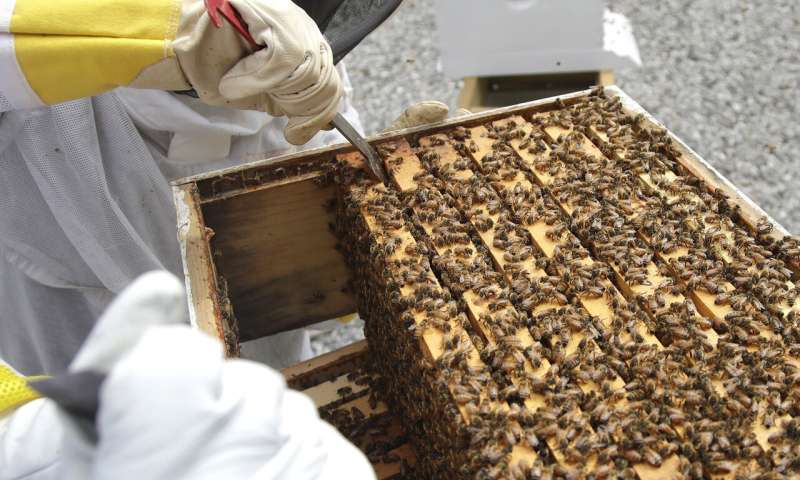 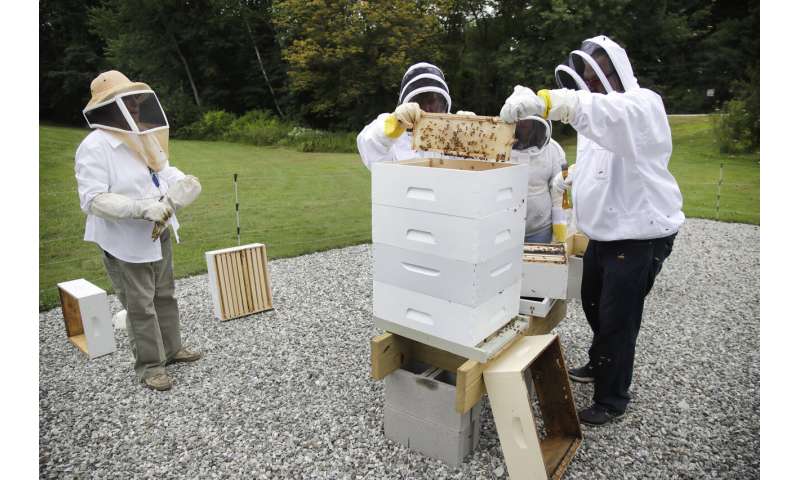 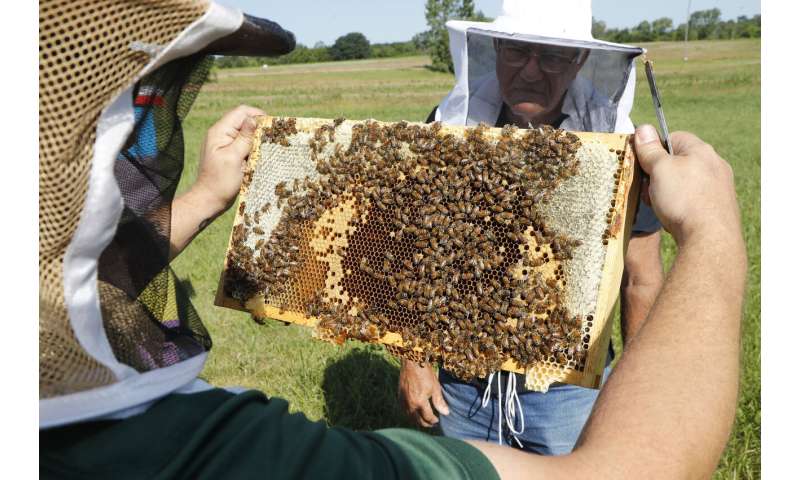 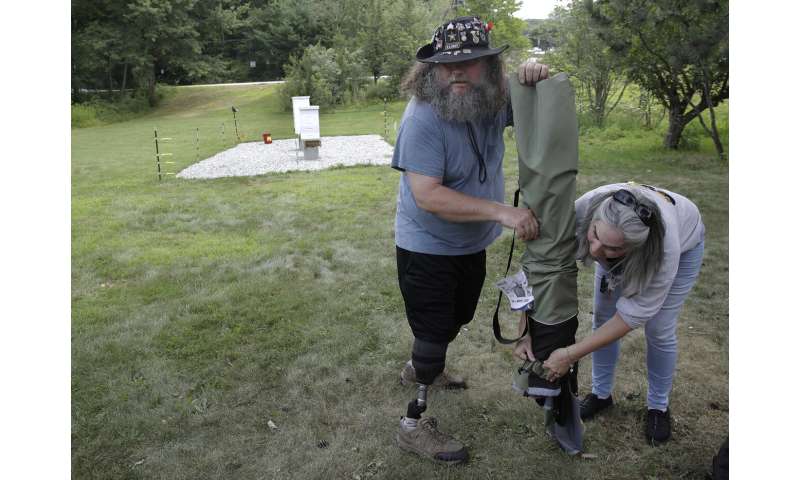 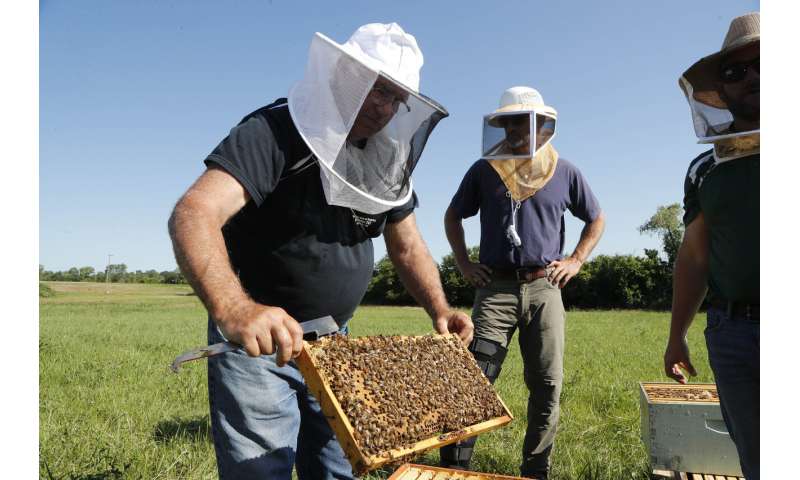 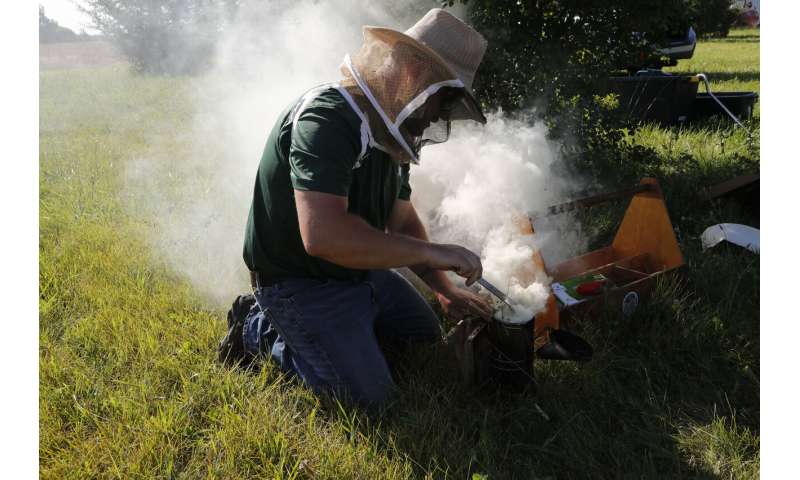 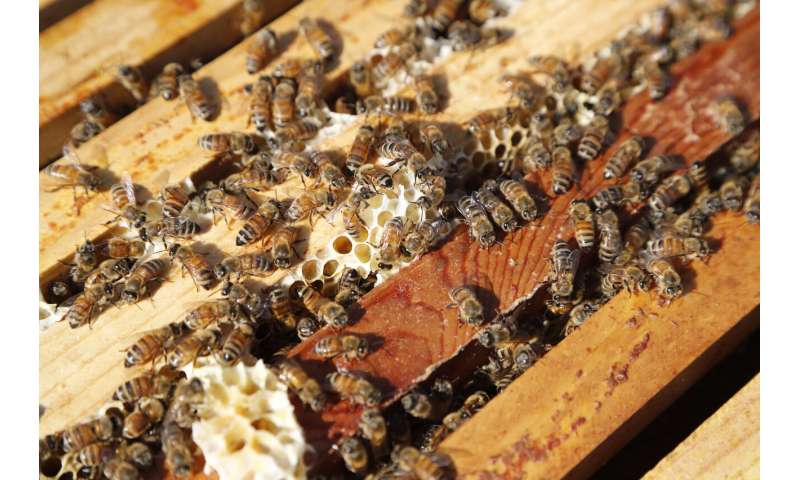 “If there was anything we could do to help one family, one person, then it would be all worth it,” Fenwick said.

Each veteran gets two hives to manage for the year and learns skills like honey harvesting and wax processing. One veteran who completed the program wants to start a honey mustard business; another wants to make lip balms using bee wax.

At the University of Minnesota, Rebecca Masterman runs its bee squad. One of its programs works with veterans who manage 18 hives on the grounds of the Minneapolis-St. Paul International Airport. She said the program’s main goal is to expose veterans to beekeeping, though it also promotes the therapeutic benefits of working with bees. She was cautious, however, about commenting on whether beekeeping could be treatment for veterans with PTSD.